in the middle of Hamburg

Planten un Blomen, yes, right, that’s North German dialect and means plants and flowers. Oops, that’s the official name for the park? Yes, it is, and has been since 1934, since the Low German Garden Show was held on a section of this huge park in the heart of the city. There’s plenty to discover on a tour of Planten und Blomen: in spring and summer, gorgeous flowerbeds, perennials, trees, streams, ponds, walk-through greenhouses, and a wide range of play and recreational activities. Just read on !

The contact with Frank via email and WhatsApp was very nice and pleasant. I had only briefly told Frank in keywords what I might like to see, and he had planned a nice route through the city on this...

The excursion with my Greeter Inge was very nice and I enjoyed it a lot. Thank you for that! Inge led me through many secret paths that I would never have found on my own and she told me about the...

Garden show in the center of the city 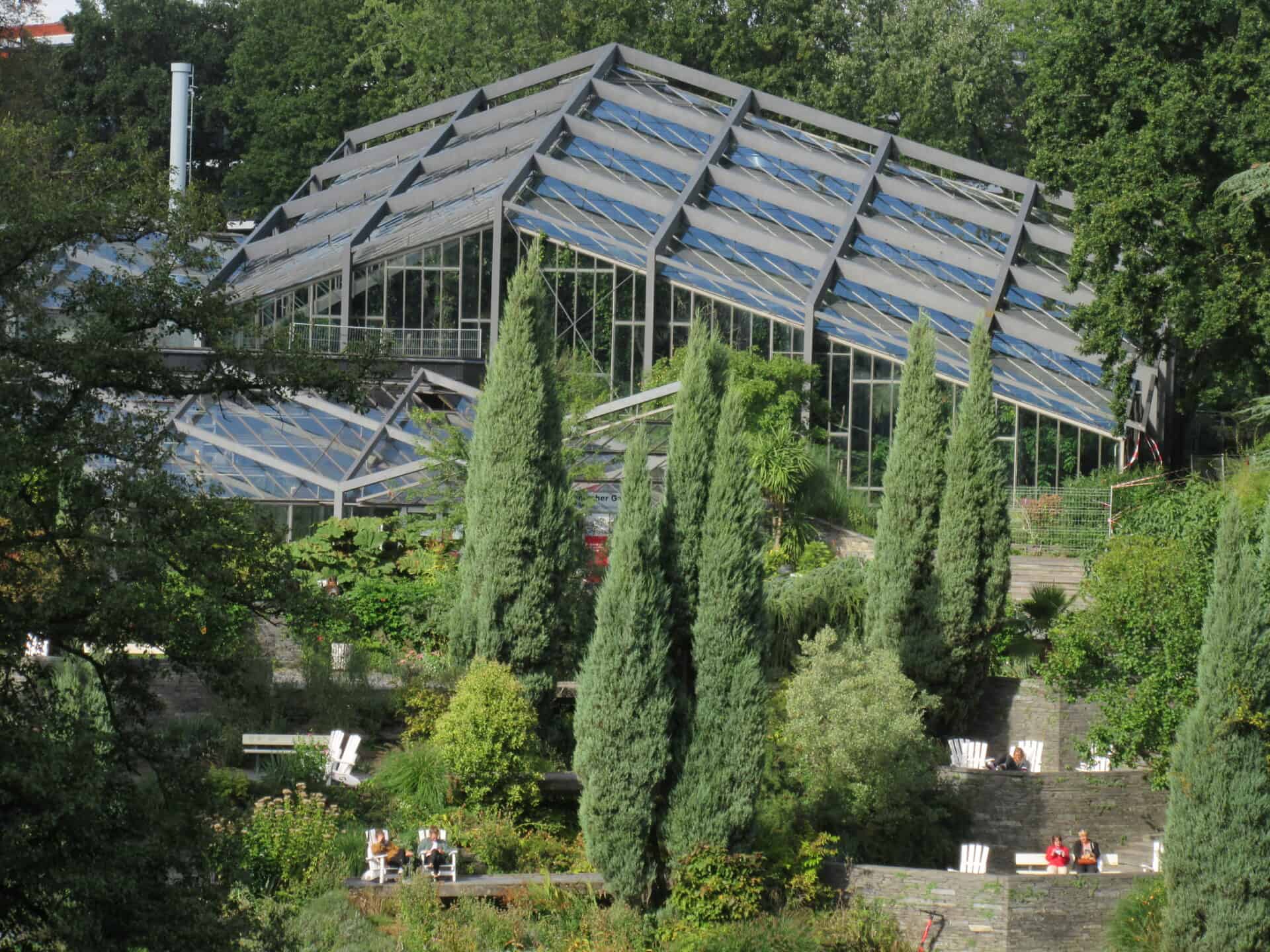 From the fortification to the park
If you go to the ice kiosk (opposite the casino) at Stephansplatz, you can take a look at the history of Hamburg, which is still alive here. You are in fact standing on the ground of the former bastion Rudolphus, which was built in the 17th century together with 21 other bastions and a rampart to protect Hamburg. In front of the rampart and the bastions there was a moat, which can still be seen here in its form. Since such defensive structures at the beginning of the 19th century could no longer hold off an enemy, one made of it – how beautiful ! – a park.

Alpinum and Mediterranean Terraces
Already in 1821, a botanical garden was created here, but it was initially a more formal educational and show garden. Later, around 1900, they designed the Alpinum, that is, a landscape reminiscent of mountains with the appropriate plants. For the International Horticultural Exhibition (IGA) in 1963, the Mediterranean terraces of slate with Mediterranean plants were added. Between pines, figs and clematis you can relax on the comfortable “Hummelstühlen”. By the way, the path around the moat is well equipped with explanatory panels.

Show greenhouses
Also to the IGA 1963 the show greenhouses were established. Their supporting structure is above the glass, resulting in a light-appearing spatial body. The interior is accessible to visitors. Note opening hours ! Particularly impressive is the tropical house, where it is naturally tropically warm and humid. There, orchids, palms, cacao trees and banana plants delight visitors. In other greenhouses, separated by glass doors, you can walk along numerous other exotic plants, including cacti, agaves, ferns and lemon trees. 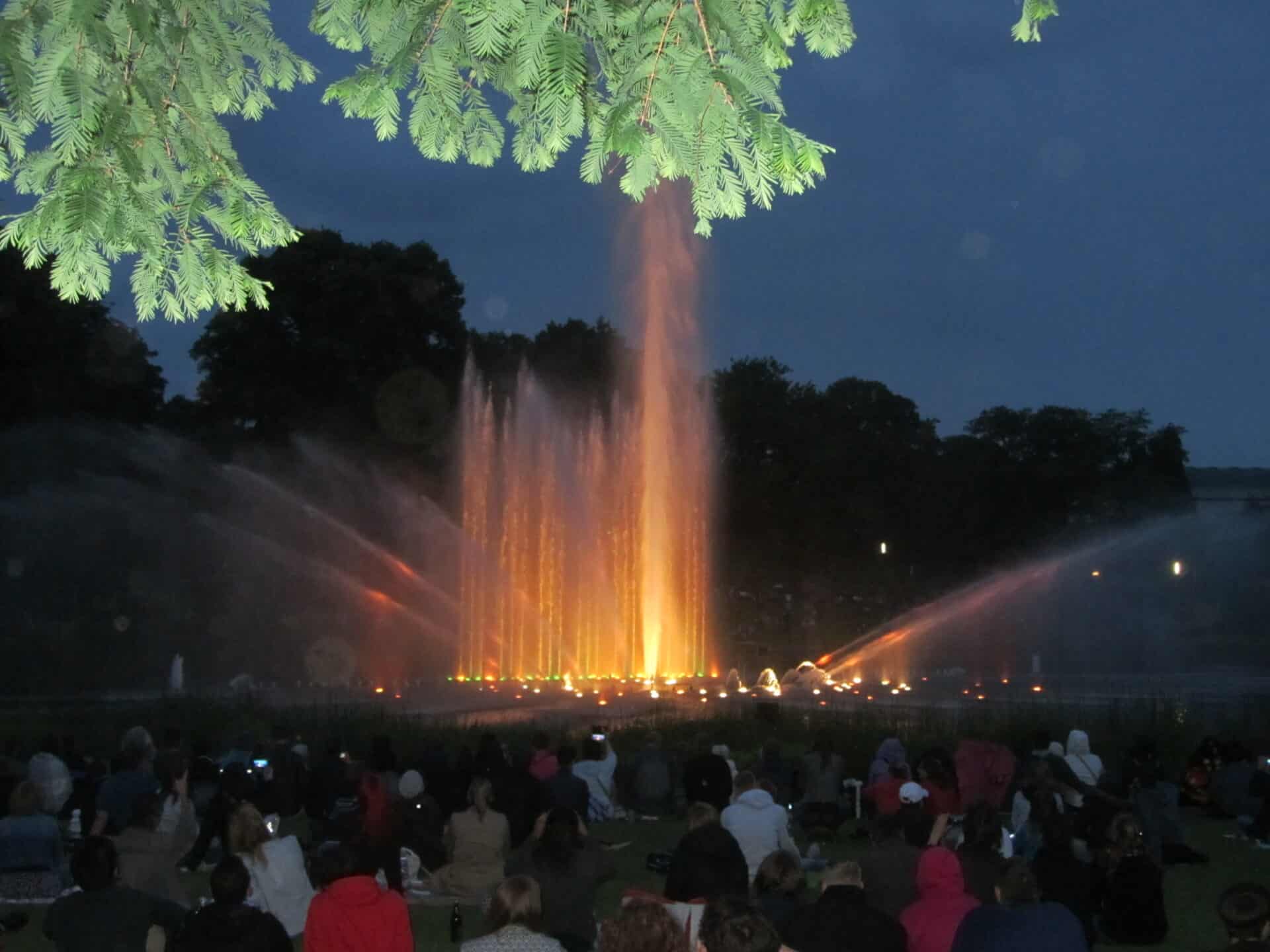 One of the most visited attractions in Hamburg
One of the most spectacular open-air activities are the water light concerts at the Parksee (between TV tower / Rentzelstraße and Dammtorbahnhof). On beautiful summer days come here in the evening hours from 22 clock up to 5000 spectators, some of whom sit on self-brought blankets and folding chairs. They listen to the music for half an hour, but mainly enjoy the synchronized dancing water fountains and the colors projected onto them. In the afternoon there are also performances, but without artificial light and color effects. Admission is free of charge. In times like these, please be sure to contact the tourist information beforehand ! In principle, there are performances from May to September – no matter what the weather is.

Harmony of music, water and light
You might assume that at the beginning of the performance someone presses a button and then everything runs computer-programmed. But this is not so. In a “bunker” on the edge of the park’s lake, both the water fountains and the lighting effects are controlled by staff according to a score written specifically for the purpose. The “water organ” has 95 keys for 99 nozzles, from which the water shoots out in 15 fountain groups. A maximum height of 36 meters. The “light piano” works with 566 LED spotlights as well as 6 colors and their mixed colors. The music comes from the tape, mainly film music or classical music, often pieces that are known.

From the luminous fountain to the water light concerts
Here was the zoological garden until 1930, yes, a second animal park next to that of Hagenbeck. Today’s park lake was called Großer Teich and had a “luminous fountain” in the middle of it even before 1930. In 1938 and 1953 the water fountains were extended. The facility, which today produces the water light concerts, has existed since 1973 and was extensively renovated in 2019. 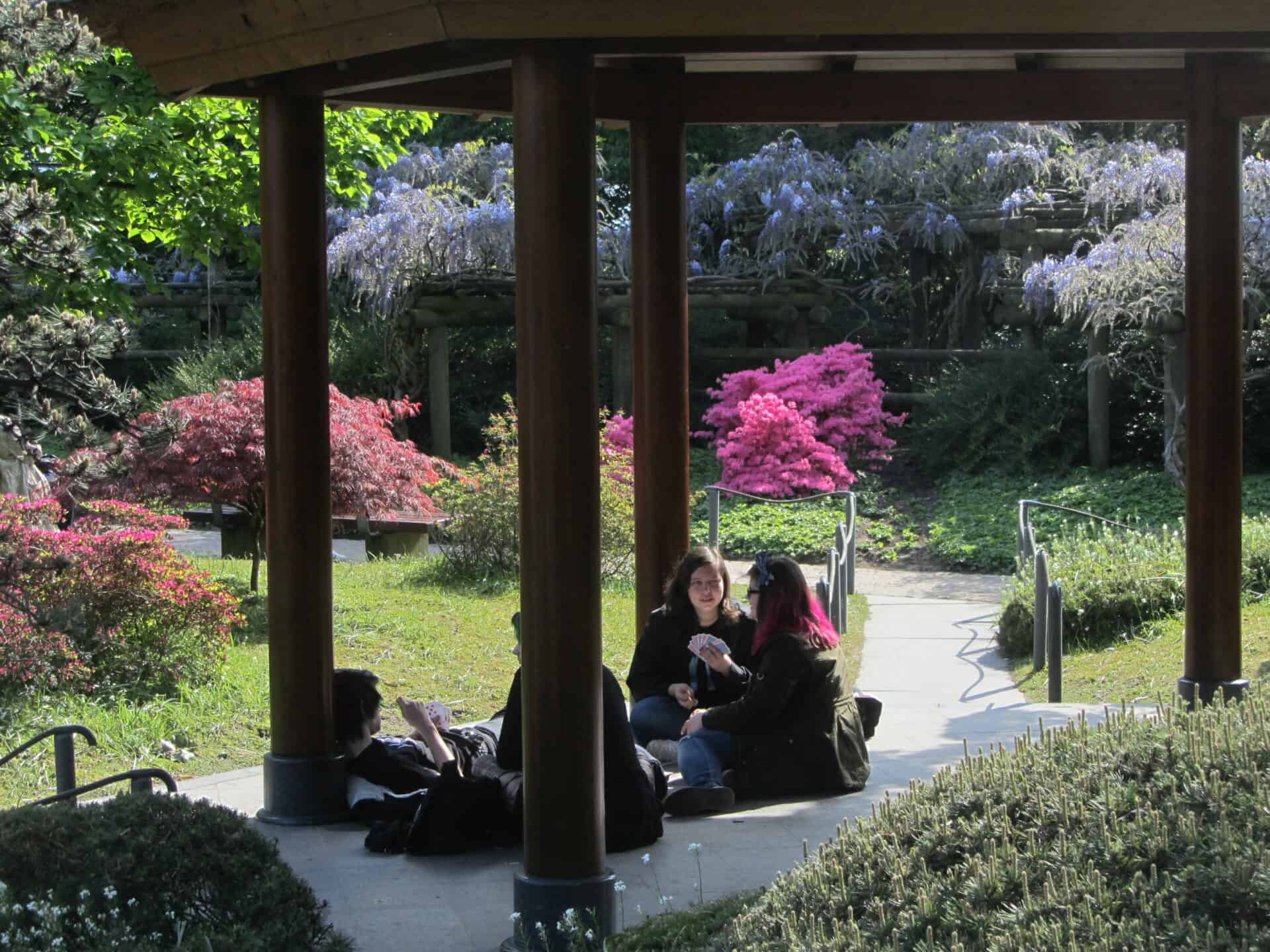 Japanese garden
Far Eastern garden atmosphere you can sniff in the Japanese garden. It is the largest of its kind in Europe. According to plans by Japanese garden architect Yoshikuni Araki, it was given to the people of Hamburg and their visitors in 1990 and has since been one of the biggest attractions in Planten un Blomen. The garden is located between the Congress Center and the Hamburg Fair.
Like other Japanese gardens, this one is a replica of real landscapes – only in miniature. The best example are the bonsai pines, which are brought into the desired reduced form by constant pruning. Natural stones are also an essential part of Japanese garden culture, as are streams and small ponds. At such a pond stands in Planten un Blomen the tea house, which offers tea ceremonies in the warmer season.
Beyond the covered walkway to the fair is the Japanese Landscape Garden, which was designed somewhat earlier by the same architect.

Rosengarten
Another highlight is the rose garden very close to the CCH. He was only there, where today the so-called citizen gardens at the entrance Rentzelstraße are. The new rose garden was completely redesigned in the classical style with metal rose arches and blue rose balls and inaugurated in 1993. About 300 varieties of roses can be marveled at there.

Apothecary garden
Also this theme garden is located near the entrance Rentzelstraße under the TV tower. Behind white walls hide “Seven courtyards of health”. A wrought-iron gate to pass through gives us access to a variety of medicinal plants. Information boards, also in Braille, explain the therapeutic references to the layman.
Incidentally, between the apothecary garden and the rose garden is the music pavilion, which offers a partly inspiring program, especially on weekends. All free of charge ! 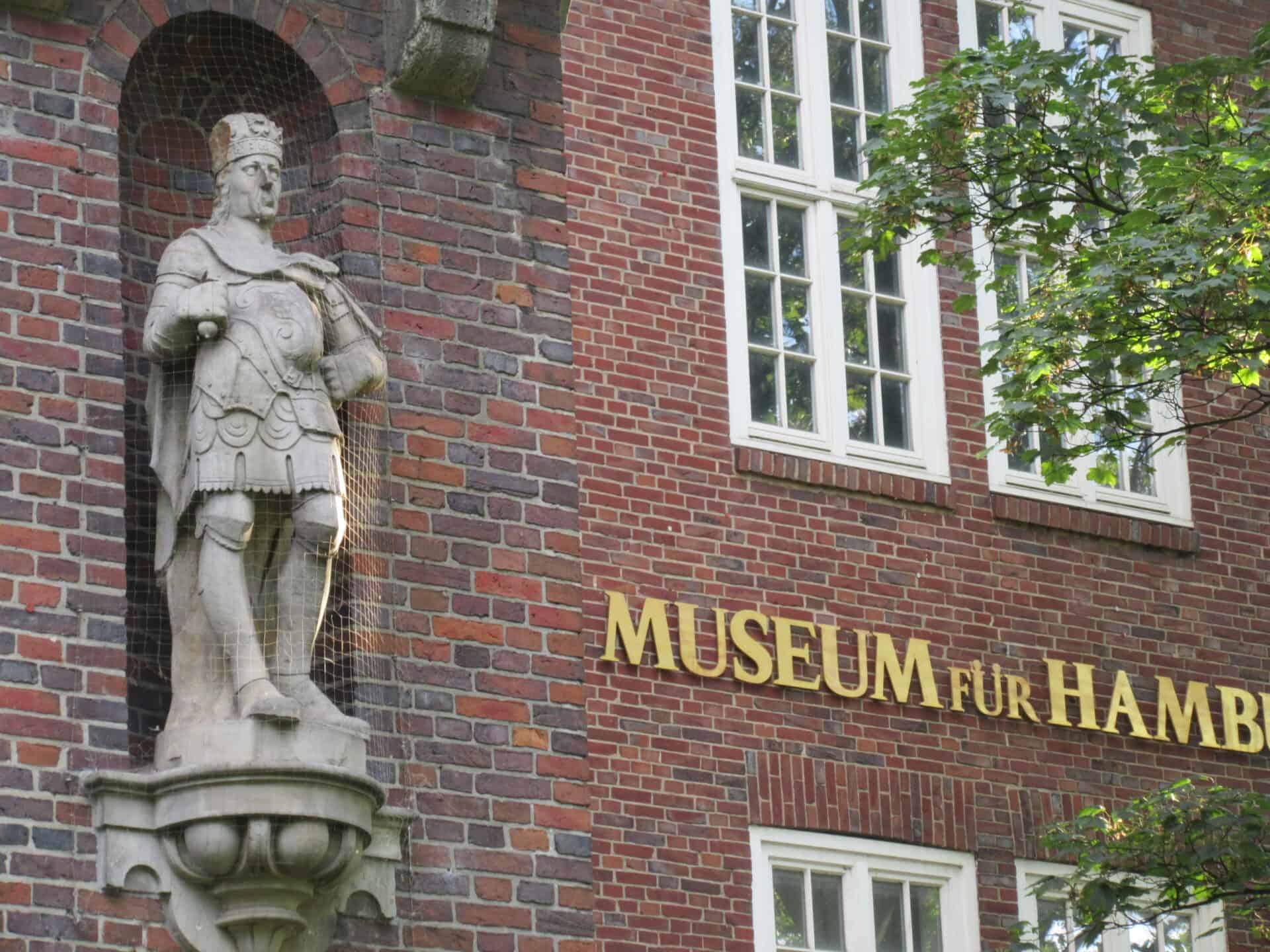 Bastion – Observatory – Museum
The museum is located exactly on a bastion of the former city fortifications of the 17th century. At its feet stretches today the southern part of Planten und Blomen, the Great ramparts. The red brick building looks baroque, but the building was erected only at the beginning of the 20th century. Since 1825 an observatory had stood exactly at this place, which was shifted 1912 because of increasing air and light pollution to Bergedorf.

Imperial statues
It is very worthwhile to walk through this museum, but today we look at it only from the outside. And there, on the north side of the facade, 14 large statues stand out, in niches. They come from the extension of the medieval town hall at the Trostbrücke and were made between 1620 and 1649. In 1842, when the Great Fire raged for five days in the city center, attempts were made to stop it by blowing up the City Hall to create a breach that the fire would not overcome. This did not succeed, and only some documents and building components were saved, including the statues of the emperor. The architect of the Museum of Hamburg History, Fritz Schumacher, worked to ensure that these sculptures were inserted into the facade of this building.

Other architectural fragments
The Museum of Hamburg History has included other remains of destroyed buildings in its exterior, such as the portal of Cranz’s House, which was built in 1617 and demolished in 1890. It stood in the Große Reichenstraße in the old town.
In the 19th century, there was a music store Cranz here, which gave the name to the house.