In the place where the foundation of Hamburg’s wealth was laid, the Elbphilharmonie stands as Hamburg’s new landmark: in the centre of the port.

According to Hamburg music lovers, the world’s most extraordinary concert hall can be seen from afar as you sail up the Elbe River but also from many points in the city center.

When the building opened at the beginning of 2017 – with considerable delay and cost increases – the worldwide media echo remained for a week at the level of New York in terms of its importance and perception. Even today, you have to book well in advance for an official Elbphilharmonie tour. But every HafenCity guided tour with the Hamburg Greeters also leads to the Elbphilharmonie, of course.

On the Plaza of the Elbphilharmonie

After arriving at Hamburger Bahnhof, we met up with our Greeter Andreas. First on the agenda was a visit to the platform of the Elbphilharmonie. The view of the city and harbour was indescribable....

HafenCity and the Elbphilharmonie from the perspective of a Hamburg resident

4 years ago, our Greeter Klaus showed us Hamburg from his point of view. We liked it so much that we wanted to do a greet with him again this year. This time his wife Sabine was with us. They gave...

Actually, the visit to a cinema performance in the Elphi was supposed to be our highlight on this day, but it turned out differently. We met Frank at the HH main station. From there we went in 2.5... 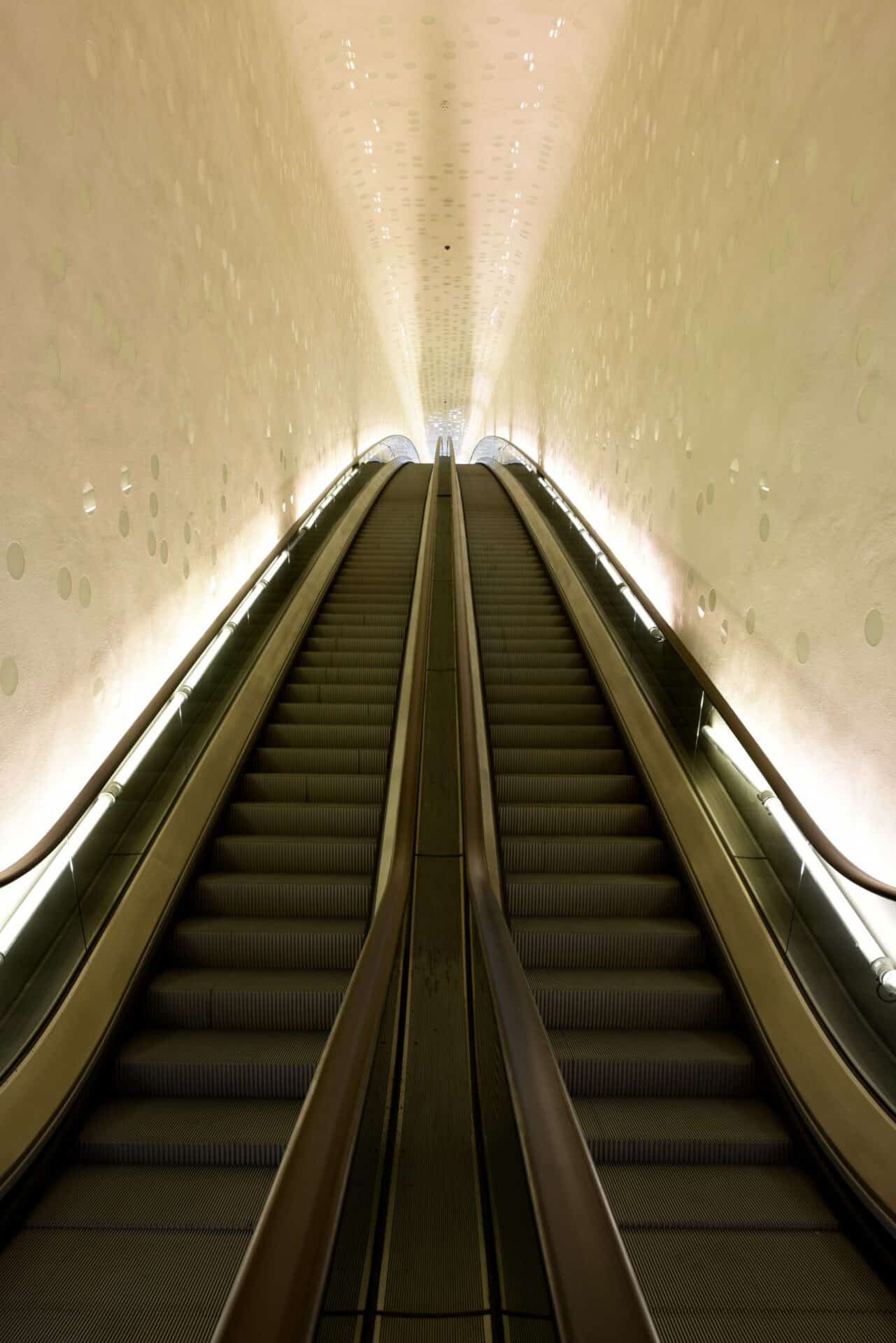 Lieber with the “Tube”
Of course, there are also elevators that bring you to the plaza of the Elbphilharmonie. But more beautiful is the ride on the escalator, which is called quite anglophile “Tube”.

The ride: almost as long as a Beatles song
With two and a half minutes of travel time, it takes almost as long as a short Beatles song until the 82-meter escalator brings you to the plaza. According to the manufacturer, the two-lane, convex-curved escalator is “the longest escalator in Western Europe and the only one in the world that describes an arc.”
For some Hamburg residents, the first ride was nevertheless a disappointment, because the press said before the opening that the ride takes almost six minutes; then it would have been enough for a Queen song as well…

Building peculiarities
Behind the thousandfold glass sequins on the walls, by the way, no illuminants hide, the glass panes reflect only the existing lighting. By the way, they are also the dominant design element of the ElPhi merchandising.
The curvature of the escalator probably has to do with statics and with the fact that more space can be used under the escalator as a result. Also other explanation pushes itself: by the curvature one does not see from below, how far it goes altogether…

Reward at the end
The ride ends at a height of 26 meters, 11 meters below the actual plaza.
Only shortly before the end of the ride you can see that you are driving towards a huge panoramic window. The view is exciting: down the Elbe, towards Landungsbrücken, the “Dancing Towers” and the container terminals.
If the window is well cleaned, you hardly recognize it at first and approach the edge only cautiously…
A short escalator later you get up to the actual plaza. 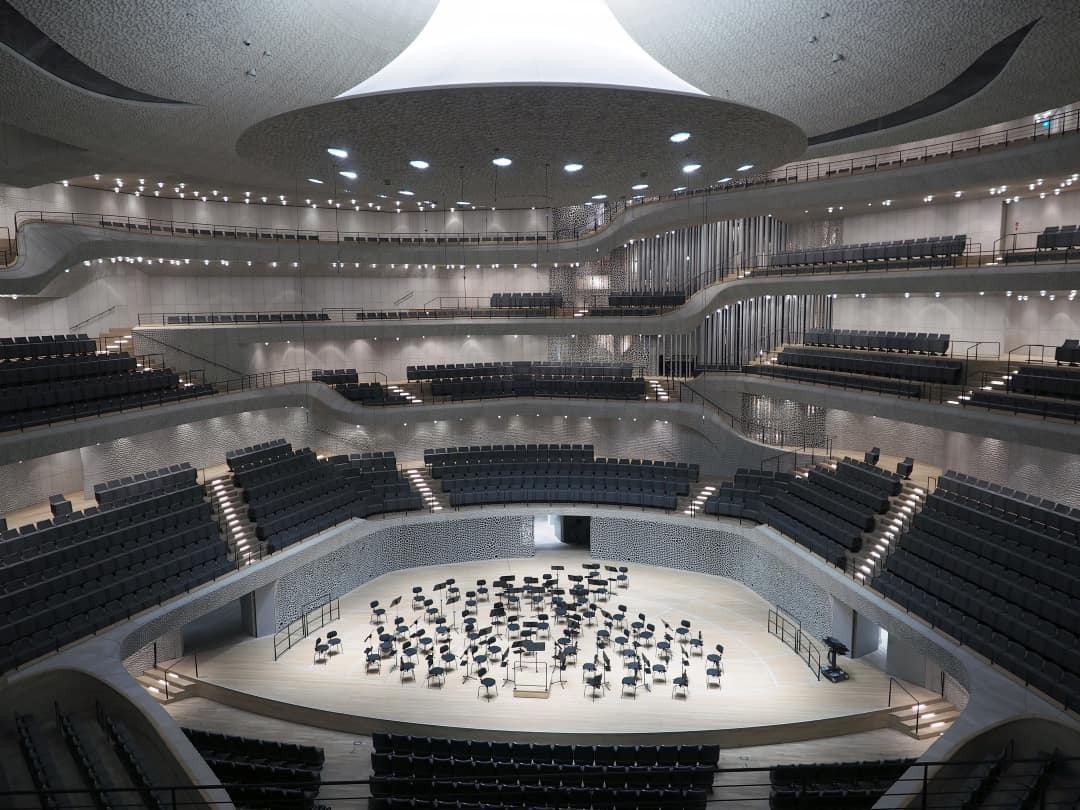 A Vineyard at the Harbour

The design highlight in the Elbphilharmonie is the Great Hall with its 2150 seats. It is built according to the Weinberg principle, with the audience tiers on all sides of the central podium. As in its model, the Berlin Philharmonie, the orchestra is thus located in the middle of the hall.

The good view from all sides

Compared to the traditional “shoebox” model, in which the stage is located on one side of a rectangular room, the Weinberg architecture offers the advantage that spectators in all seats have a good view of the conductor and orchestra.

However, this advantage comes at the price of a greater challenge in terms of acoustics: on the one hand, the reflection of sound from the multi-faceted façade is more difficult to control, and disturbing echoes are also harder to avoid. Only a true master of acoustics could help.

With the experience of 60 concert halls scattered around the globe, Japanese Yasuhisa Toyota seemed to be exactly the right person to turn the Elbphilharmonie into a world-class concert hall. His motto: “If you manage as an acoustician to make the audience no longer perceive the great distance to the music, you have done a good job.”

A first important measure already took place in the shell: the concert hall rests on 360 steel springs, so that all outside noise is absorbed.

Toyota met the challenge with the help of “white skin”: the walls are covered with thousands of white gypsum fiberboards. The surface of each panel is adapted to its respective place with angles and indentations. The optimal distribution of sound is also supported by a huge reflector under the ceiling. 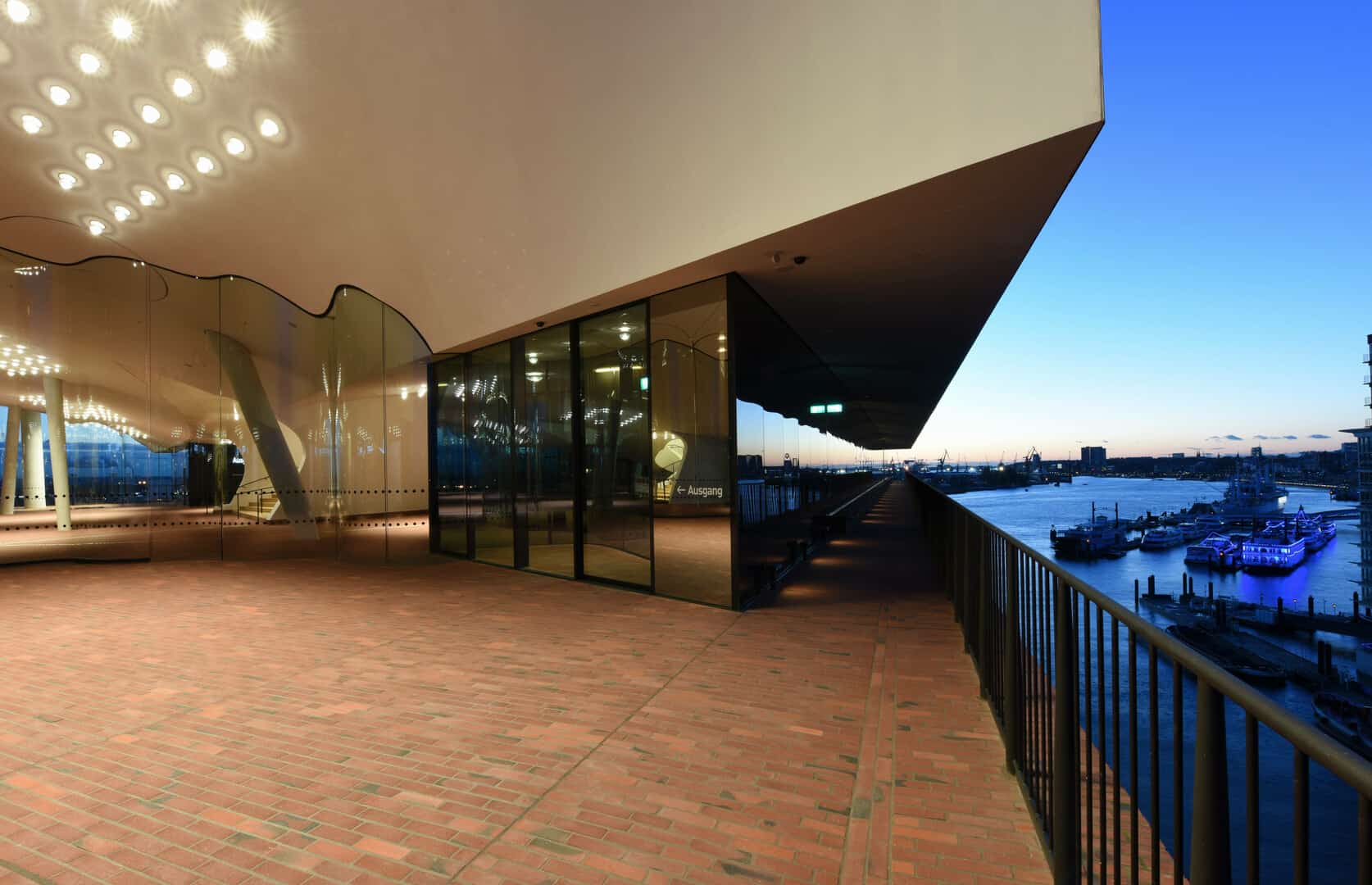 On both sides of the plaza – facing the water and the city center – eight-meter-high passageways open up to the outdoor plaza. It allows a complete tour around the Elbphilharmonie.

In front of both passages, the architects have stretched a kind of glass curtain. As a result, the interior plaza is not so draughty even when it is cold and windy. The successful wave design “curtains” alludes – just like the roof of the Elbphilharmonie – to the maritime context. Windless summer days offer the chance for the curtains to be opened.

Plaza tickets
Access to the plaza is free. To avoid overcrowding, access requires a ticket that allows entry during a specific time period at a time.

The free tickets are available directly in the entrance area of the Plaza (in summer there might be short waiting times) or across the street in the ticket store “Am Kaiserkai 62”.
Those who want to avoid waiting times or would like to enter the Plaza at a specified time, can also book the tickets in advance on the Internet at a price of € 2 each. 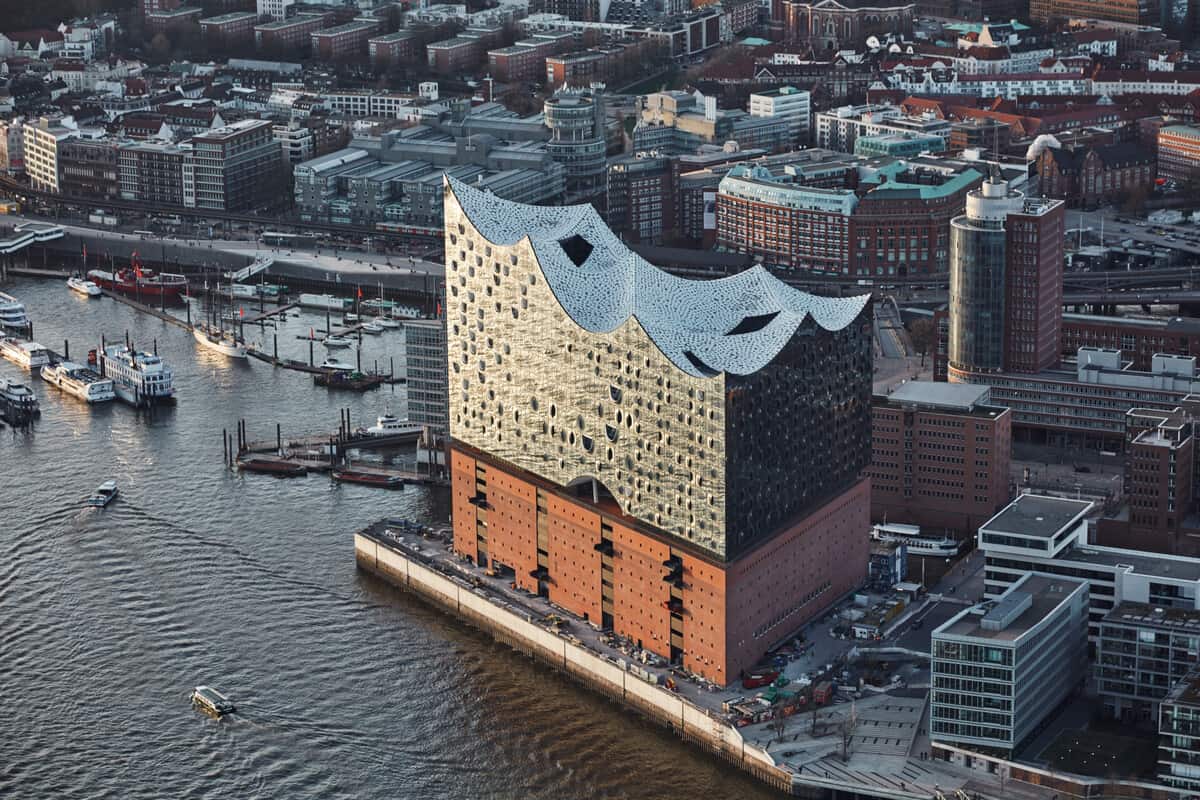 Weigh building
If the Elbphilharmonie with its 200,000 tons in a scale would lie, it would need to the balance either 722 A-380 airplanes or two and a half cruise ships of the type “Queen Mary II”.

The large concert hall alone weighs 12,500 tons: it rests 50 meters above the ground on 362 steel springs in two concrete shells. Even the toot of the largest ships thus no longer reaches the concert hall.

The steel used weighs even more: at 18,000 tons, more than twice as much steel was used as in the Eiffel Tower in Paris.

Surfaces and spaces
The Elbphilharmonie’s glass facade consists of 1,100 individually shaped glass elements and covers an area of about 16,000 square meters, the equivalent of more than two soccer fields.

More than 10,000 tiles were made for the wall cladding in the Great Hall. They form the “white skin” that ensures an optimal sound experience at every seat.

By the way, the Great Hall comprises 40,000 cubic meters.

82 meters long…
…is the escalator up to the Plaza in 37 meters height.

520 parking spaces…
…has the Elbphilharmonie parking garage, which is located in the belly of the old Kaispeicher A.

4765 organ pipes…
has the organ in the Great Hall. Their length varies between eleven millimeters and ten meters.