Around the City Hall Hamburg

The city hall of the Hanseatic city is one of its landmarks. This is where the city is governed, the mayor receives his visitors and also greeters like to meet their guests in front of the city hall entrance to start a tour of the city center from here.
The Rathausmarkt is the scene of many events and is located at the intersection of the Old and New Town. Together with the Chamber of Commerce building, this area forms the political and economic heart of the city.

From Town Hall Market through the city centre

It was a lot of fun and extremely interesting. Our greeter Karsten took a lot of trouble, prepared the tour very well and made the whole thing extremely entertaining - it was never boring. Even at...

In the Center of Hamburg 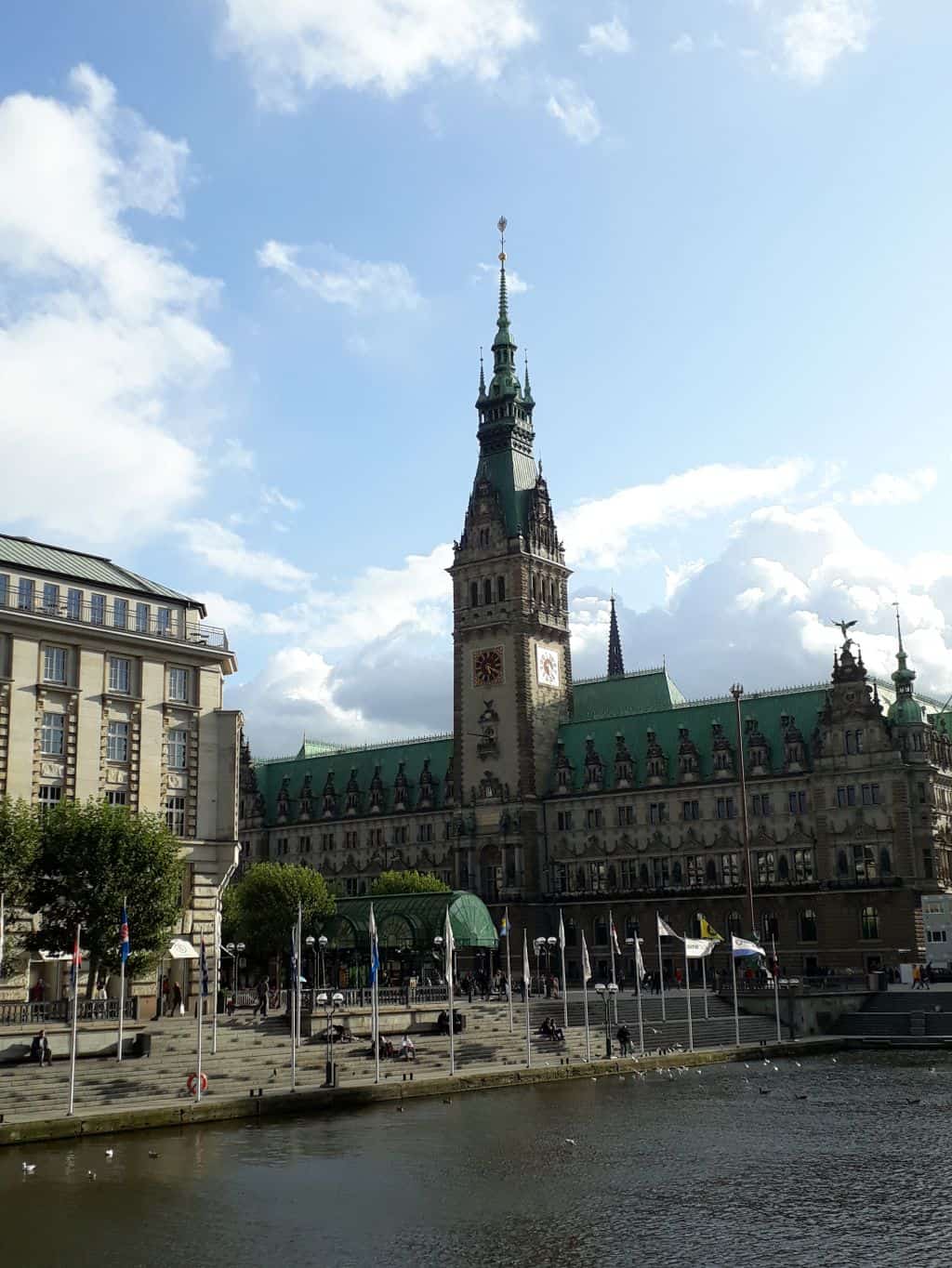 The town hall and its facade

After the old town hall was destroyed in the great city fire of 1842, it took almost 50 years for Hamburg’s government to be adequately housed again. The new city hall, completed in 1897, was and is impressive even from the outside. 112 meters wide and 111 meters high, it represents the self-confidence of the Hanseatic city then and now.

With the choice of the location one shifted the city center toward the Alster and built on marshy ground under use of 4000 oak piles the city hall directly at the 1841 established building of the Hamburg stock exchange. More densely politics and economics could not be together.

The City Hall still houses the legislative and executive branches of the city. The Bürgerschaft, Hamburg’s parliament, is located in the left wing of the building, while the Senate, or government, is on the right.

Facade full of symbols
To see all the details of the symbolic facade, it is worth using binoculars or a telephoto lens. The most striking are the twenty bronze statues of emperors standing between the windows of the representation floor. In the center are Charlemagne and Frederick Barbarossa – both of whom have played important roles in Hamburg’s urban history.

Above the windows are coats of arms of Hanseatic cities. Directly above are 28 busts depicting professions. Some are clearly identifiable by their tools. Others represent specific people, on the far left, for example, Mayor Mönckeberg as president of the Bürgerschaftspräsident.

In the center of the facade, a bird can be seen above the flagpole. It represents the phoenix, as a symbol of the resurrection of the city after the all-destroying fire of 1842.

The courtyard facade in particular recalls the early history of Hamburg. Attached far above, one finds figures of bishops and Schauenburg counts from the Middle Ages. 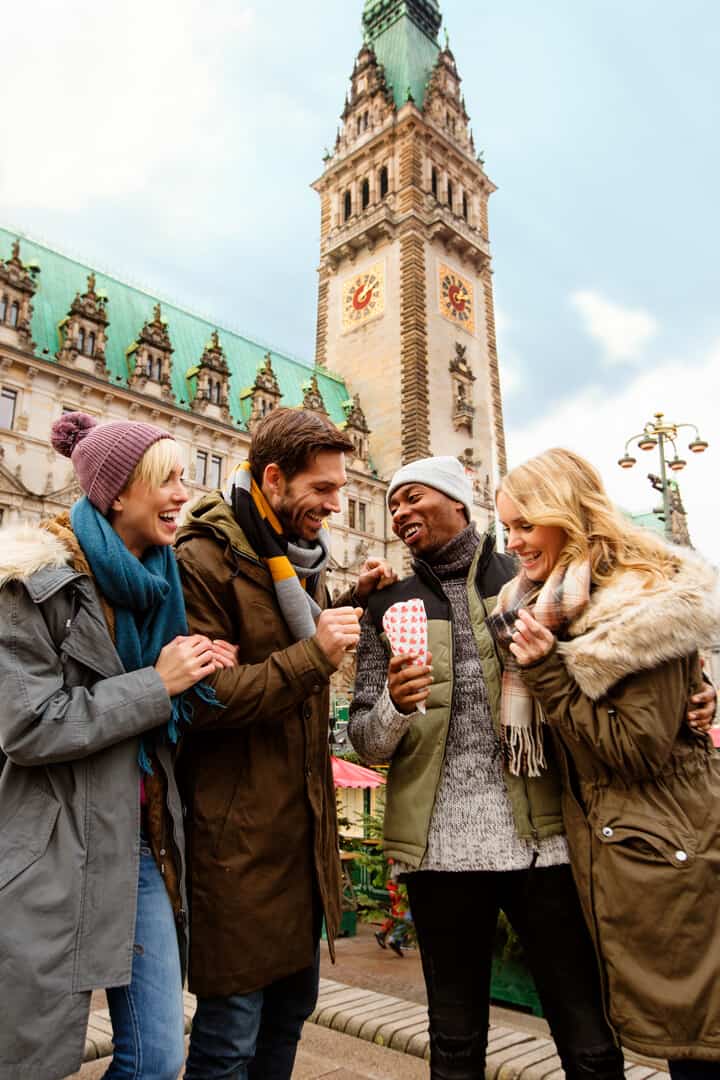 The Rathausdiele is almost always freely accessible and at the same time the starting point of the guided tours of the city hall, with which visitors can visit the representative floor. If one enters the hallway, one sees on the left the two-part staircase of the Bürgerschaftsflügel, on the right the more pompous Senatstreppe, at the upper end of which the First Mayor traditionally receives his guests.

The columns show reliefs of deserving Hamburgers, and one also those of Hamburg women. A look in the showcases at the entrance side is worthwhile if you want to learn more about the Hamburg Parliament and Senate.

The representation floor
In the second floor one gets only in the context of a guidance. It is worth it, because hardly anyone would expect such magnificent rooms in a bourgeois city hall, as they can be seen here. The halls are full of allegorical representations representing democracy but also seafaring, decorated with busts of important personalities, furnished with heavy furniture and the walls covered with the finest wallpaper or leather.

A look into the Ratsstube (the name of the meeting room of the Hamburg government) gives an impression of the wealth and self-confidence of the city at the time of the construction of the town hall. Where the first mayor and the second mayoress sit, one recognizes by the larger chairs.

In the Golden Book of the city, the guests of honor sign in. In reality, by the way, it is not a book, but a loose-leaf collection. The highlight of the tour of the floor is entering the Great Banquet Hall. With a length of 46 meters and an area of 720 square meters, it is the largest room in the city hall. It is used for large receptions and banquets, such as the Matthiae meal, which has been held since 1356 and is the oldest banquet in the world still celebrated, to which 400 guests are invited.

After the tour, it is worthwhile to leave the town hall towards the inner courtyard. Here you can see the rear facade of the Chamber of Commerce with many city coats of arms of other trading cities and the Hygieia Fountain, which commemorates the cholera epidemic in 1892 and the importance of clean drinking water.

For those who don’t have the opportunity to take a tour of the city hall, the city invites you to take a virtual tour. 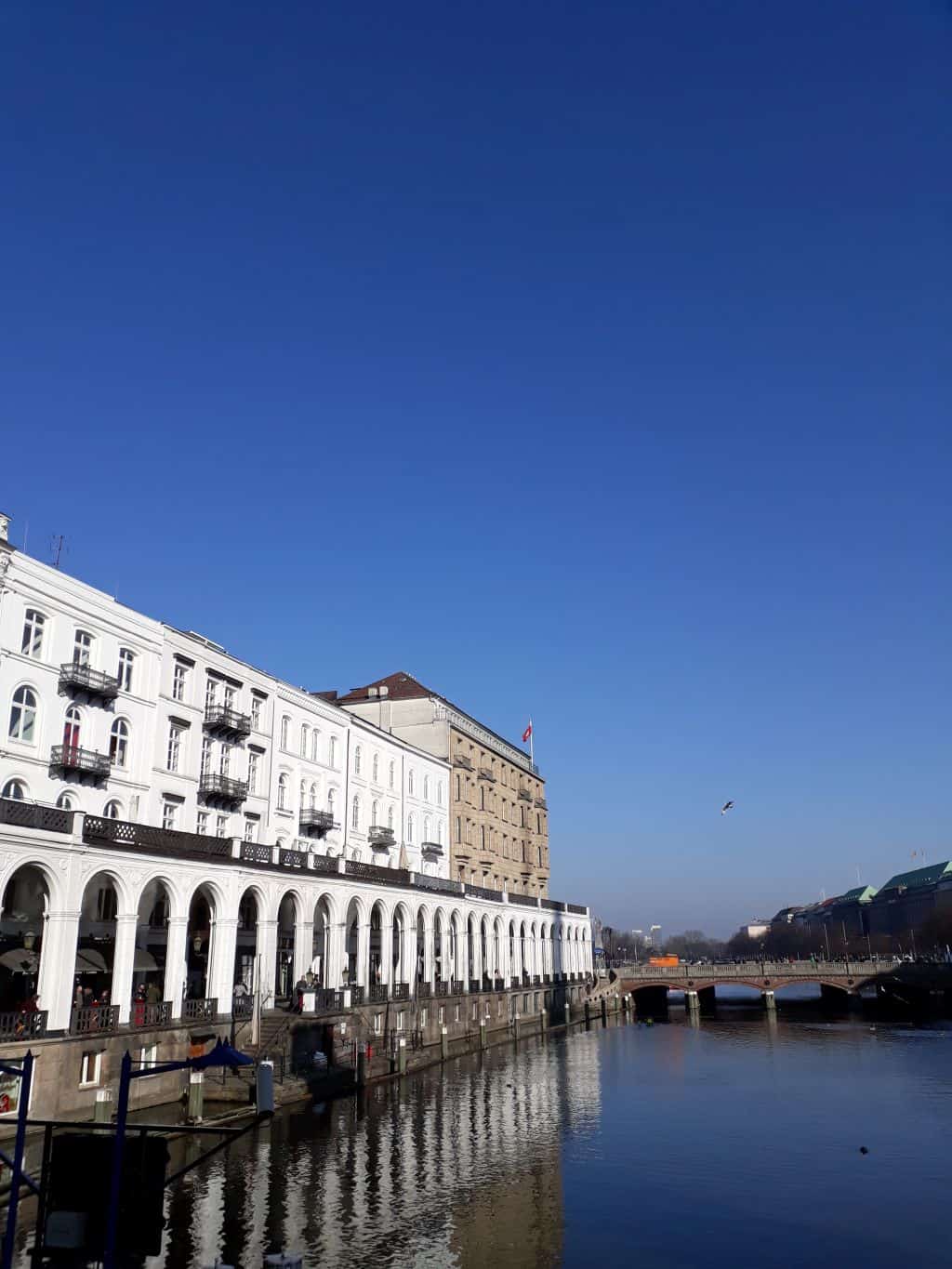 Around the city hall

When a fire destroyed large parts of the city in May 1842, plans for reconstruction were quickly on the table. The opportunity was taken to modernize the city from the ground up. The medieval streets and watercourses were widened and straightened, a network of sewage pipes was laid, and the half-timbered houses, some of which were medieval, were replaced by new, larger buildings, some of which can still be admired today.

Aftermarket architecture
Italy was fashionable, then as now, and so echoes of Italian architectural style prevailed. If you’ve ever been to Bologna, you’ll remember it from the town hall arcades. They were built in 1842 and still house the first and smallest shopping arcade in Hamburg. Worth seeing here are the ceiling paintings rediscovered after a fire, an advertisement from the late 19th century.

If you look from the Rathausmarkt to the west, the building of the Old Post Office stands out, also built after the fire. Here gathered the branches of the various postal services to facilitate the citizens to post letters and other items. The high tower was for a time the terminus of a line of sight telegraph to the mouth of the Elbe.

To the right of the town hall is the Alte Wall. The entire street, from Rathausmarkt to Adolphsbrücke, has recently been redesigned and now houses offices, stores and the Bucerius Art Forum with changing exhibitions.

If you stand in front of City Hall and look to the other side, you can see the beginning of Mönckebergstraße, one of the city’s main shopping streets. It is still quite young and was built only at the beginning of the 20th century as a connection to the newly opened central station. 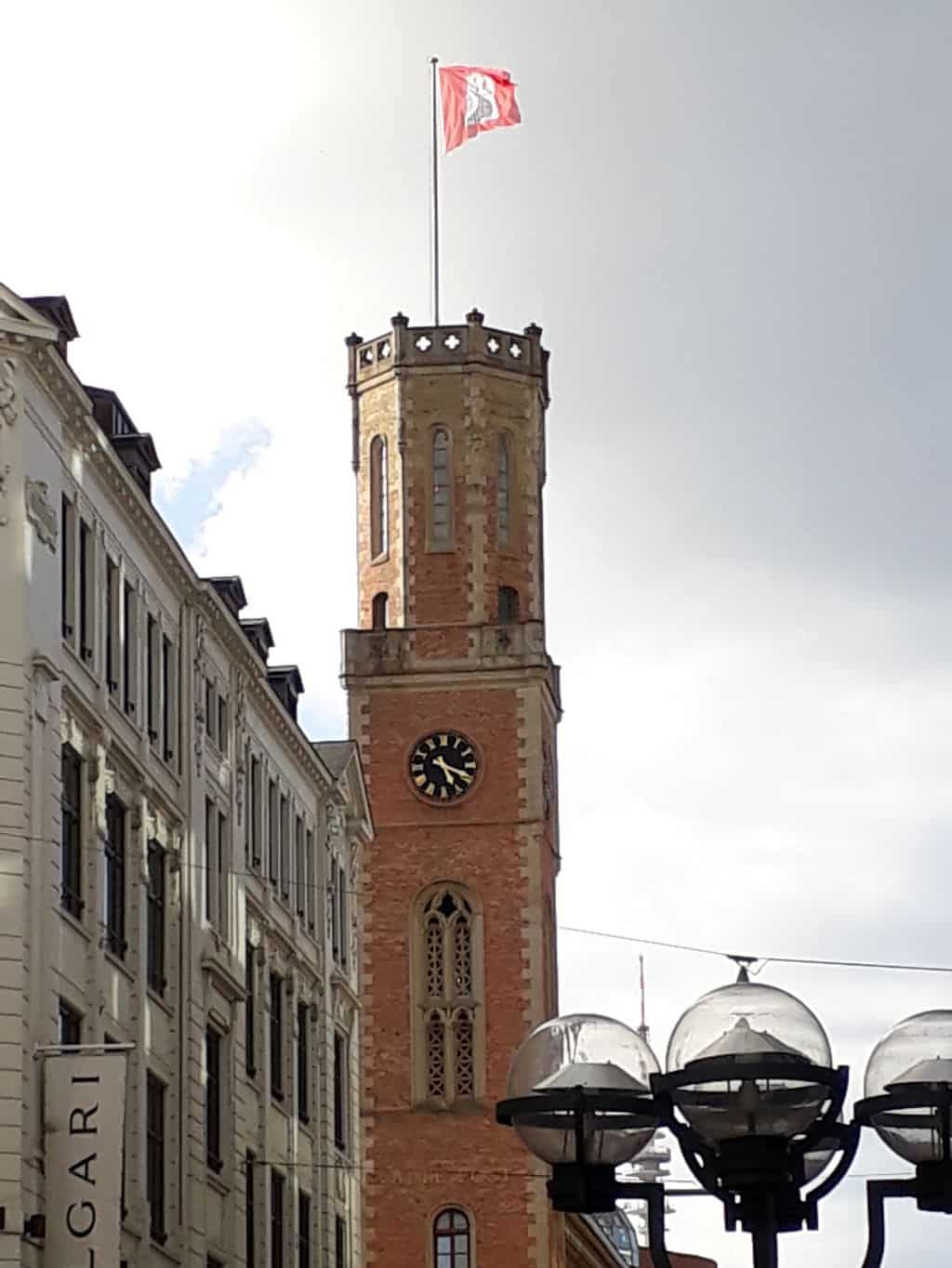 Chamber of Commerce and Adolphsplatz

Once you go around the town hall, you stand in front of the Chamber of Commerce building. It is older than the town hall, was built in 1841 and was fortunately spared from the great city fire of 1842 due to the enormous efforts of Hamburg merchants. The stock exchange halls, on whose floor securities have long since ceased to be traded, now serve as event halls. However, bound to tradition, insurance and real estate brokers still meet in these rooms for the stock exchange.

The use of the building corresponds to the diverse tasks of the Chamber of Commerce. The Commerzbibliothek, with its valuable stock of books, is particularly open to students, while the WelcomeCenter is aimed at new citizens from abroad. Of interest to visitors are the large models of the convoy ships that protected Hamburg merchants’ ships from pirates in the 17th century and the equally old sea buoy found off Blankenese.

By the way, there is also a small museum on the history of the stock exchange. It is located in the “house in the house”, a new structure moved into the old architecture, which alone is worth more than a look. Towards the town hall side, a restaurant invites you to linger, in summer also with seats in the inner courtyard of the town hall.

The square where the Chamber of Commerce building stands is called Adolphsplatz and is named after Count Adolph IV of Schauenburg, who founded a monastery on this site in 1235. Remains from this period are still found today whenever archaeologists have the opportunity to dig. They provide information about the eventful history of the Hanseatic city and also about the change in the terrain due to the damming of the Alster.