Discover Hamburg by bike. On quiet side routes quite relaxed through the city, through the harbor or into the countryside. In addition, cycling in Hamburg is particularly easy because most of the paths are relatively flat. With your own wheels, the StadtRAD or rental bikes, you can ride through the city, along the Elbe or around the Alster through Hamburg’s neighborhoods. Bike tours to the Alte Land, Wilhelmsburg or the Vier- und Marschlanden are also particularly beautiful.

From city centre to Teufelsbrück

On 6 June, we were lucky enough to spend some fantastic, wonderful hours with our Greeter Romuald in Hamburg. Already the first contact by phone showed that the chemistry was right and we were...

Around the Alster by bike

We had a great greeting with Peter. We were already in contact beforehand and he took all our wishes into account. Even a last-minute change of plans was no problem for him. He got us great e-bikes...

To Wilhelmsburg by bicycle

My girlfriend and I had the privilege to be greeted by Doris in Hamburg. She was so nice and showed us around Hamburg by bicycle. We first saw some of the urban culture around St. Pauli and...

Across Hamburg in the transport mix 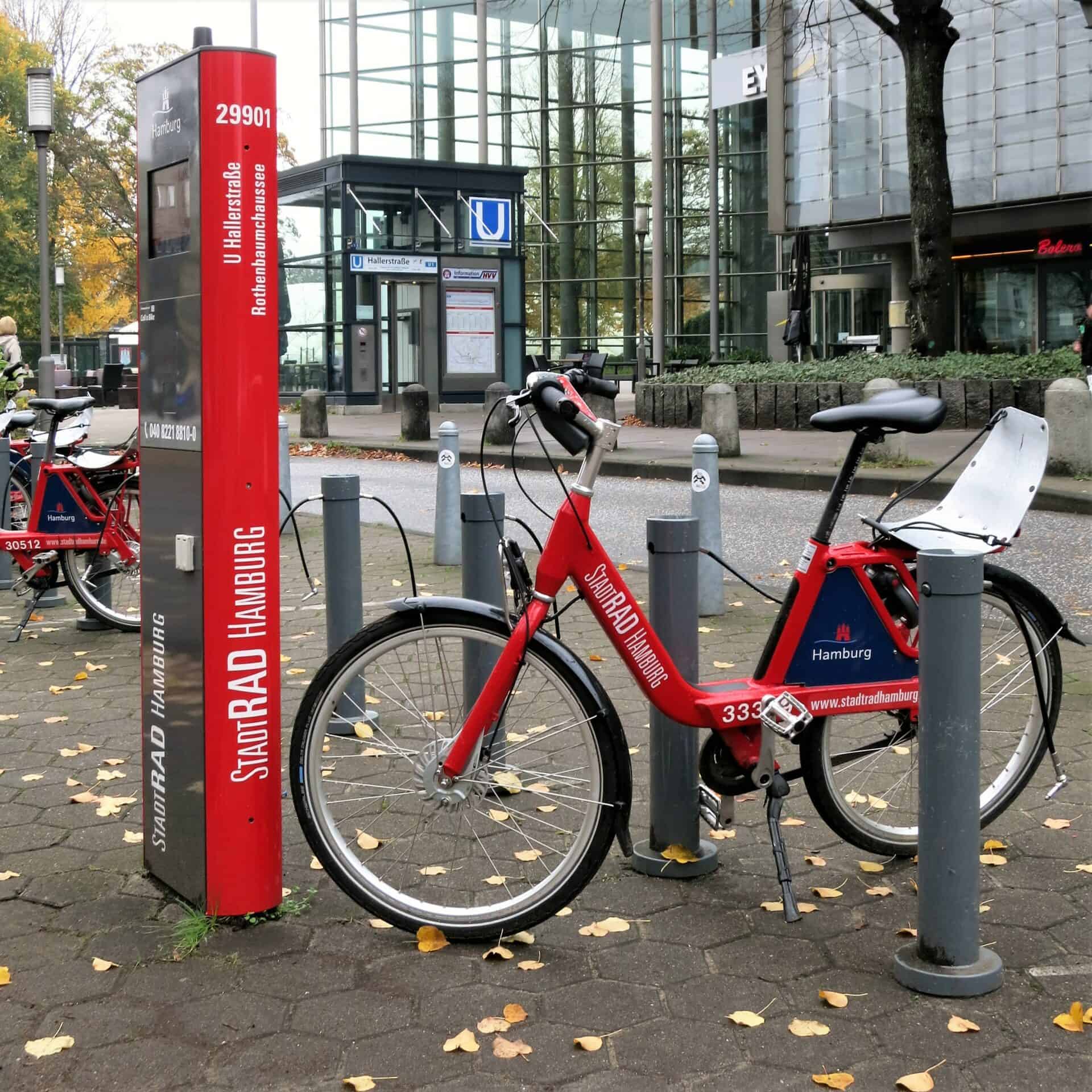 Rent a bike in Hamburg

The easiest way to ride a bike in Hamburg is the StadtRAD. That’s what Hamburg is going for. There are over 3,000 rental bikes at more than 250 stations spread throughout the city. The saddle can be adjusted in height.

Download the app once and register online. In the app you can see where the next station is and how many free wheels are available there. You can borrow up to 2 wheels at the same time on a registration. You pay a one-time fee of 5 € per year, which is charged as an initial credit in the first year. You can return the bikes at any other station. You have 30 free minutes for each ride. Beyond that, each additional minute costs €0.10, but max. the daily flat rate of €15 for 24 hours.

With the StadtRAD you have the possibility to move around differently on your tour. The stations of the red wheels are often located directly at the U-/S-Bahn stations, so you can easily change.

Of course, many hotels also offer their guests their own bikes.

For those who want to rent a more comfortable bike, perhaps an e-bike or a racing bike, you can find the right bike at one of the bike rental shops, of which there are many in the city center. 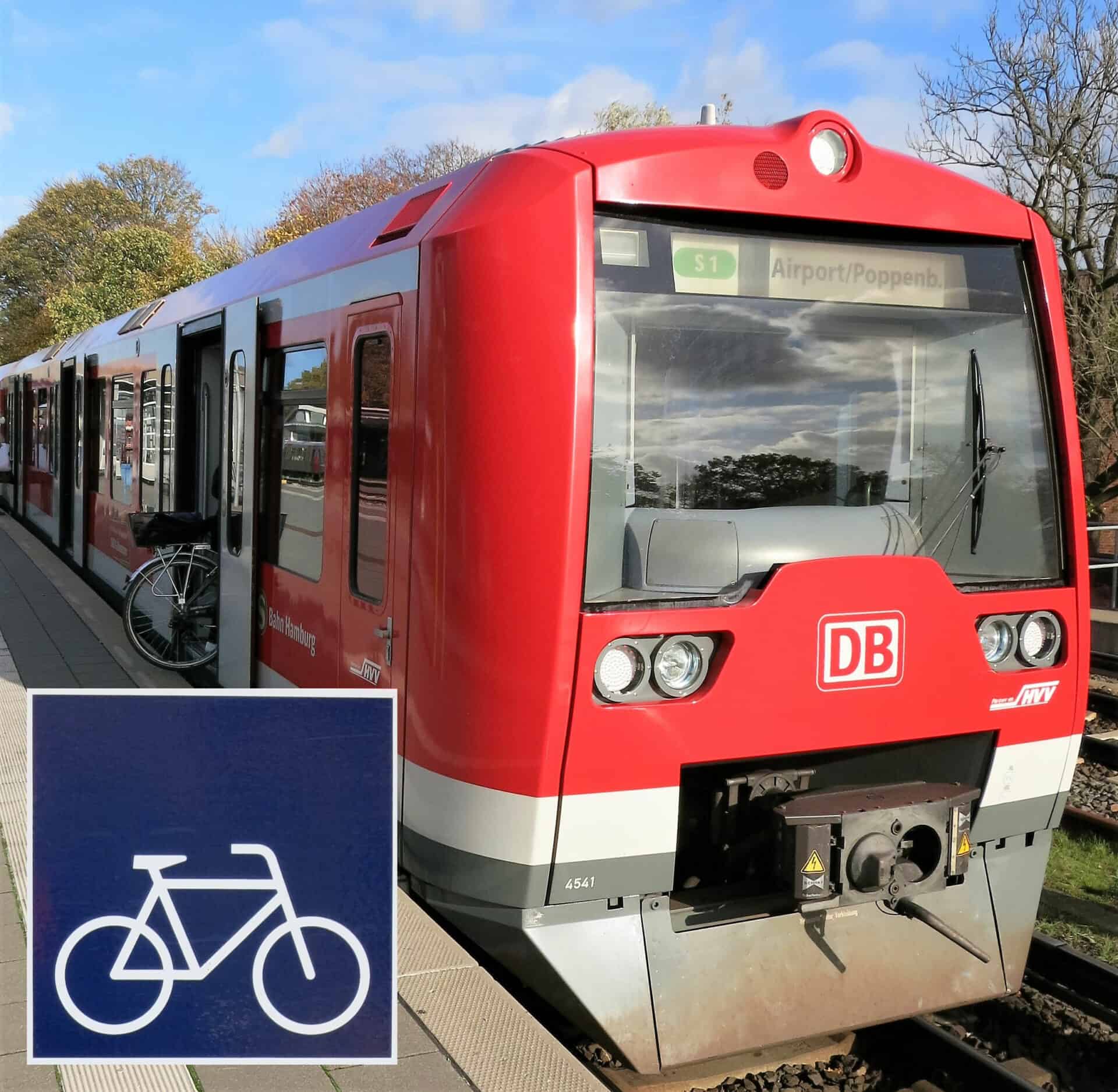 You can take your bike with you free of charge on the U-, S-, A-Bahn. And that is in the time Monday to Friday before 6 o’clock, from 9-16 o’clock and from 18 o’clock, on weekends, on holidays and during the Hamburg summer vacations all day.

You can also take your bike on the Elbe ferries. So a bike tour can be combined well with a trip across the Elbe. On the harbor ferries, the entrainment is possible on all days without restriction. On the ferry Blankenese-Cranz the Niederelbe-Tarif is valid. On this line, you can take your bike all day, but a fee is charged for this.

A trip to the Alte Land or Wedel to the ship welcoming facility Willkomm-Höft can also be supplemented with a trip across the Elbe. With the Lühe-Schulau ferry you can cross the Elbe in 25 minutes for 7.50 € per person, including bicycle. For a round trip you pay 14 €. The tickets are available approx. 10 min. before departure from the boarding staff. Up to 70 bicycles can take the ferry on board. There are 250 seats in total, up on the panorama deck with the best view of the Elbe and in the weather-protected salon below. 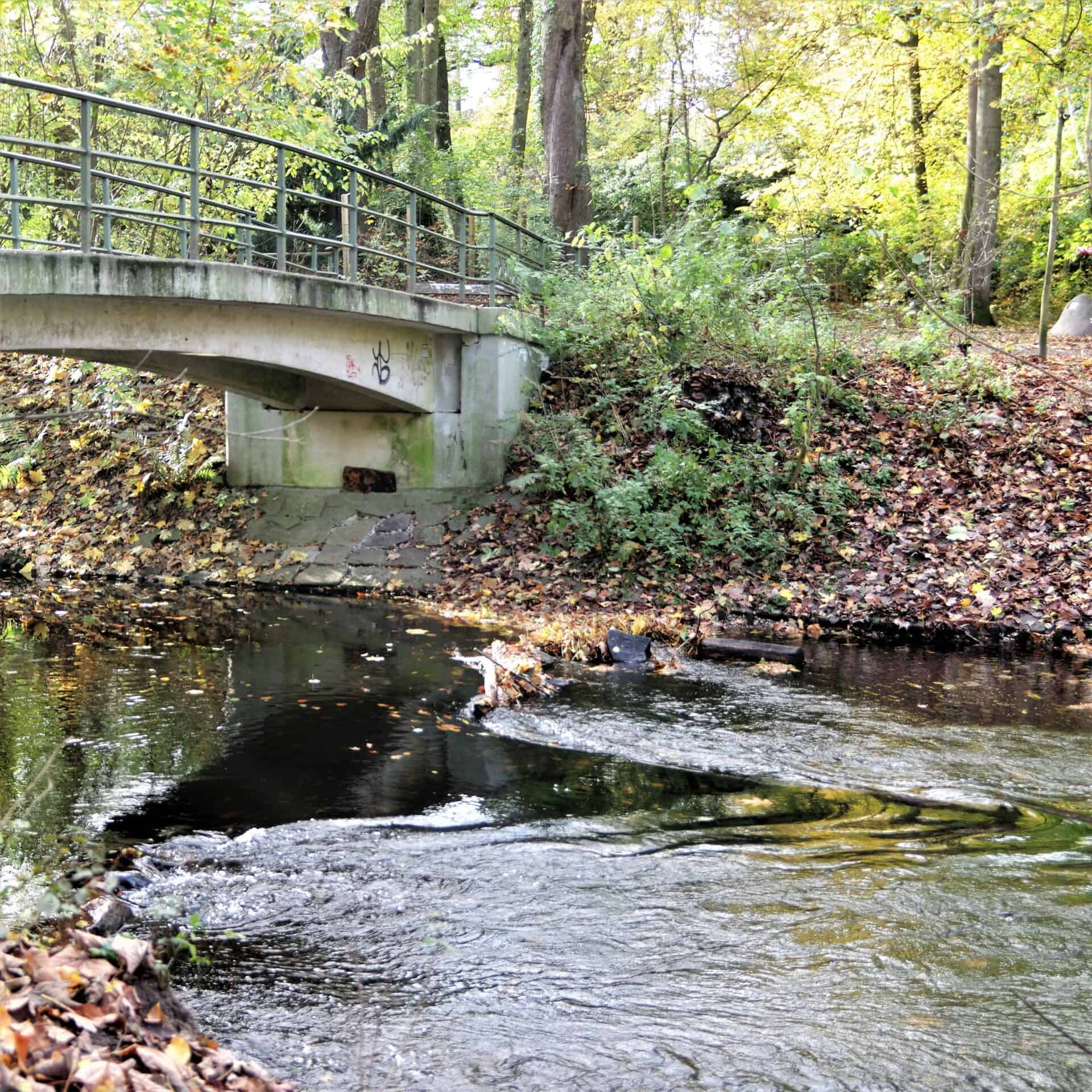 If the tour starts in the city center, it first leads upstream and the length of the tour can be adjusted to your own wishes.

First possible turning point is the Krugkoppelbrücke at the northern end of the Außenalster. This leisurely short tour offers the opportunity to also explore the surrounding districts of Harvestehude, Uhlenhorst and St. George with. Good cycle paths lead around the Außenalster.

Another turning point is the Winterhuder Fährhaus. The Leinpfad, which has been developed as a bicycle route, leads past beautiful old villas to Eppendorf. On Tuesday and Friday from 08:30 to 14:00 you can also visit the Isemarkt there

Further it goes along the Alsterlauf to Ohlsdorf. Here it offers itself to drive also a round by the cemetery Ohlsdorf. Ohlsdorf Cemetery in Hamburg’s Ohlsdorf district was inaugurated on July 1, 1877, and at 389 hectares is the world’s largest park cemetery

Then it goes either back again or further on the Alsterwanderweg, along the wild, not canalized upper reaches of the Alster to the Poppenbüttler Schleuse.

You can also get back to the city easily by subway U1 or S-Bahn S1. Bicycles can be taken along free of charge.

The Elbe hiking trail leads from the Landungsbrücken to the western city limits and to Wedel to the ship welcoming facility Willkomm-Höft. The route runs past the old Elbe tunnel, via the fish market to the fishing port and to Övelgönne. After a short piece of pushing, over the most beautiful of all paths, past the little houses that line up here, it goes shortly after the famous beach pearl back on the saddle. Now it goes quite relaxed past the Old Sweden to Teufelsbrück. The Elbe and the big ships always in the view the journey goes to Blankenese and at the Falkensteiner bank along to Wedel.

Many cafes and garden pubs invite you to drink a coffee somewhere along the way or to watch the ship traffic on the Elbe while drinking Alsterwasser.

The southern bank of the Elbe can also be included in the tour. For this purpose, the HADAG port ferries in the Hamburg transport network are suitable. With the appropriate HVV ticket for subway/S-Bahn and bus, the port ferries can also be used and bicycles can be taken along free of charge. Between Blankenese and Cranz operates depending on the water levels of the Elbe a ferry that also takes bicycles.

From Wedel, the S-Bahn S1 also takes you back to the city. 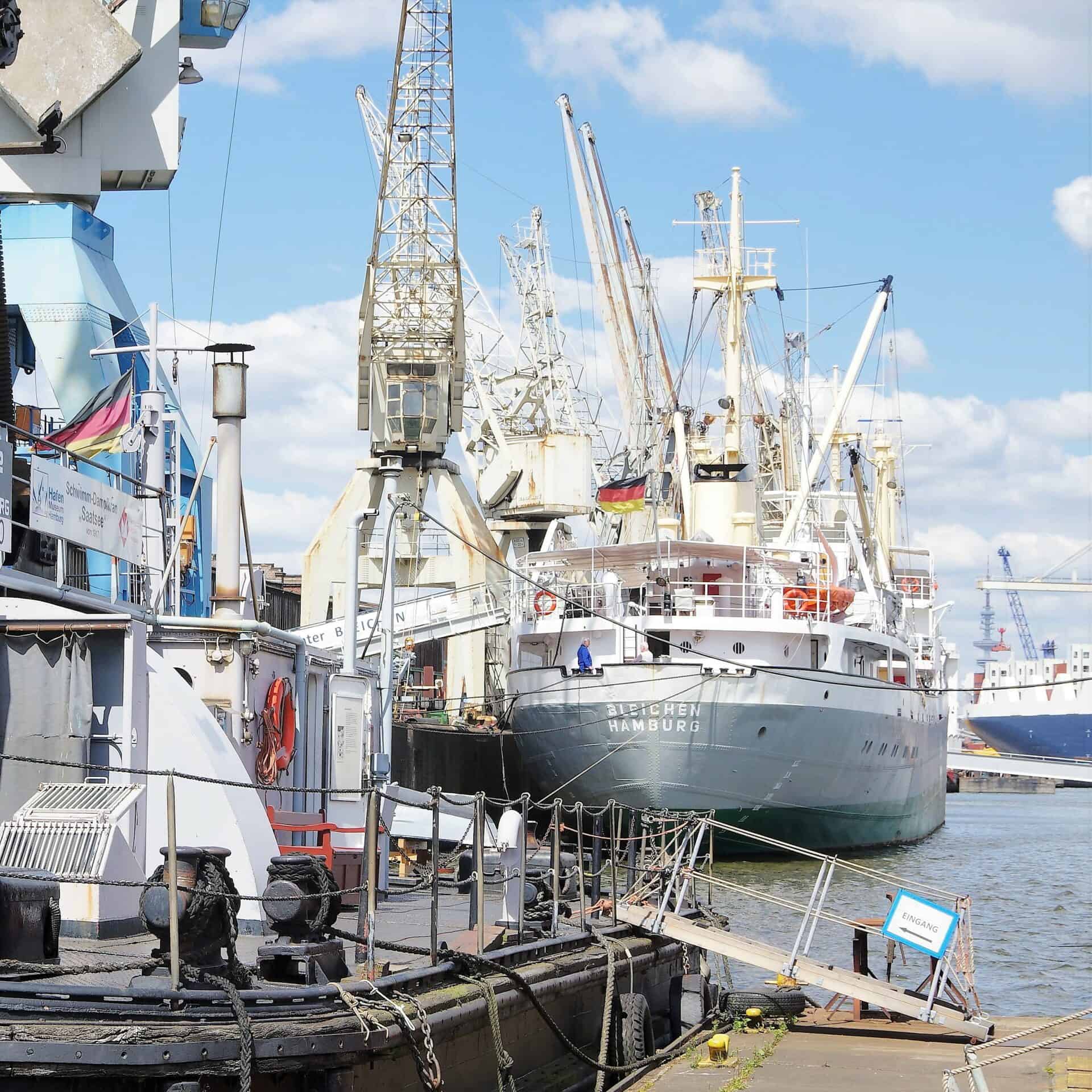 A trip through the port of Hamburg takes you over the Elbe bridges and through the old Elbe tunnel.

The Elbe bridges consist of several parallel rail and road bridges that cross the Elbe in Hamburg. They connect Hamburg’s city center with the Elbe islands of Veddel and Wilhelmsburg.

We refer to the old Elbe tunnels as the St. Pauli Elbe tunnel, opened in 1911, as a distinction from the new freeway Elbe tunnel further west, which has existed since 1975. The old Elbe Tunnel passes under the North Elbe River over a length of 426.5 meters and connects the St. Pauli Landing Bridges (north entrance) with the Elbe island of Steinwerder (south entrance). It is used as a public traffic route by pedestrians and cyclists free of charge.

In Hamburg-Veddel is the Ballinstadt, an emigration museum inaugurated in 2007, built on the site of the former emigrant halls. In 1901, the general director of Hapag, Albert Ballin, had mass accommodations built on the Elbe island of Veddel for thousands of emigrants who arrived in the city from all over Europe every week.

At the Hansa harbor lies the harbor museum. If you want to experience the history and development of the port of Hamburg up close, this is the place for you. Since 2020, the port museum has also been the berth of the four-masted ship “Peking,” which was built in Hamburg in 1911.

The tour can be extended by a detour to Wilhelmsburg or also to Harburg. 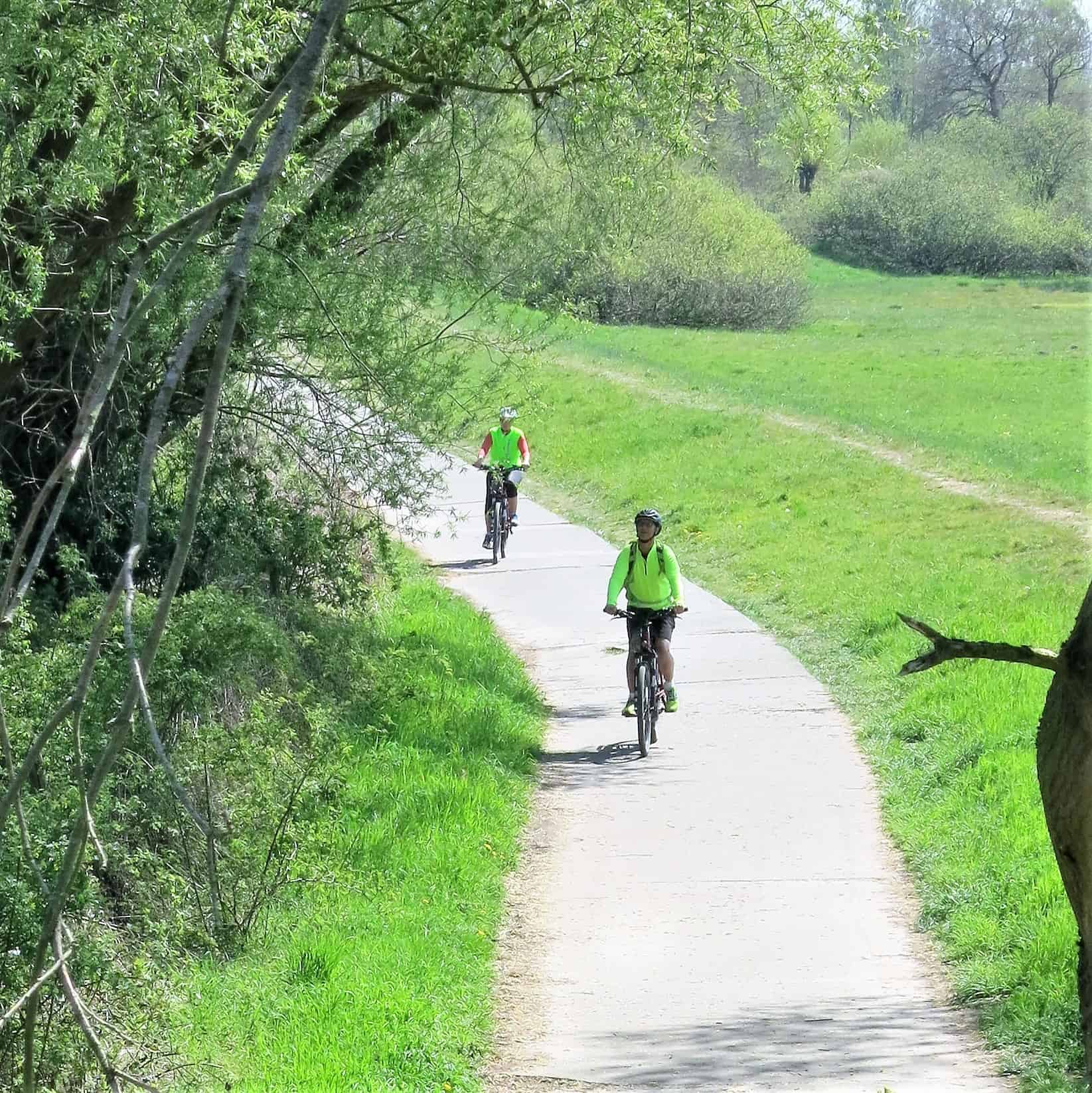 From Harburg to Bergedorf

A ride into the countryside is a bike tour from Harburg to Bergedorf.

After a short ride through Harburg, the tour leads along the Seevekanal to Seevetal. It is an idyllic natural paradise with many waterfowl and other wildlife (herons, pheasants, hares…) and of course the biggest highlight – the checkerboard flower meadows. Usually around the end of April to the beginning of May, the checkerboard flower, which is highly endangered in Germany, shows itself. The Seevesperrwerk is located at the mouth of the Seeve into the Elbe.

Very well recognizable on the way to Bergedorf is still the former Gleisdreieck, the connection between the Vierländer Bahn and the Hamburg or Kirchwerder Marschbahn. Turning onto the old railroad line of the Marschbahn, it also alternatively goes back to Hamburg.