Along the northern bank of the Elbe River, the Elbe riverbank hiking trail, which is about 20 kilometers long, runs between the “Fish Market of St. Pauli” and the “Willkomm Höft” in Wedel, Holstein. Far away from the traffic, but with the big ships always in view, the people of Hamburg enjoy the beautiful weather here at any time of the year during a walk along the water. Then you get the feeling that all of Hamburg is out here together with friends and dog. Along the way are numerous cafes, restaurants and beach bars, as well as many sights and cultural highlights.

The Elbe – ebb and flow in eternal change

The greet was very informative about the districts of Altona and Innenstadt from the perspective of the Elbwege along the river. Günther knew how to inform very precisely about flood protection, the...

Hamburg's beautiful side away from tourism! Blankenese and the banks of the Elbe with wonderful nature, but also interesting cultural assets. Insider tips were interesting and delicious.... Image...

On foot down the Elbe 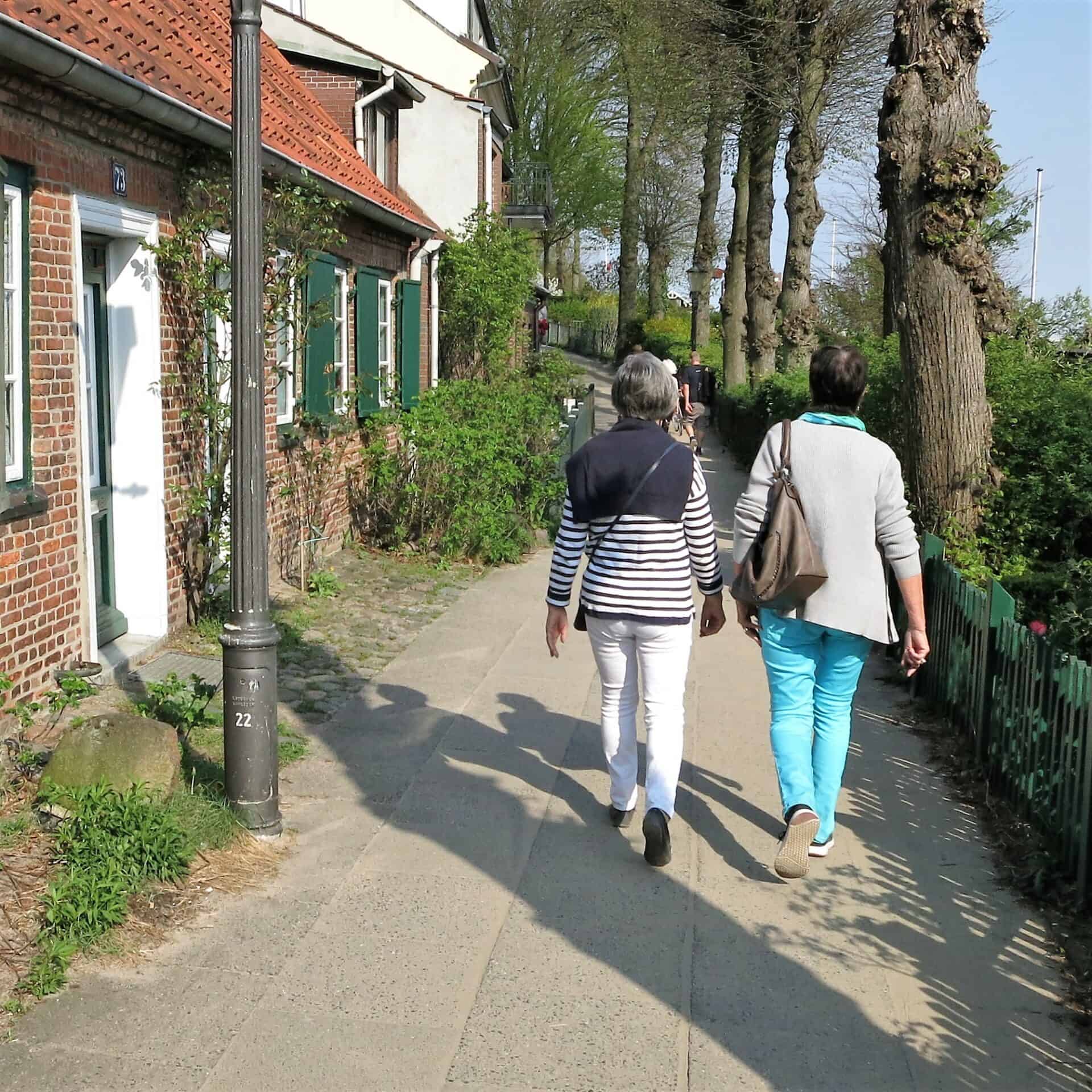 Where do they run?

If you want to run the whole Elbuferwanderweg with its length of 20 kilometers from the “Fish Market of St. Pauli” to the “Willkomm Höft”, you should plan some time. However, the route can also be explored in shorter parts.
The stations Altona/Fischmarkt and Neumühlen/Övelgönne are easy to reach with the HVV port ferries of line 62 or bus lines 111 and 113. To Övelgönne you come also well with the S-Bahn / station Altona and then walk in the direction of the Elbe, past the Altona town hall over the Altona balcony.
To Teufelsbrück you go with the S-Bahn to the station Klein Flottbek and walk through the Jenischpark to the Elbe (about 1500 m) or you take the HVV port ferries line 62 and 64 (change in Finkenwerder). The Jenischpark with a size of 24 hectares was once created in the 18th century by Caspar Voght. In 1927, the private park was leased by the city of Altona, acquired in 1939 and thus opened to the public. The Botanical Garden, which is not far away, is also worth a walk.
Blankenese you can reach by S-Bahn. On foot or with the bus line 488 (the so-called mountain goat) it then goes from the station through the Treppenviertel to the Elbstrand. Tours with a focus on the staircase district lead past Wilhelminian-style houses, the church at the market, through parks, down and up stairs.
To Wedel you come with the S-Bahn. On foot you go about 1500 m through the Bahnhofsstraße to Schulau to the Elbe. Schulau is a district of the city of Wedel in the district of Pinneberg in Schleswig-Holstein. Here at the Schulauer Fährhaus, the “Willkomm Höft”, ends or begins the Elbuferwanderweg. 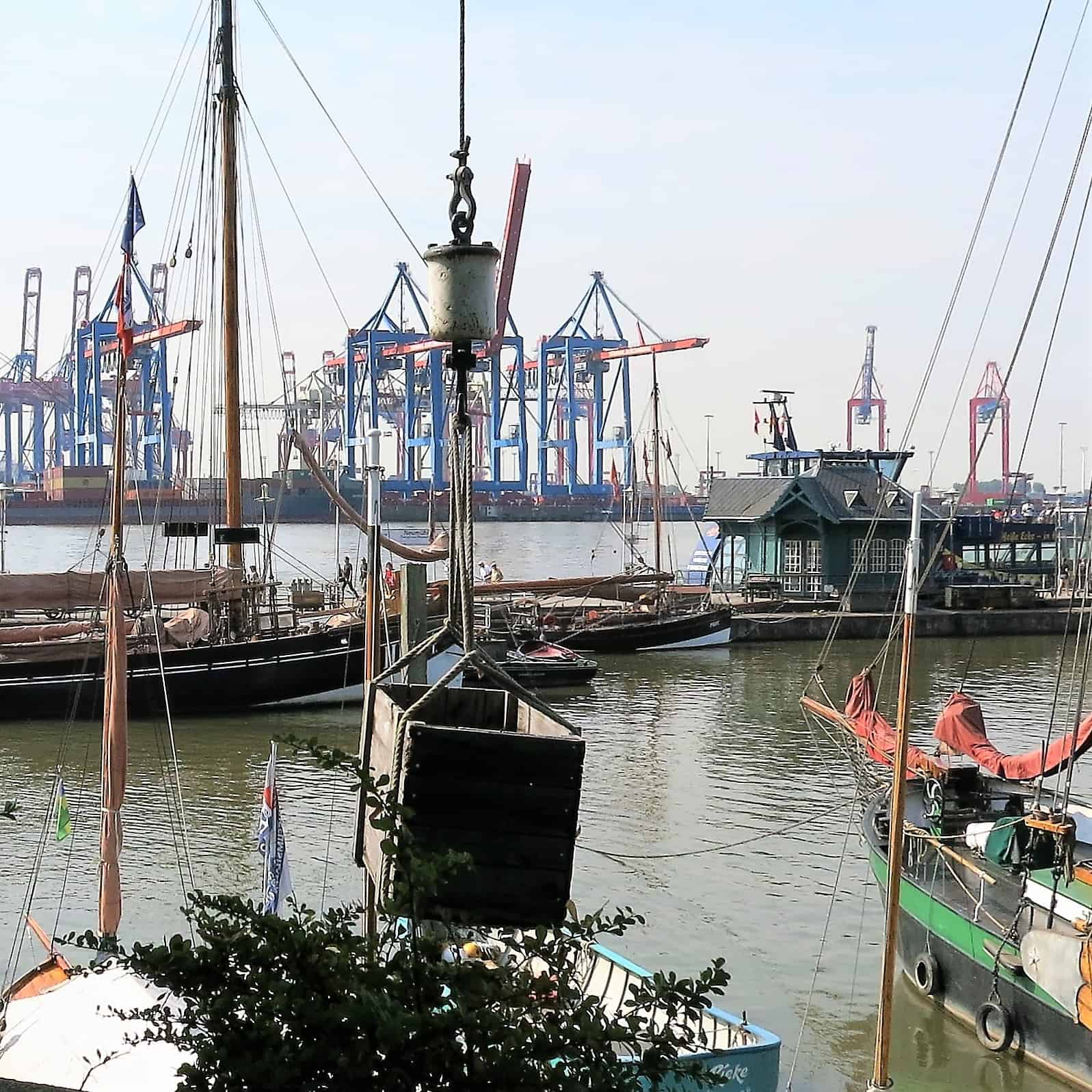 … where the Himmelsleiter, a steep flight of steps, connects the Elbwanderweg with the Elbchaussee.
According to a tradition, the name comes from “Übel gönnt” (evil gifted) (övel gönnt) and refers to the ill will of the Ottensen population towards the Övelgönners. Due to their residential location near the river, they had the opportunity to appropriate valuable flotsam and jetsam released by the Elbe before anyone else.
In 1674, Övelgönne was mentioned for the first time in the parish register of Ottensen, to which the village belonged. Today, Övelgönne is associated with the museum harbor, the old captain’s and pilot’s houses, the Elbe beach with the Strandperle and the Old Swedes.
The association “Museumshafen Oevelgönne” operates a harbor for historic motor, danpf and sailing ships at the Neumühlen ferry dock. The ships are roadworthy and also often on the way.
At the level of a ventilator building of the Elbe tunnel there is a small path. There you can let yourself be transported to another time by the charm of the lovingly restored captain’s and pilot’s houses of the Övelgönner Weg.
One of the most beautiful spots on the Hamburg Elbe is the beach near Övelgönne. But in addition there is another pearl, the Strandperle. The Strandperle is no longer an insider tip. Hamburgers are drawn there to sit in the sand, let their eyes wander over the Elbe, dream after the ships and experience the romantic atmosphere in the evening.
In September 2000, a large erratic boulder was found at a depth of about 15 meters during dredging work to deepen the Elbe’s shipping channel. Today it lies on the Elbe beach as the “Old Swede”. It has a weight of 217 tons and a circumference of almost 20 meters. Its height is about 4.5 m.

The name is most likely a combination of the two Low German words blanke and Nese, which means bright, pure nose. It probably meant a spit of land that was washed over at high tide and lay there shining clean at low tide. However, it was swept away during a storm surge in the 17th century.
Blankenese is one of the most beautiful districts of Hamburg – and one of the richest. This is not surprising given the fantastic view over the Elbe. Not for nothing is an old saying in the Hanseatic city: “A Hamburger cannot become more than a Blankenese resident.
In the east of Blankenese lies Baur’s Park. Its serpentine paths on the hillside provide ever-picturesque views of the Elbe and, on a clear day, even as far as the Harburg mountains. Between 1802 and 1817, the Altona merchant and shipowner, Conference Councillor Georg Friedrich Baur gradually acquired eleven plots of land on the northern slope of the Elbe in Blankenese. Right at the beginning, he had the Kanonenberg (Cannon Hill) erected there, from which he could observe his own incoming ships and greet them with gunfire. With a height of 75 meters, the Süllberg in the west of Blankenese is one of the largest elevations in the Hanseatic city. In the valley between them lies the Treppenviertel. Here, there is only one street that winds its way down in wild curves; the remaining houses can only be reached via stairs with a total of about 5,000 steps.
On the Süllberg is the Kaffeegarten Schuldt – coffee & cake with a view. Since 1877, the Kaffeegarten Schuldt is a charming family business that provides the most beautiful coffee in Blankenese, giving the best view of Blankenese. Accessible via a few hidden steps on Süllbergterasse. 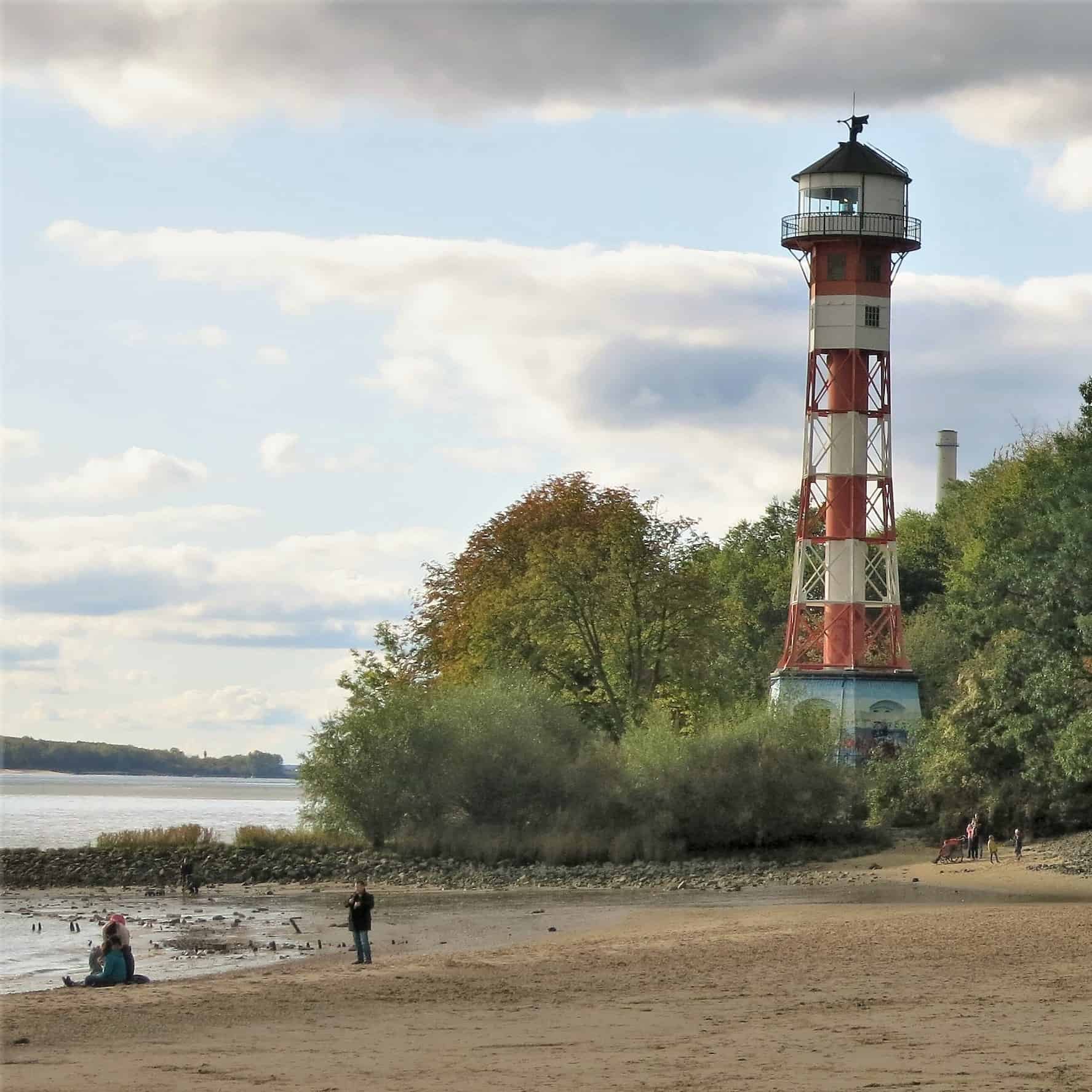 The trail leads along the Falkenstein shore from Blankenese via Wittenbergen and on to Wedel.
It is worth climbing up the Waseberg to the Bismarkstein. At 87 meters above sea level, the Waseberg is the third highest elevation in the Hanseatic city. A fantastic view awaits you at the Bismarckstein. A fantastic view of the Elbe to Wedel and over the islands of Schweinsand and Neßsand. This place is owed to the co-founder of the Holsten brewery, Anton Julius Richter, here he wanted to erect the monument to the Chancellor of the Reich. His plan was not realized, instead the monument to fallen marines was built here.
On the way down it is recommended to go through the “Roman Garden”. The park is special because it was not laid out as an English landscape garden like most gardens and parks on the banks of the Elbe, but in Art Nouveau style. The name Roman Garden comes from the use of southern design forms and plants.
On the Elbe beach you can see, especially well at low tide, the two shipwrecks of the MS Uwe and the Finnish sailor Polstjernan.
Further west you reach the beach of Wittenbergen. Arriving at the beach, the first thing that catches your eye is the red and white striped lighthouse. It is certainly one of the most photographed lighthouses in Hamburg.
The end point of the Elbe shore hiking trail is the “Willkomm Höft” at the Schulauer Fährhaus. Every ship that enters or leaves the port of Hamburg is welcomed or seen off at this point. The national anthem of the passing ships is played over a loudspeaker system on a jetty, and there is also a welcome greeting in the national language. “Welcome to Hamburg, we are pleased to welcome you to our port,” is then heard from the loudspeaker system in every conceivable language.