Tour of HafenCity with a Greeter

HafenCity represents the “youngest” Hamburg district and is special in many respects!
In the mid-1990s, the city of Hamburg decided to abandon the port use of the areas on the Großer Grasbrook and to redevelop them in terms of urban development.
Thereupon, the largest new development area in Europe was created at times. HafenCity invites – not only because of the ElbPhilharmonie – to a tour of a special kind, a Greet.

As requested, I was allowed to discover Hamburg in English with an Englishman. It was the most interesting tour of a city I have ever experienced. Gordon knew a well-founded answer to every...

Warehouse district and HafenCity interesting for all ages!

Our mixed group of three adults and four children aged 10 to 14 was very impressed by the extensive knowledge of our greeter Jürgen, which he shared with us in an informal atmosphere with his calm...

HafenCity: The new district in the heart of the city

We had great hours with our Greeter Thomas. He took a lot of time for us and had our interests in mind. But he was also able to inspire us with sights and background information that we would never... 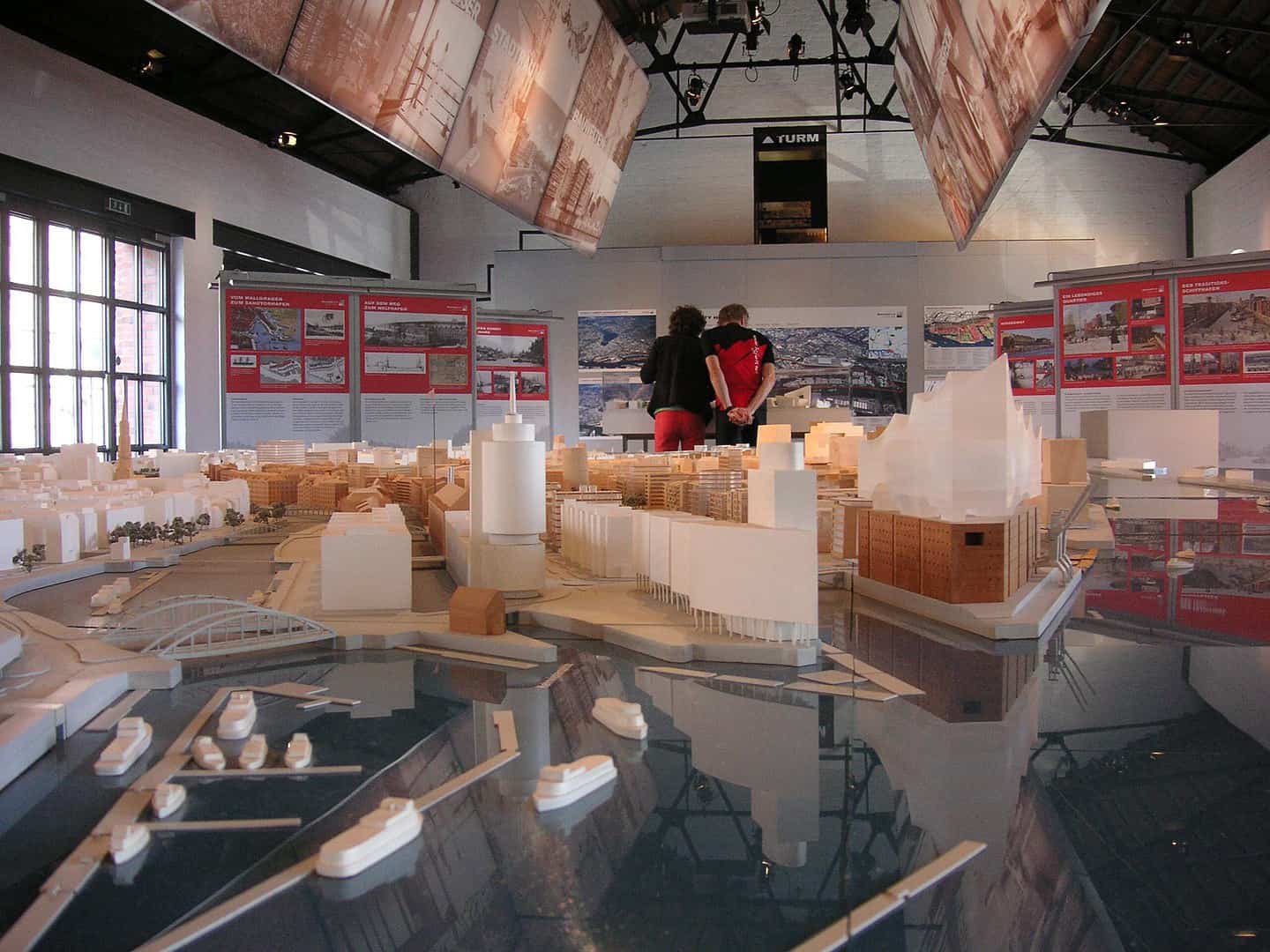 The historic boiler house is now the first port of call in HafenCity. The building (as a small power plant) used to enable the Warehouse district to be supplied with energy independently of the rest of the city. Electricity was produced here for lighting the storage facilities, as well as compressed air for operating the hydraulic winches, cranes, lifting platforms and stair elevators. Around 2000, the building was extensively refurbished and has since served as the HafenCity InfoCenter for all interested parties. Everything you should and would like to know about HafenCity can be found here – admission is free!
Following an urban planning competition, the HafenCity Masterplan was presented in 2000. This specifies where which structural uses, in which dimensions are planned (the Elbphilharmonie, as the best-known building in HafenCity, was not originally planned, by the way, but was only initiated by a business couple). The most important and central component of the visitor center is therefore an urban wooden model on a scale of 1:500. Since the first presentation, this has been continuously adapted to the current planning and construction status of HafenCity: As soon as more precise plans for a new building or construction site are presented, the corresponding “placeholder block” in the model is replaced by a more accurate one.
Nowhere else can it be understood so well what has already happened in HafenCity, what is still to be built and what position it has in the overall context of urban planning and development in Hamburg. In addition, the HafenCity InfoCenter provides information on current planning activities and gives an insight into the history of the area. Free guided tours of HafenCity are also offered regularly, and information material is also available in abundance! 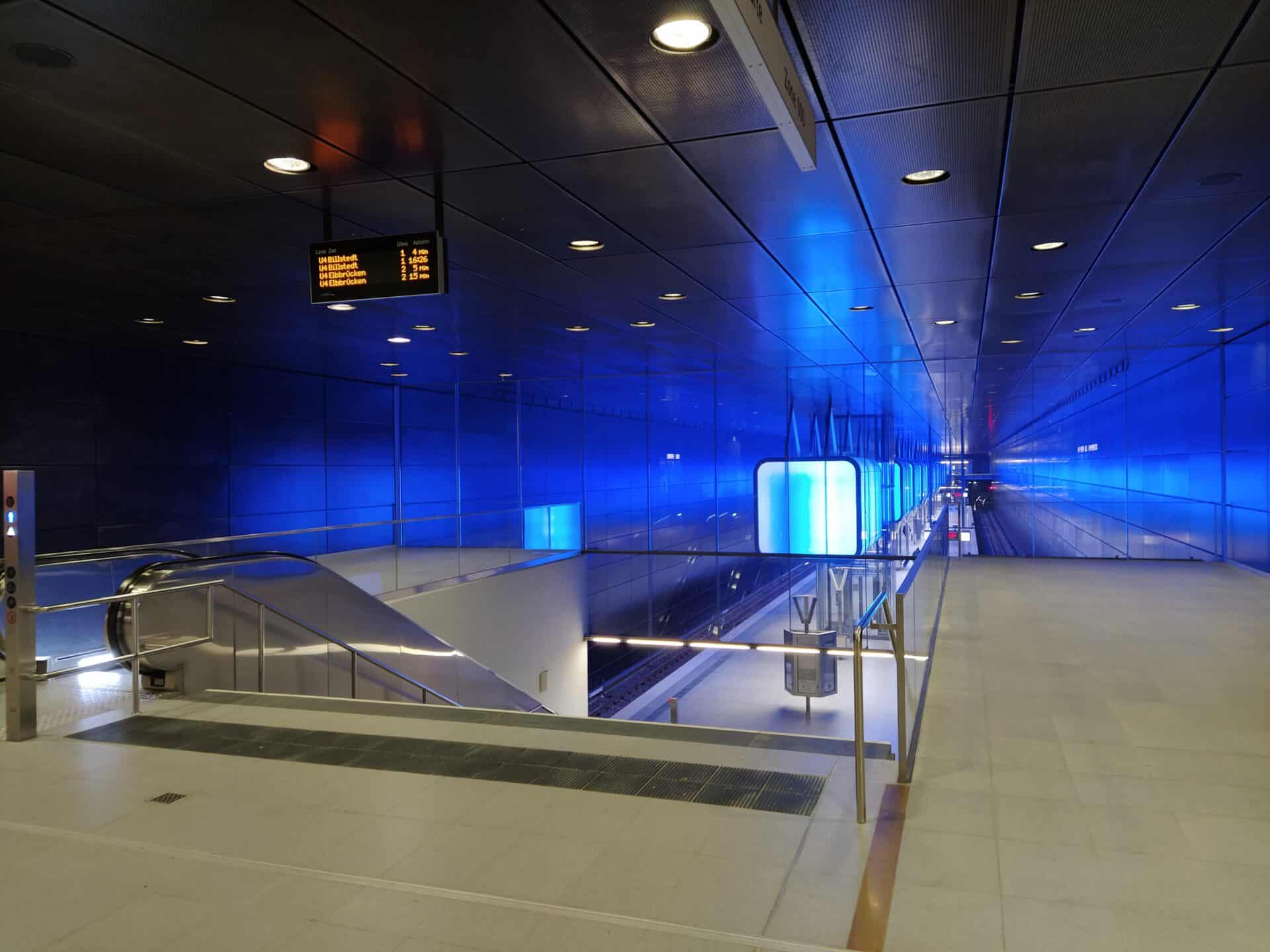 HafenCity can be reached via the Baumwall and Meßberg subway stations on the one hand – in addition, a further public transport link was planned to open up HafenCity. The decision was made – after very intensive discussion – not to build an elevated railroad or to reintroduce a light rail/streetcar system. Instead, three subway stations were planned, which were connected via a new line (U4). Each station for itself is again worth a visit!
The station Überseequartier opens up the center of HafenCity. Remarkable is on the one hand the depth: The station is located 19.5 m below ground level, with increasing depth, the wall cladding becomes darker. Secondly, there are loudspeakers next to the escalators and next to each lamp: the sound of the sea and other maritime sounds come from them, so that you could think you were actually underwater!
At the HafenCity University station, a special lighting design awaits you: in the station, the twelve large illuminated containers on the ceiling immediately catch the eye; these are intended to be reminiscent of harbor elements. On weekends and holidays, light and music compositions are performed in the subway station between 10 a.m. and 6 p.m. on the hour: The illuminated containers change color to classical music (if you look outside these times of day, there is a slow transition between the illuminated colors).
The temporary terminus at Elbbrücken (an extension across the water to Kleiner Grasbrook/Moldauhafen is being considered) is above ground and entirely in glass. This offers at the same time a change to the S-Bahn line 3, the connection over the main street there over a so-called “Skywalk”. Construction of the Elbbrückenquartier has not yet begun; that of Baakenhafen is in full swing. Instead, the station offers a good view of the construction activities, the Elbe bridges and the Norderelbe! 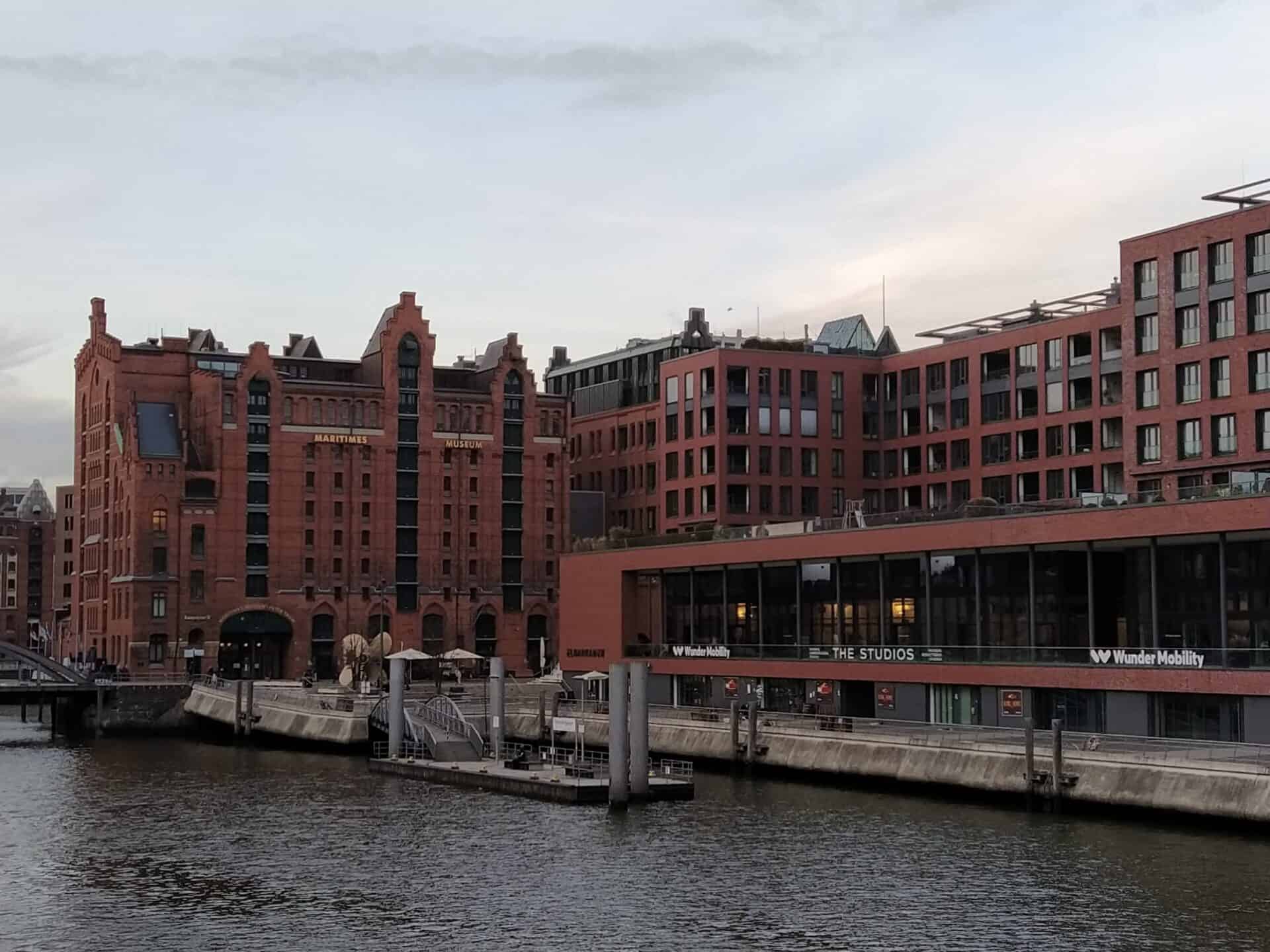 The former Kaispeicher B (Kaispeicher A is now the “lower” part of the Elbphilharmonie!) is one of the buildings that was preserved despite the construction of HafenCity. The building was constructed around 1880, before the Free Port was established and about ten years before the Warehouse district was built. Subsequently, mainly tobacco, rum, wine, grain and tea were stored.
In 2000, at the same time as the HafenCity plans were presented, the building was listed as a historical monument, and shortly afterwards it was extensively renovated with funds from the City of Hamburg. The International Maritime Museum moved in! This goes back to the extensive private collection of Peter Tamm and was located from 1991 under the name “Institute for Shipping and Naval History” as a private, non-public museum in Hamburg-Othmarschen. The foundation of the Maritime Museum was not without controversy (the reason was a strong focus of the exhibition on warships). Nevertheless, after the opening and the first visit, one had to seriously ask: “Why wasn’t there something like this in Hamburg before?”
The core of the collection is about 50,000 ship models. In addition, a wide range of everything related to seafaring is offered: for example, many historical naval and seafaring uniforms are displayed, and there are also many paintings and an extensive collection of photographs related to seafaring and shipbuilding. It is easily possible to spend half a day or even a whole day here. The souvenir store and bookstore are also highly recommended. A popular photo motif is the ship’s propeller in front of the entrance. 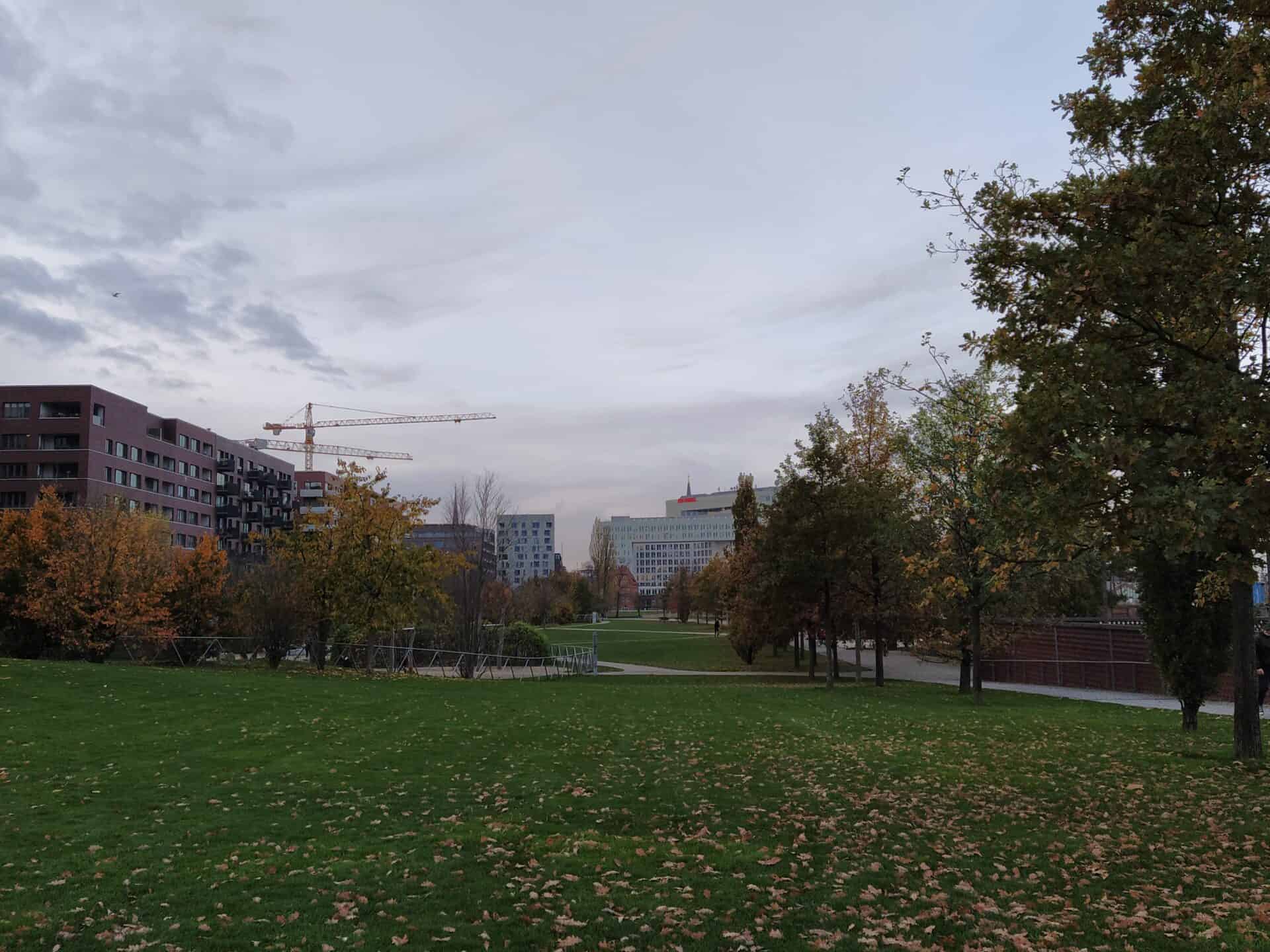 Comparatively few recreational areas were created in HafenCity! Whether the background was that parking areas could not be sold to third parties or the planners thought that people prefer to sit by the water anyway: Lohsepark, which can be found directly at the HafenCity University subway station, is the great exception! It stretches in a tube shape from Baakenhafen in the south to Ericusgraben in the north. Formerly, the Hanover train station was located on this site.
A combined area of walking paths, sunbathing areas and play areas was created, which is available to the public around the clock. Characterized by curved and diagonal paths, benches and play areas. The bent trunks and branches of trees that had to be felled in Versmannstrasse (for the construction of HafenCity) found a new use here as climbing frames. Among the exotic and native woody plants planted, the existence of fruit trees is particularly noteworthy: Their fruits may be taken away!
Unfortunately, however, Lohsepark also has a dark chapter, which is commemorated by the memorial denk.mal Hannoverscher Bahnhof. From here, several thousand people – mostly Jews, Sinti and Roma – were deported to concentration and extermination camps between 1940 and 1945. The station’s location, close to the city center but at the same time secluded, was well suited for the purposes of the National Socialists. A relic of the now listed platform 2 can be found here – as well as a joint that leads from the former station forecourt along the historic track to the platform through the park. Of course one is pointed out locally by means of display boards and documentations again to the historical meaning of this place. 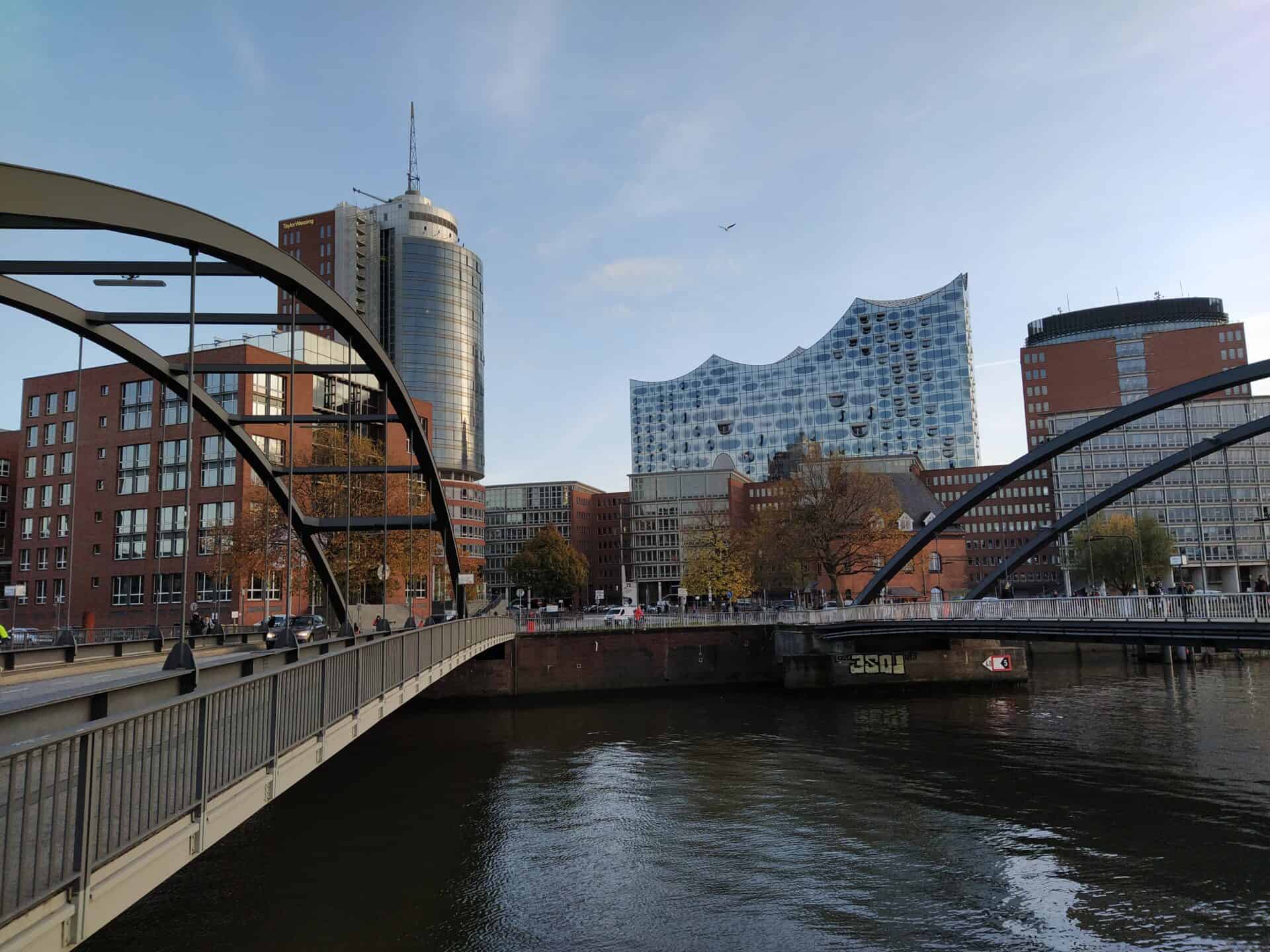 In the mid-1990s, the city decided to abandon the port use of the areas on Großer Grasbrook and to redevelop them in terms of urban development. The central location offered the opportunity to expand the inner city by about 1/3 of the area! By 2030, residential units for about 14,000 people and workplaces for up to 45,000 people are to be built on the site, and 3,000 hotel rooms will also be created. In addition, up to 10,000 schoolchildren and students as well as around 50,000 customers and tourists per day are calculated.
The biggest special feature and challenge for the builders of the new district was and still is flood protection: they deliberately chose not to embank the site – instead, all the buildings were erected on pedestals built especially for them. Despite the modern – in some places untypical for Hamburg – architecture, care is also taken throughout not to forget the neighborhood’s past: for example, many of the pedestals and floors are designed in the style of oriental carpets that were once stored here. The lanterns are designed to resemble harbor cranes, the seating to resemble waves. Several harbor buildings have been rehabilitated and are experiencing a second life through new uses! The street squares were named after famous explorers/seafarers, the streets often after other port cities. HafenCity’s location in the former free port is also still recognizable: the control stations, placed at each bridge leading into the district, have been preserved.
But HafenCity’s greatest asset is its location on the water and its proximity to the harbor! Even if some corners still look provisional and others are still under heavy construction: The fears that an “office district” would emerge – i.e. a “dead” part of town after business hours – have not materialized! In addition to the strong demand for the apartments, the retail spaces are in great demand. In addition, there are an extraordinary number of recreational facilities, tourist attractions, as well as educational institutions and restaurants.
Photo: Matthias Vollmer