North of the Außenalster lake in the Winterhude district is Hamburg’s more than 100-year-old Stadtpark, the City Park with its meadows and forest, lake and gardens. It can be easily reached from the Borgweg and Saarlandstraße subway stations and from the Alte Wöhr S-Bahn station. From many places on the banks of the Alster, you can see the dome of the planetarium, which points the way to the Stadtpark. You can even paddle a canoe from the Alster into the middle of the park. With or without a visit to the planetarium, the walk is worthwhile. Young and old, families and singles, lazy sunbathers and ambitious recreational athletes meet in the Stadtpark. With 148 hectares of space, there is enough room for everyone. A tour with the Hamburg Greeters is worthwhile…

We had a wonderful afternoon with our greeter Heidi. She showed us the city park with the planetarium and the island of love and told us interesting things about it. Unfortunately, the time passed... 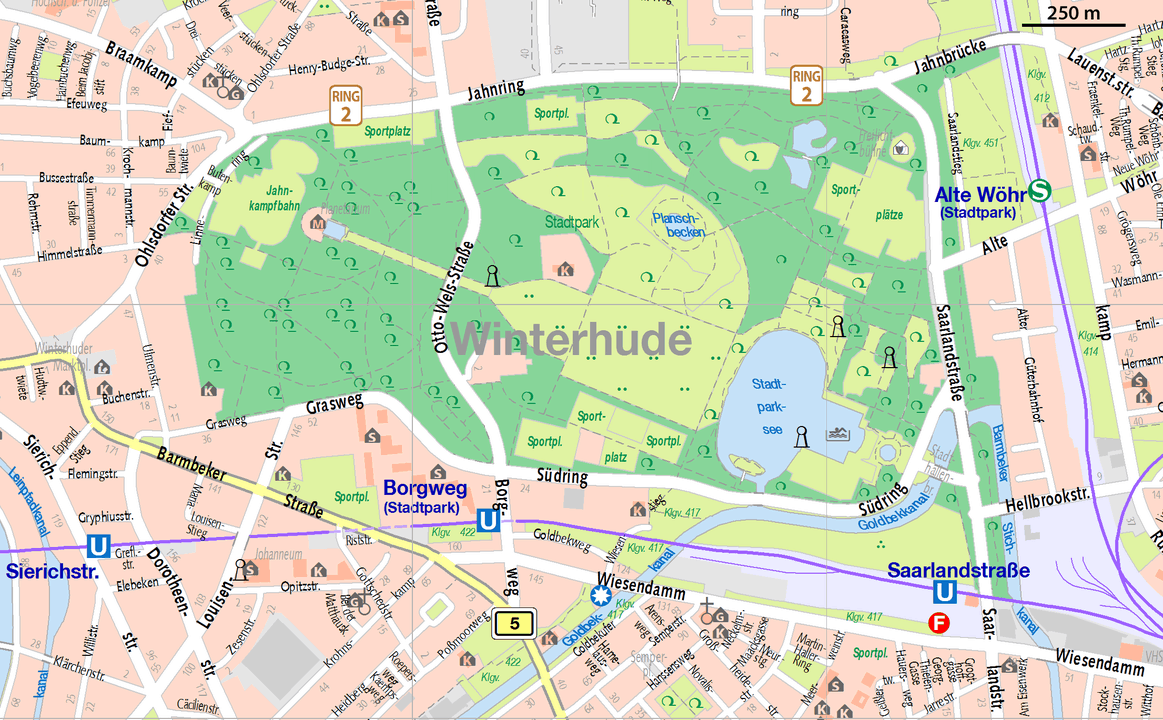 History of the city park

At the beginning of the 20th century, the former villages of Winterhude and Barmbek had developed first into suburbs, then into districts of the rapidly growing metropolis of Hamburg. Everywhere, meadows and fields became residential quarters; the Ringbahn connected the neighborhoods with the city center. The Senate and the City Parliament decided to purchase the Sierich grove and adjacent areas for the creation of a large public green space. Before the First World War, after an inconclusive public design competition, Chief Planning Director Fritz Schumacher and Chief Engineer Ferdinand Sperber submitted the design according to which the city park was laid out in 1910. Finally, on 29.06.1914, the first parts were released to the public.

With the World War the construction work was delayed; also Hamburg’s first horticultural director Otto Linne had to go to the front at first and on many beds now potatoes and vegetables were grown instead of flowers and ornamental shrubs. In the twenties, the paddling pool and the open-air stage were completed, as were the buildings, especially the large Stadthalle on the lake. The town hall was destroyed in the Second World War and was not rebuilt; it is commemorated by the town hall bridge and the jetties there, as well as the brick walls of the swimming pool. Of the city park buildings of this period, the Trinkhalle near the Borgweg entrance and the Landhaus Walter on Otto-Wels-Strasse are preserved. After World War II, Nissen huts stood in the city park until the fifties as emergency quarters for the bombed-out population.

For the 100th anniversary of the opening, the park was carefully renovated and restored in 2014, without changing its more than a century old structure. 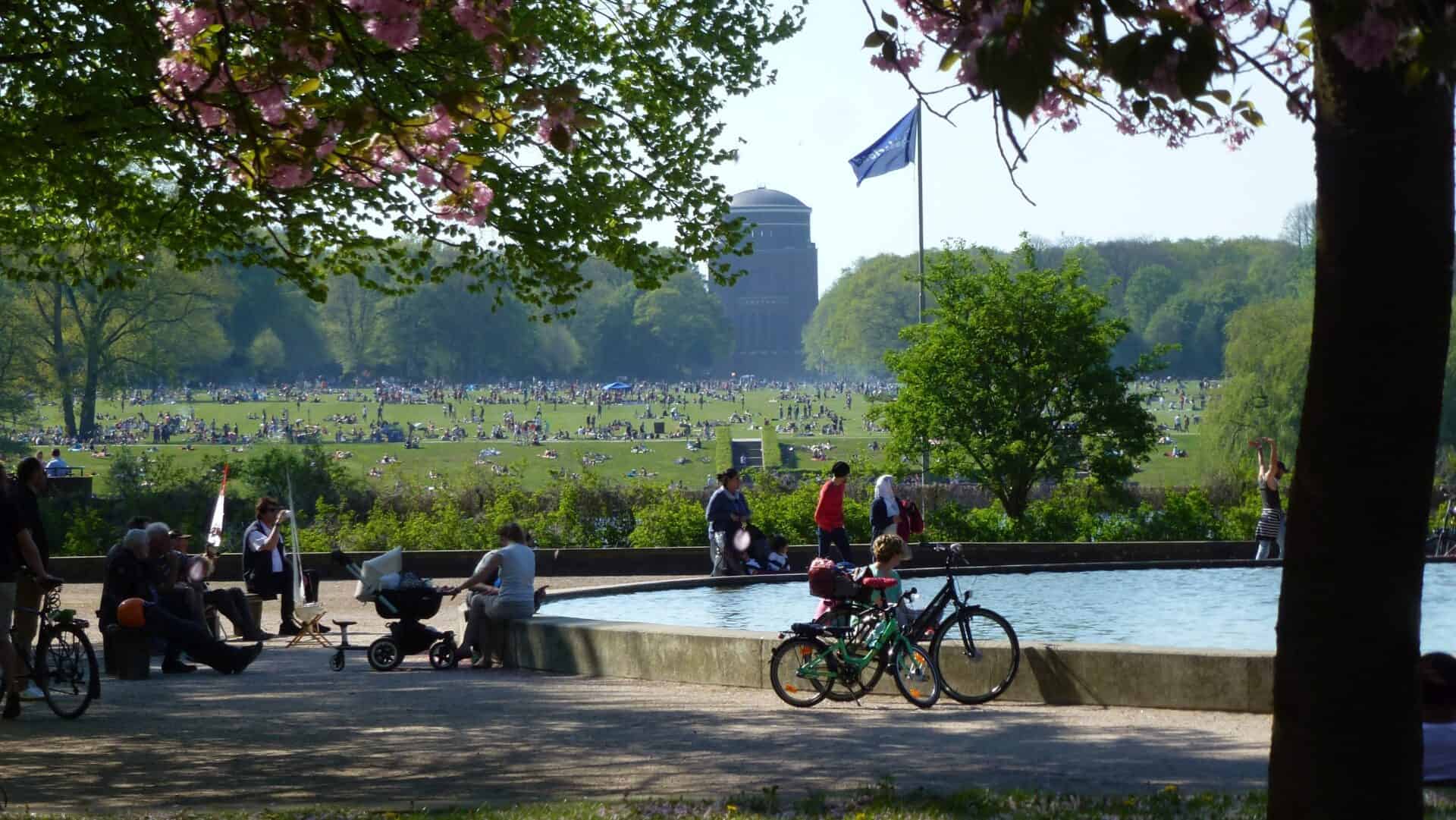 In the center of the park there is one thing above all: plenty of space. The festival meadow offers 15 hectares of space for picnics and barbecues, for soccer, badminton and Frisbee, for playing and for flying kites. The main visual axis of the city park runs right through the middle of it, so that you can see both the mighty tower of the planetarium and the city park lake almost everywhere. If you come from the planetarium, two large stone sculptures flank the entrance to the meadow, which now gently slopes down to the lake. For David Bowie, Pink Floyd and most recently the Rolling Stones, the Festwiese even became a concert location with tens of thousands of spectators.

The oval of the Stadtparksee is connected to the Außenalster via the Goldbek Canal. So it can be reached wonderfully with the own or rented canoe or SUP. The romantic “Liebesinsel” at its southern end also hosts a boat rental with pedal boats, rowboats and canoes. A sheet pile wall guarded by two bronze centaurs separates the lake from the natural swimming pool Stadtparksee, which offers swimming fun and sunbathing lawns in summer. There is also a large beer garden here, from which you can watch the sun set behind the planetarium. Those who visit the Stadtpark from the Saarlandstraße subway station enter it via the Stadthallenbrücke and have to decide at the model boat pool whether the path should lead north or south around the bath and lake. 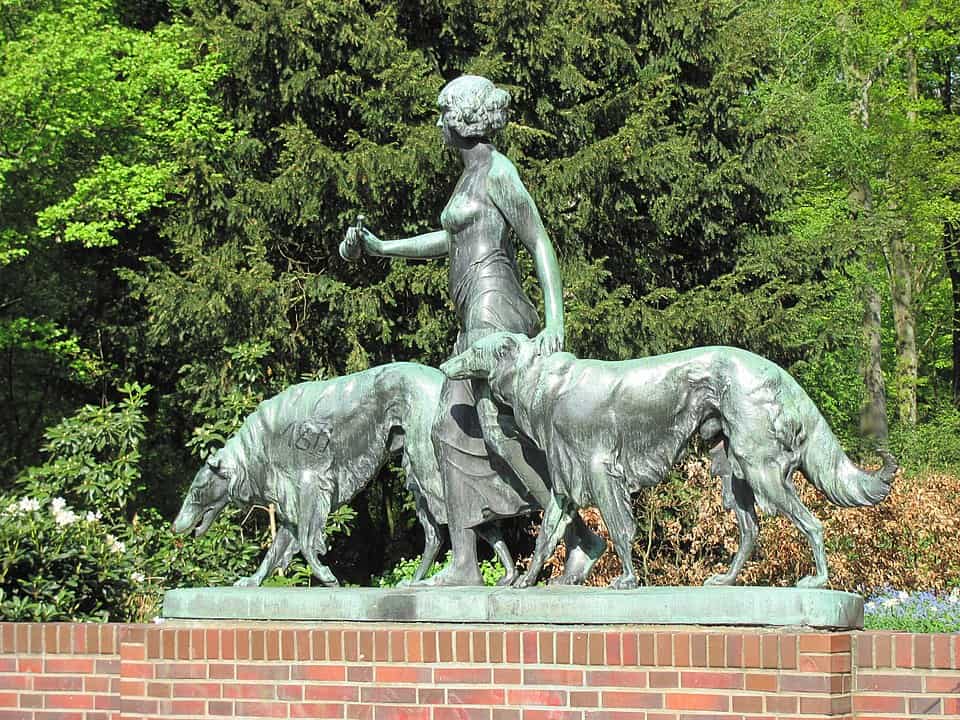 Garden and other works of art

From the beginning, the city park was intended to serve various needs: recreation in fresh air, rest and relaxation from everyday life in the big city, sporting activities, and natural history as well as aesthetic education. Its areas are designed to be as varied as its purposes. In the west, around the planetarium, the former Sierich grove has been preserved as a species-rich mixed forest crisscrossed by numerous paths. In the east, along the axis of the city park lake, which extends to the open-air stage, there are landscaped gardens and groves. Here is the rose garden, the hedge garden as well as the architectural gardens; at the southern edge of the park follow each other the spa garden, the rock garden and the roundel garden.

Fine art has also had its place in the Stadtpark from the beginning. Alfred Lichtwark, former director of the Hamburg Kunsthalle, championed the exhibition of many sculptures. Thus, in the spa garden opposite the drinking hall stands the bronze “Diana with dogs” of 1911, in the hedge garden a “Diana on the hind” of 1910, and near it under a magnificent roundel of blood beeches the penguin fountain 1925. The two reclining centaurs Triton and Nereide of 1912 guard today the natural pool and the lake. The two “Bathing Women” at the entrance to the Great Festival Meadow, the “Children with Foals” on Love Island, the “Dancing Girls” near the Rose Garden and the polar bears near the Model Construction Pond and the south entrance are made of shell limestone. The bronze Heinrich Heine by Hugo Lederer, erected in the city park in 1926, was torn down and melted down by the National Socialists in 1933; it is commemorated today by a replica in front of the town hall. 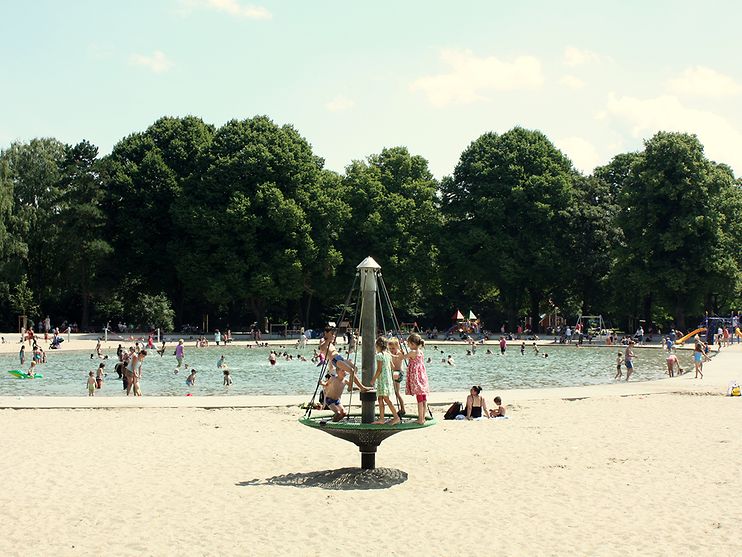 Paddling pool and other playgrounds

Families with children also love the city park. Probably most of all the large playground by the 3,000-square-meter paddling pool, which is embedded in a giant sandbox. This is also where the sunken cargo ship is located with its climbable cargo harnesses. A little to the east, there are ropeways and, for brave children, what are probably the highest plate swings in town. A kiosk with chips and ice-cream and a café with a terrace make it possible to combine a visit to the playground with a snack. Another popular playground with a ropeway is located near the southwestern entrance to the park in Grasweg, and a miniature golf course is located on the southern edge of the large meadow. On the edges of the city park are various sports facilities: to the east, near Saarlandstraße and the Alte Wöhr S-Bahn station, the rugby arena and tennis courts, near City Nord the home field of the Hamburg Pioneers (American football), and to the west, under the tower of the planetarium, the old athletics arena with the martial name Jahnkampfbahn. From 1934 to 1952, there were even regular motorcycle and car races in the city park. 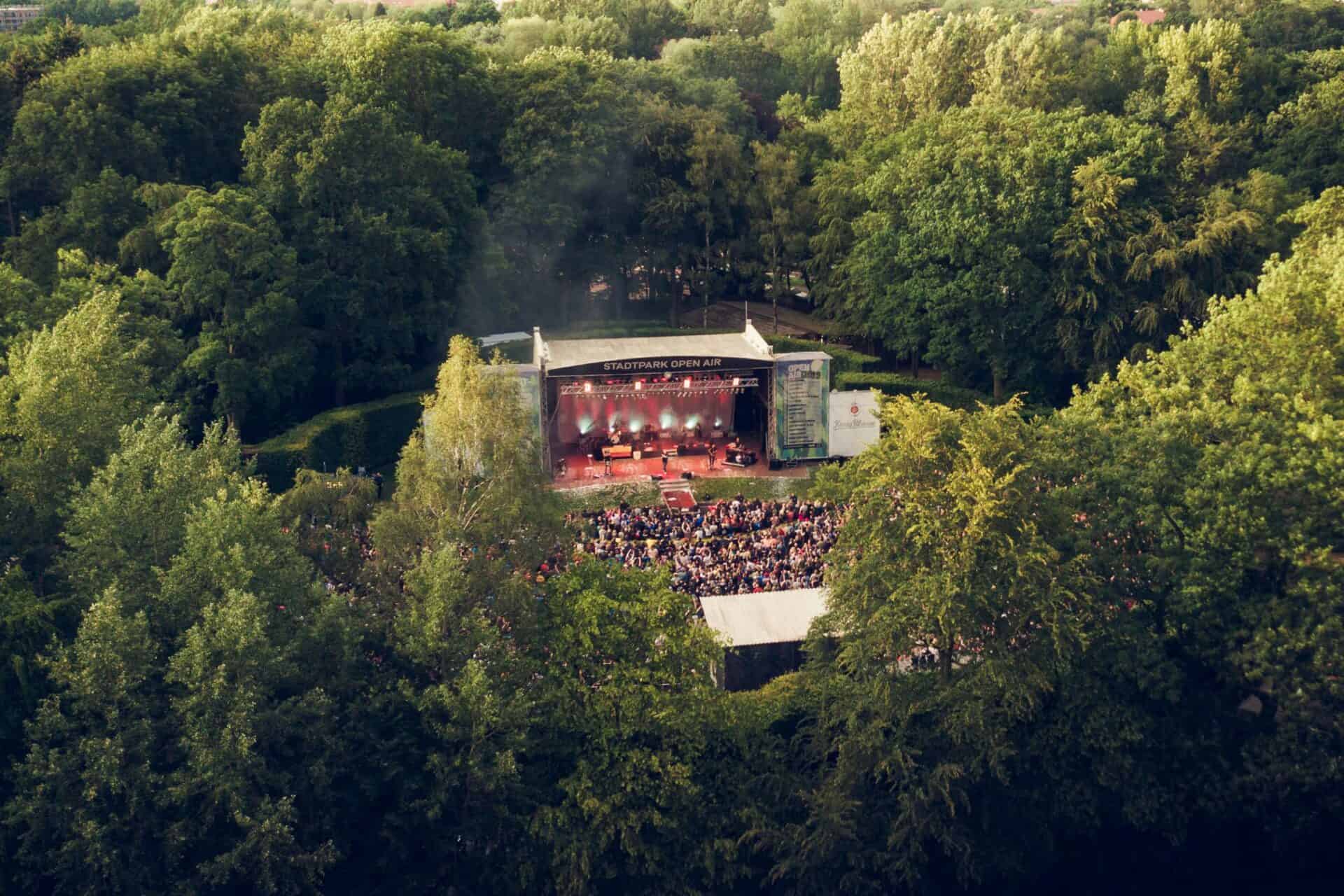 A firm institution in Hamburg’s music scene is the open-air stage in the northeast corner of the park. Up to 4,000 guests can experience concerts of rock, pop and jazz here during the summer season, and well-known Hamburgers such as Lotto King Karl and Stefan Gwildis regularly perform here. Helge Schneider can be seen on stage here every August, and international highlights such as Bob Dylan and Santana have also performed here. For 2021 – postponed because of Corona – concerts with Sting and Deep Purple are on the program.

When rocking behind the high hedges of the fully booked open-air stage, often just as many guests gather outside and unpack their blankets, their grills and their drinks. Because the music reaches far beyond the area of the stage; the basses can still be heard well in the beer garden near the swimming pool. For this reason, the open-air concerts have to start and end rather early to protect the residents.

Another music stage in the Stadtpark since 1996 is the Downtown Blues Club at Landhaus Walter, near the Borgweg subway.

The historic Stadtpark motorcycle and car races are commemorated in late summer by a revival motor sports event with vintage cars, which then run demonstration races on a cordoned-off area of Saarlandstraße. 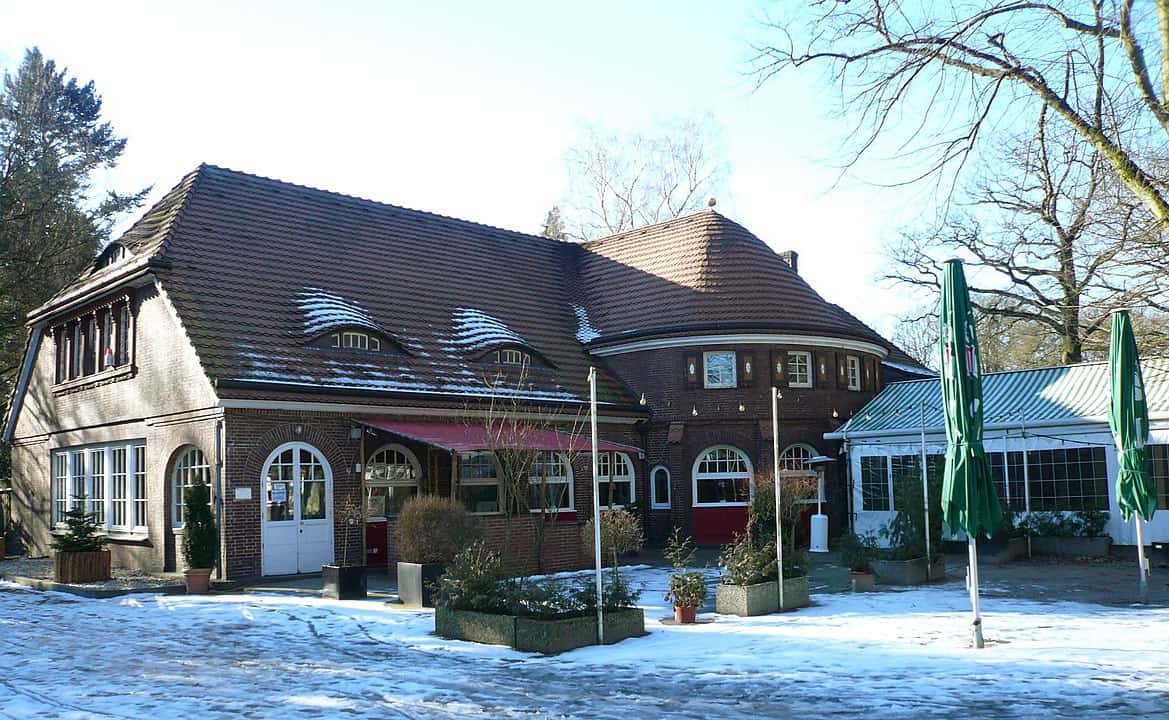 Gastronomy in the City Park

The typical food and beverage supply in the city park in summer is actually the own (barbecue) picnic on one of the many meadows. The supermarket on Saarlandstraße and the kiosks on Borgweg have a large selection of barbecue food, sandwiches and cold drinks ready, so that visitors can still supply themselves immediately before entering the park.

But there are also gastronomic offerings in many places. Where the town hall and the main restaurant once were, the “summer terraces” and the “bay” are now located on the former piers, and between the model boat pond and the natural swimming pool, the beer garden of the “Sierich” attracts visitors with its expansive view. A family restaurant with a beer garden is the large Landhaus Walter, and a little to the north, also on Otto-Wels-Strasse, is the “Parkvilla” with its large garden. In the former Trink-Kurhalle near the Borgweg entrance there is a cozy café called “Trinkhalle,” and two other pleasant cafés are set up in former toilet stalls: the “Café Claudette” near the Jahnkampfbahn and the “Lese-Café” between the Rose Garden and the open-air stage. Café Schmidtchen has opened on the first floor of the planetarium, and finally the café with the terrace and snack bar by the paddling pool.

Gone, on the other hand, are the pre-war buildings of the café at the Stadtpark lake across from the Liebesinsel and the legendary “dairy farm” in the north, where until the war there were real dairy cows for the big city children to see and their fresh milk to drink.