Together with the Speicherstadt, the Kontorhaus Quarter has been a UNESCO World Heritage Site since 2015.

It was built from about 1912 onwards where thousands of people previously lived in poor conditions in one of the notorious “Gängeviertel” districts. An entire quarter of rented office buildings was built here – an impressive and worldwide unique collection of clinker brick buildings with beautiful design elements.

Even today, the Kontorhausviertel Hamburg walking tour is fascinated by the atmosphere created by this architecture and small stores, cafes and restaurants invite you to linger.

Great, interesting, informative and fun greet through the Warehouse district, the Kontorhaus quarter and the Deichstrasse with our two greeters Silke and Ulli. We enjoyed it very much and had a lot...

A walk through Hamburg Altstadt 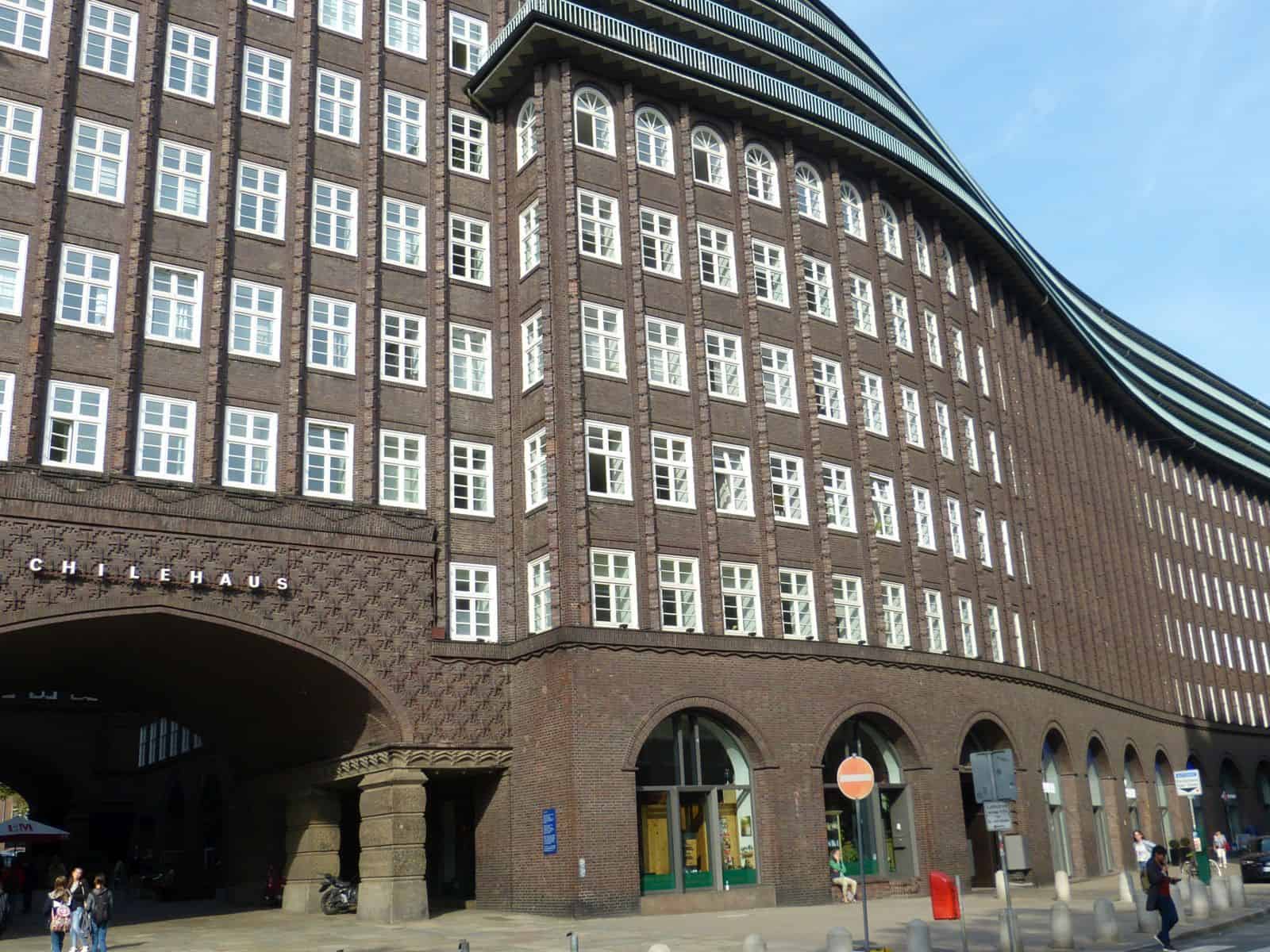 From the merchant’s house to the Kontorhaus
Until the second half of the 19th century, the Hamburg town house combined three functions. The merchant lived in it, stored his goods there and also conducted his business from there. Later, the wealthy merchants moved to the Alster and Elbe rivers, the goods were stored in the Warehouse district, and separate houses were built for the increasingly complex office activities. From the 1880s, the Kontorhaus thus came into being.

For tenants only the best
The most modern facilities such as paternoster, central heating, telephone connection combined with representative entrance areas were attractive to tenants. Since only the exterior walls have load-bearing functions, flexible floor plans were made possible. Typically, shipping or foreign trade companies had the Kontorhaus built for them, and companies with which they cooperated moved in as tenants. Short distances were an advantage at a time when many documents were still transported in the original and not by mail.

Early office building – today sight
Today, a good 240 Kontorhäuser are still preserved, they are located throughout downtown Hamburg. Behind many a door, imposing entrance areas and staircases are hidden – sometimes even a paternoster still runs. Only when walking through the Kontorhausviertel, however, one feels the uniqueness of this ensemble of brick expressionism, which is also internationally unparalleled. 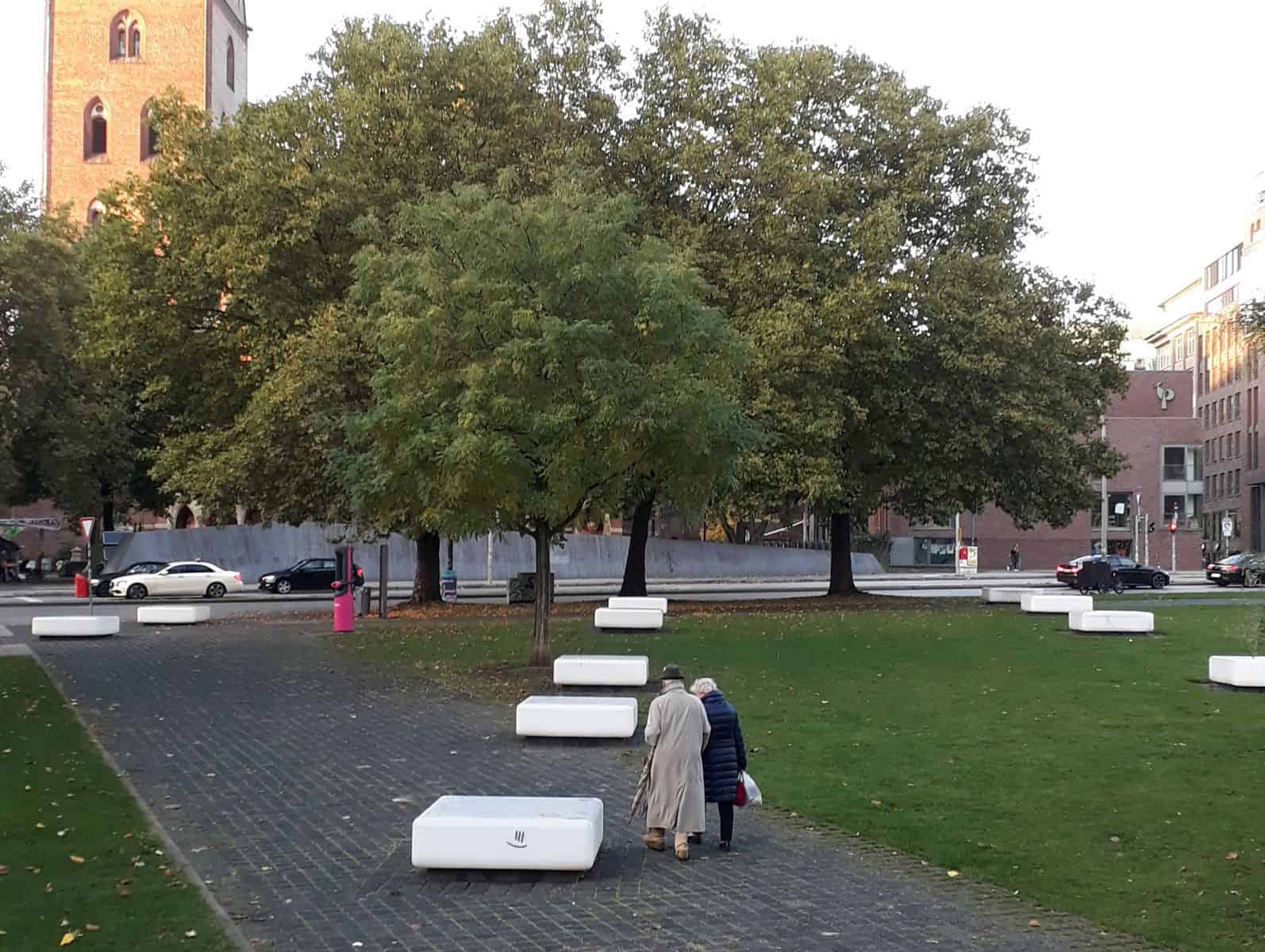 The castle, the cathedral, the school
Here on this elevated site was on an old trade route the nucleus of Hamburg, the Hammaburg. About 1,200 years ago, the city still fit on this place, hardly imaginable. One was protected from high water and could see who was approaching the settlement.

Multiple times the city was burned down and rebuilt. The plastic ashlars that can be seen in the square today represent the pillars of St. Mary’s Cathedral, built in the Middle Ages. The cathedral was demolished in 1805 and the imposing building of the Johanneum, a Hamburg school for scholars, was subsequently built on the square. After World War II, archaeological excavations were carried out on the square, but only recently was the final evidence found that the nucleus of Hamburg was located here.

Around the Domplatz today
If you look around the Domplatz today while walking through the Kontorhausviertel, the first thing that catches your eye is the Petrikirche, the oldest of Hamburg’s five main churches. In the basement of the bakery further to the right, one finds excavations from the 12th century. Here you can have a coffee amidst the old wall remains. Opposite is the building of the ZEIT, where Helmut Schmidt had his office as editor until his death. 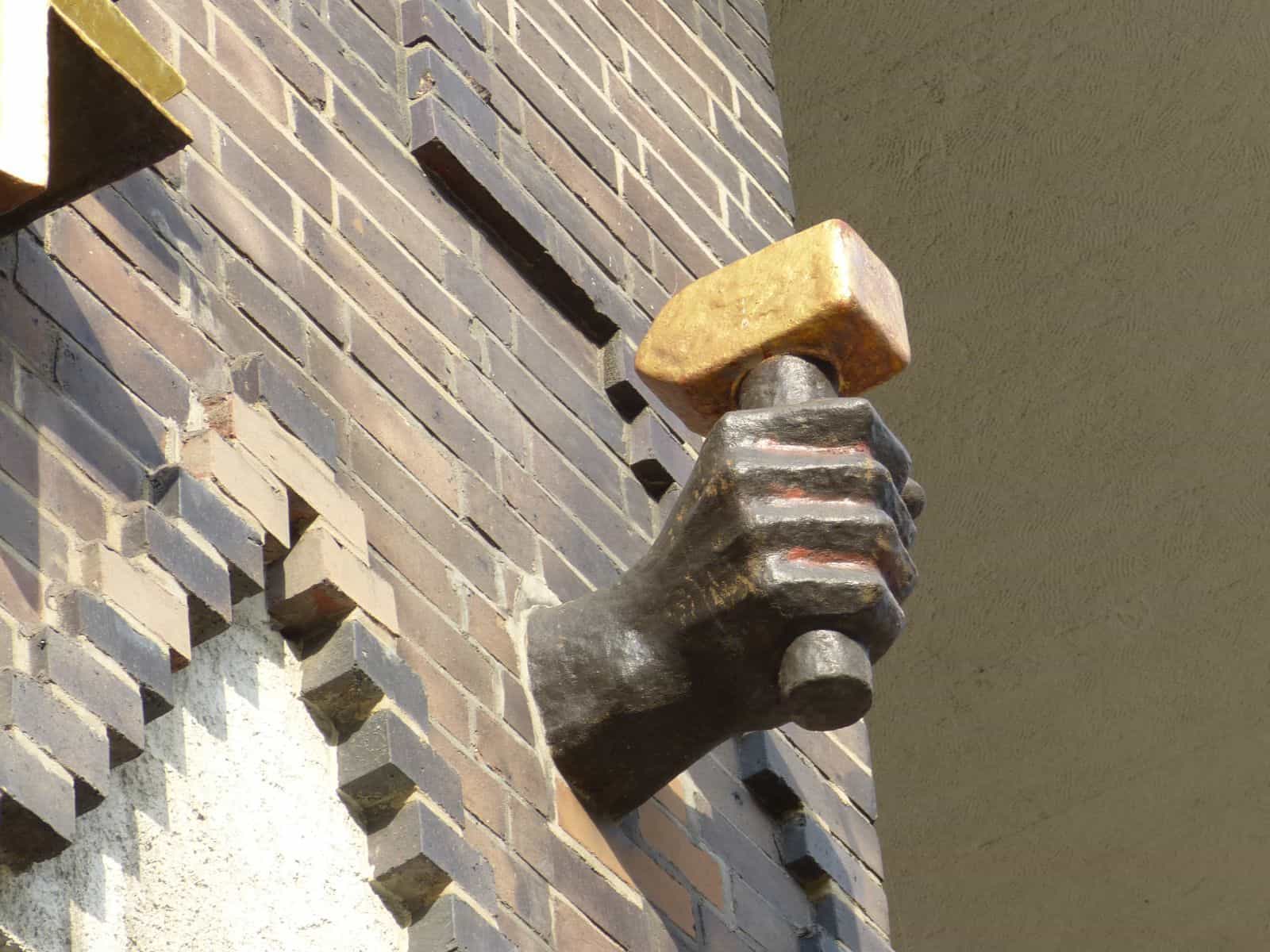 Brick shapes Hamburg’s face
From the 1890s, the brick façade became established, a material that still characterizes the Hanseatic city today. Not only the different color of the bricks used makes each house appear different, the architects also made use of various design patterns to make the houses real eye-catchers to this day. For example, bricks were turned 45 degrees, as in the Chilehaus, or gilded, as in the Sprinkenhof. Many houses were decorated with sculptures, some showing professions of the time. Other houses bear symbolic ceramic elements as ornaments, as individual pieces or applied to the entire façade. There is the Andean bird on the facade of the Chilehaus or the terracotta reliefs on the Sprinkenhof, which show symbols of trade and crafts.

Clinker sound
Clinker is a special type of brick. Bricks, which are fired at particularly high temperatures, sound when they are knocked together. From this derives the term clinker. The color can be influenced by adding different materials. Not all clinkers are smooth and even. The unevenness of the clinker bricks of the Chilehaus gives its facade a unique expression. The builder had inadvertently purchased rejects. From today’s perspective, a stroke of luck. 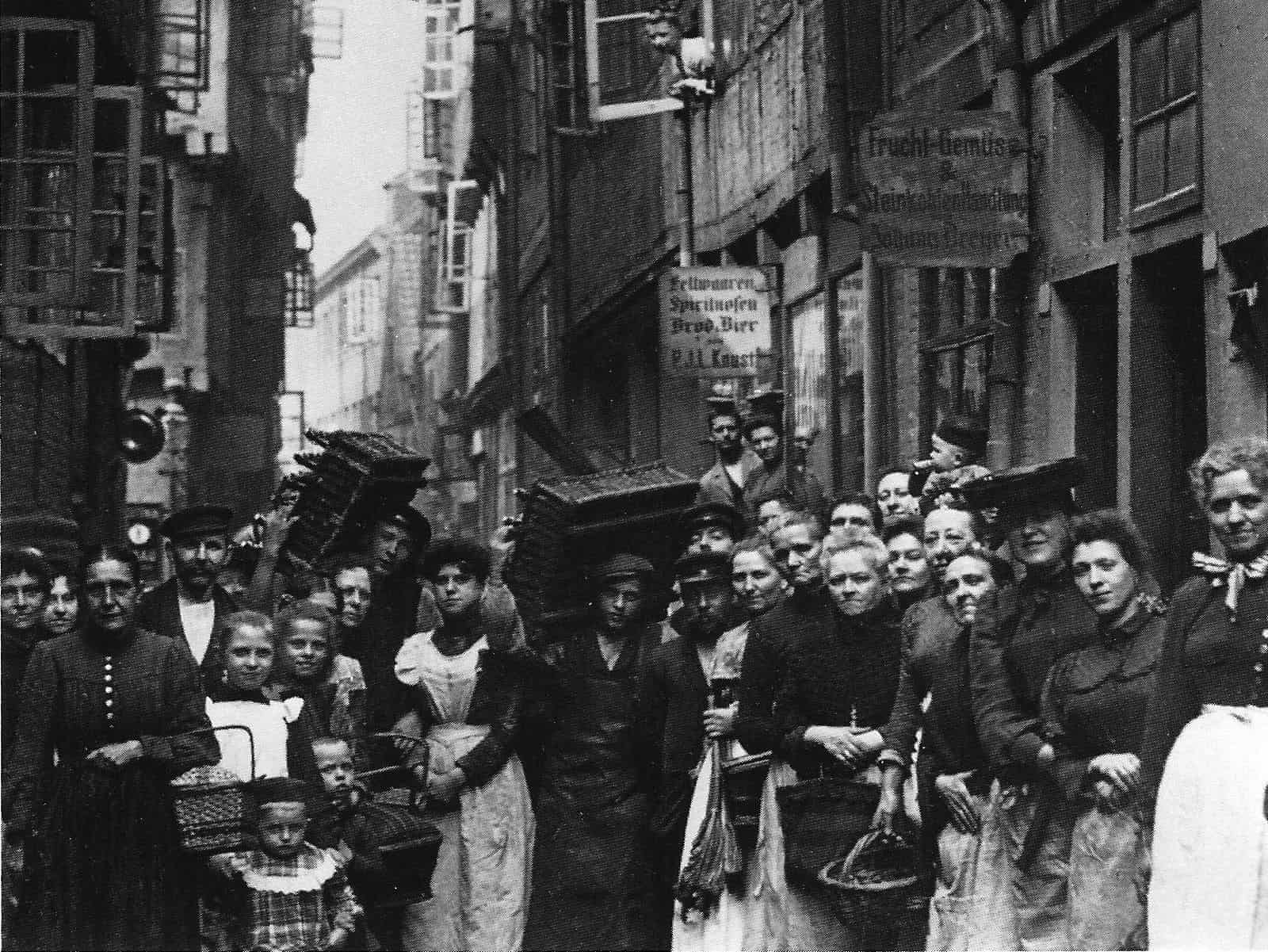 Hamburg’s slums
Before the construction of the Kontorhäuser, people lived in this quarter under the poorest conditions. Here was one of the notorious Hamburg Gängeviertel. They were created in the 17th and 18th centuries, when the gardens behind the houses were built more and more densely due to the strong population growth. These alleys (“Gänge”) were so narrow that in many cases hardly any light fell into them and they could not be entered by any vehicle. The narrow and damp dwellings were breeding grounds for disease and they were opaque to the authorities. It was feared that political unrest might emanate from them, and they were no advertisement for the thriving commercial city that had just spruced itself up with the construction of the main railway station and the town hall.

Offices instead of apartments
At the end of the 19th century, the demolition of the Gängeviertel began – the area remaining on the site of today’s Kontorhausviertel was the last to come up. Initially, new apartments were also to be built here, but it was quickly realized that these would be too expensive for the existing population and that more money could be earned with offices. At the beginning of the 1920s, about 3,900 people still lived in today’s Kontorhausviertel, who then had to move to other districts, some of which were newly built. 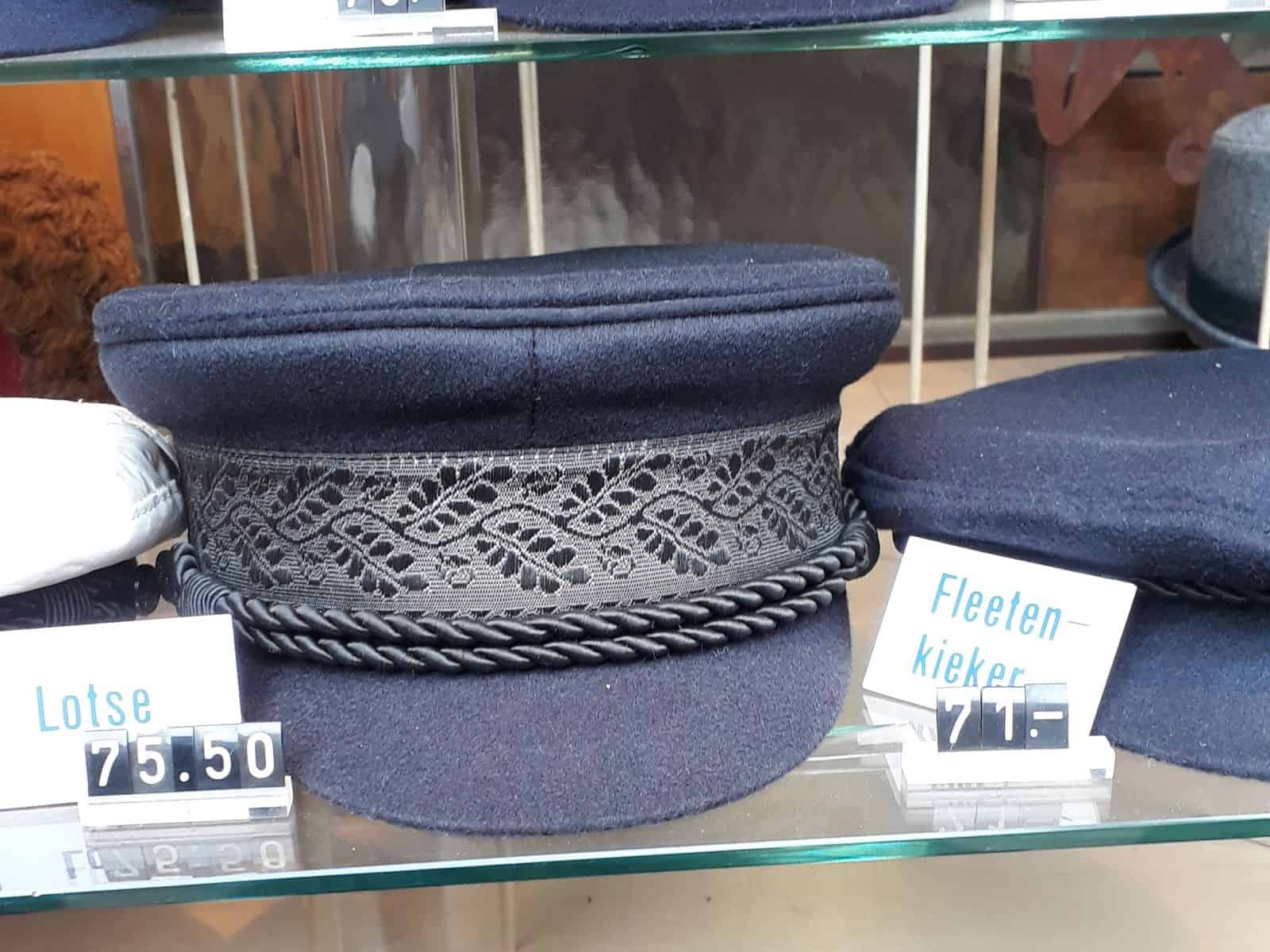 Today in the Kontorhausviertel - not only offices

Shopping very individually
Still only a few people live in the Kontorhausviertel. But it seems very lively. Few quarters in the city center have so many individual stores and gastronomic offerings. Small, owner-operated stores, some with a long tradition, invite you to stroll around and discover unusual souvenirs. A cap from the place where Helmut Schmidt used to buy his headgear, or would you prefer a tea from one of Hamburg’s oldest specialty stores?  On the Burchardplatz a beautiful weekly market takes place on Tuesdays and Thursdays, also here you can find one or the other culinary souvenir from local vendors.

Eating and drinking – something for everyone
Who would rather eat something, will find on the market, but also elsewhere, especially during the day, a wide variety of inexpensive ways to satisfy his hunger. From home-style Hamburg cuisine to authentic pasta to the hip Kurdish-Turkish restaurant, everything is there. And a coffee roastery can be found as well as the cocktail bar to ring in the evening.
Who prefers it culturally, looks at exhibitions or galleries, which are located throughout the district. 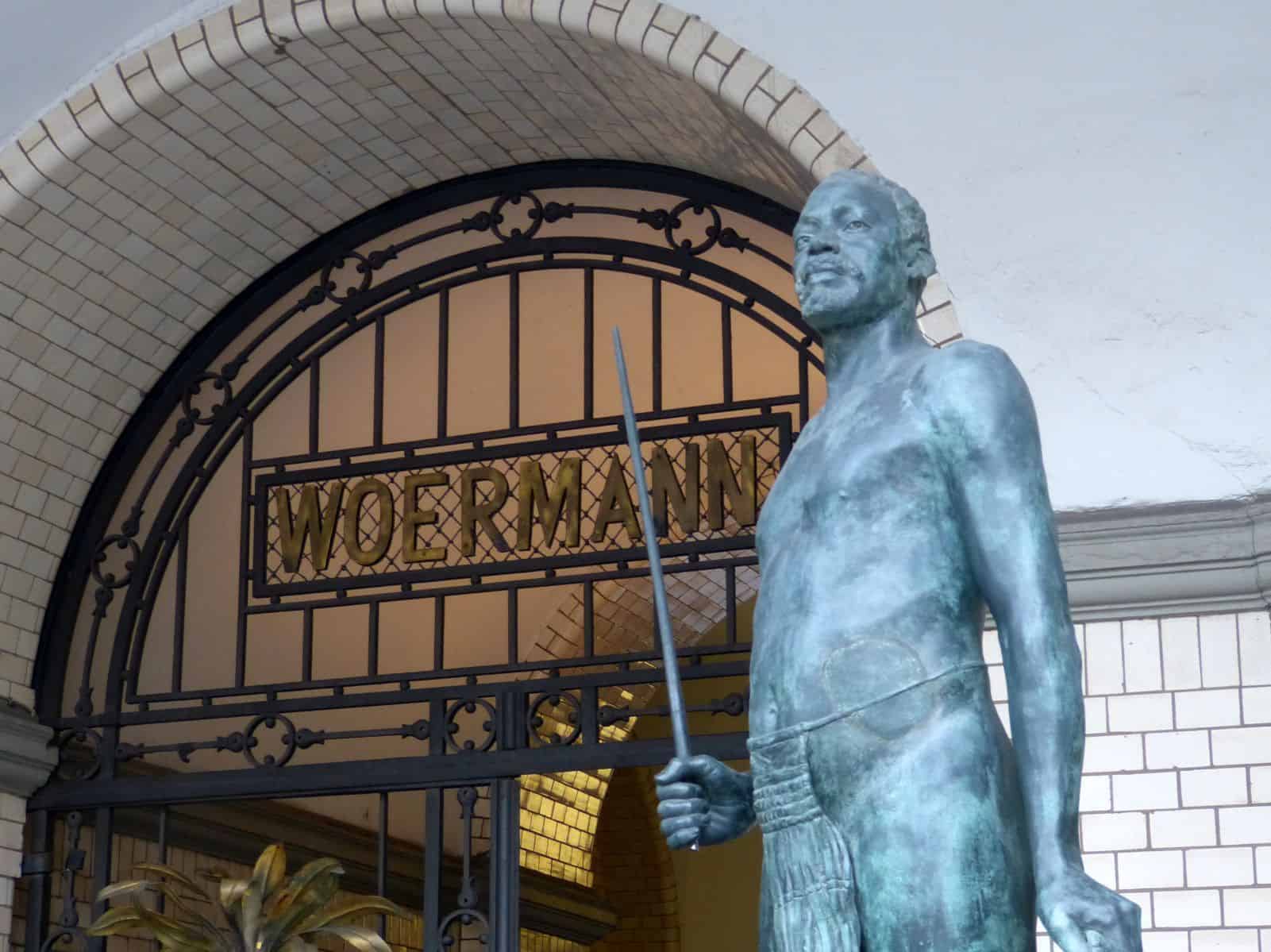 A Walk full of Discoveries

It’s no secret that there are many beautiful staircases in the Kontorhaus district. If you want to look at them, you should always remember that these are not museums, but houses where people go about their work. If a tour is tolerated, one should be careful as a visitor not to disturb the operation.

In addition to the very well-known flagships of the Kontorhausviertel, such as the Chilehaus, the Sprinkenhof or the Messberghof, there are numerous smaller houses that deserve a closer look inside or outside.

Wikingerhof (Viking House) (Schopenstehl 22)
Here it is best to look into the stairwell and discover an unusual, very beautiful wood paneling with numerous decorative elements.

Afrikahaus (Große Reichenstr. 27)
The figures in front of the house and in the courtyard testify to the history of the Woermann company and the German colonial period. Who is interested in the building history of the house, go to the right staircase, there hang pictures from earlier times and building plans.
Altstädter Hof (Altstädter Straße, Steinstraße, Mohlenhofstraße)
The figures on the facade represent professions. Sometimes more, sometimes less easy to recognize and one figure is even said to show the architect of this block. It is one of the few buildings in this area where there are apartments.