In every neighborhood and street of Hamburg, it looks different – the architecture in Hamburg is not consistently characterized by one architectural style. Why?
Hamburg was almost never a residential city. Our city, which has always served as a center of trade, was shaped by merchants rather than kings or bishops; therefore, there have never been uniform city conversions. Nor is Hamburg a classic industrial city: there was no leapfrog growth due to industrialization. Due to the fact that pragmatic merchants had the say, one mourned – in wars or city fires – destroyed not long behind, but built without further ado something new and reacted to new developments.
In addition: The today’s Hamburg exists in such a way only since 1937; e.g. Wandsbek and Altona – cities with own development and history – were incorporated only then.
Whole Hamburg is therefore a composition of extremely different milieus and architectural styles. Richly decorated, magnificent buildings, such as castles or churches, one looks but (exceptions confirm the rule!) mostly in vain.

Thomas is a very competent greeter who showed us the city of Hamburg with all its facets. We especially liked the fact that he is up to date on urban development and explained the Hafen City project...

With our competent and very friendly Greeter Hildegund, we took an informative walk from the Portuguese Quarter to the very charming Kontorhaus Quarter, through the New Town and parts of the Old...

Old and new architecture in Hamburg

Our greeter was completely attuned to our individual wishes and welcomed us punctually at the appointed time on the platform. Frank already gave us valuable tips for public transport and... 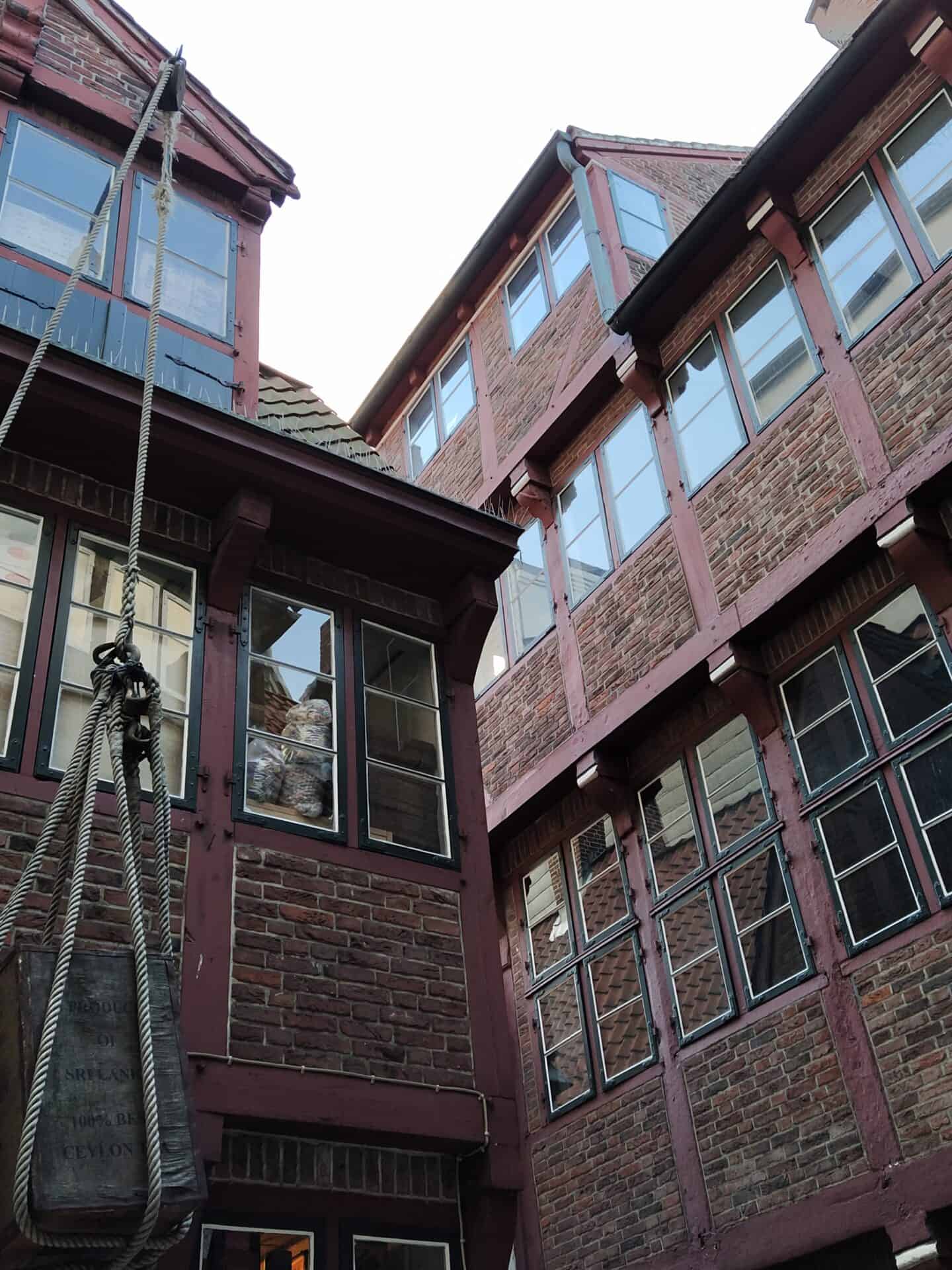 Once formative for Hamburg: Gängeviertel and narrow merchant houses
Hamburg grew steadily through immigration. Especially after the beginning of industrialization, the port became the main German transshipment point for goods from Great Britain. Most of the new citizens found themselves in poor corridor quarters, which once significantly shaped the cityscape. The residential and work houses of the merchants looked similar.
Today, the Gängeviertel and merchants’ houses seem somehow cute, downright charming! But one should not disregard how life was here once: Under more than questionable hygienic conditions, people had to live together in a very small space. Functioning water supply as well as disposal of garbage and dirty water did not exist!
Reason for the narrow cut and the narrowness was that as many buildings as possible should be connected to the street or the Fleete (channels). Also with the close building greed of the landlords played a role; mainly however simply: Lack of place. Only 1860 the gate barrier was abolished, the development area of the city was thus limited until then.
Due to a city fire, large-scale redevelopments as well as bombardments in 1943 only few Gängeviertel and commercial houses remained. One is conscious today however of the historical meaning of Gängeviertel at the Valentinskamp, historical dyke road as well as Krameramtsstuben – all count meanwhile almost to the standard inspection program. 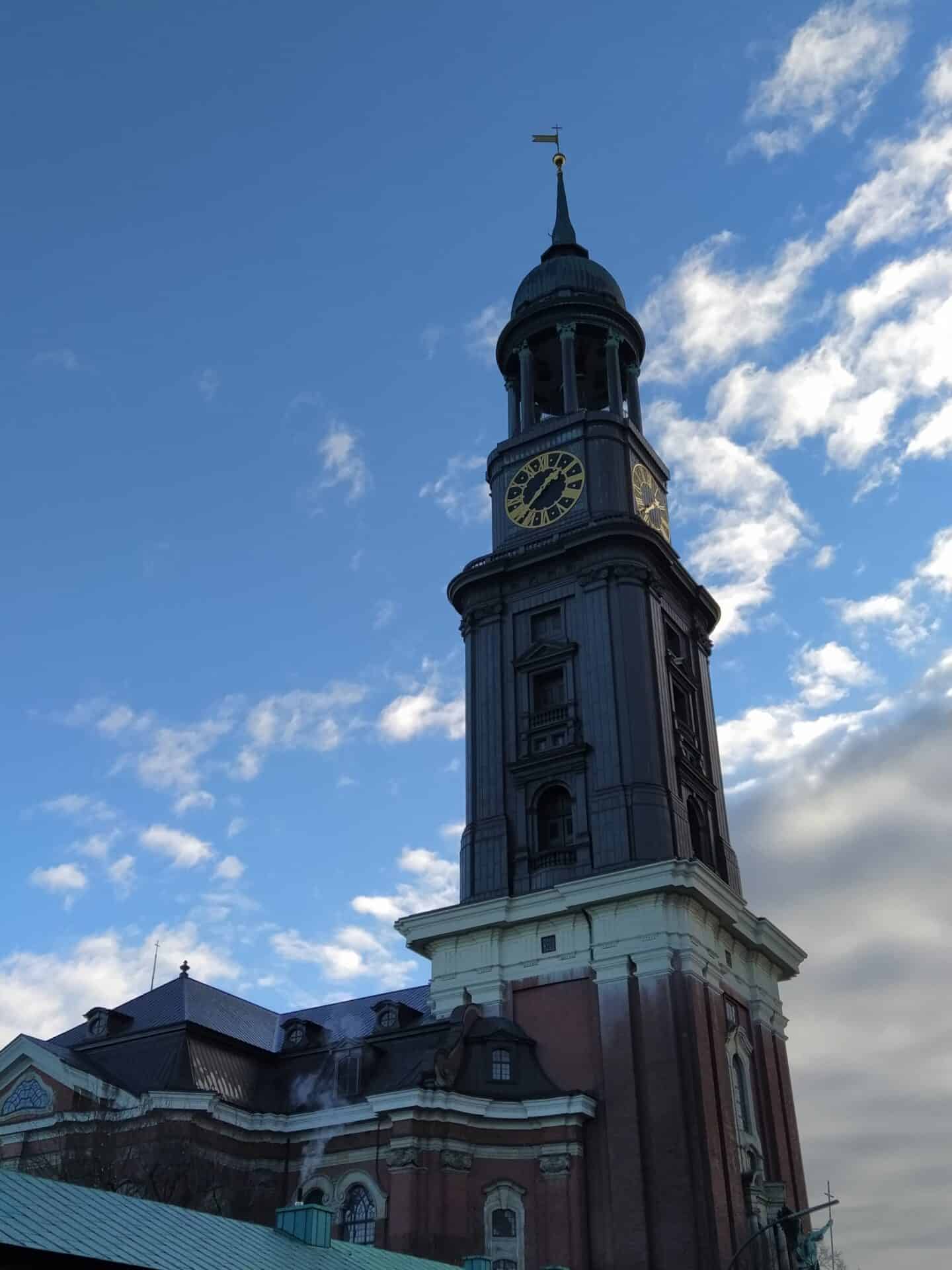 The main churches of Hamburg

Hamburg’s main churches Hamburg’s five main churches are usually far less magnificent than places of worship elsewhere. Nevertheless, it is worth taking a closer look! St. Peter’s Church (brick Gothic/Neo-Gothic) is the oldest of the five main churches. St. Jacob’s Church is characterized by Gothic secular architecture – with many transformations in the course of time! St. Katharinen (Gothic pseudo-basilica) lost a massive amount of its importance due to the construction of the Warehouse district, but is regaining some of it through the construction of HafenCity. St. Nikolai stands out among the main churches. Completely untypical for Hamburg, the neo-Gothic building has a very high tower and was built of yellow brick, sandstone and marble. The church exists only in parts, as it was largely destroyed during World War II and turned into a memorial. The reason for not rebuilding this church: The bombing had also destroyed the surrounding residential areas – there was simply a lack of potential churchgoers. The most famous and largest of the five main churches is undoubtedly St. Michael’s Church, or rather the tower, which we call Hamburg’s Michel. In the past, the church also served as a sea mark. But the biggest feature is the interior design: the church is the most important baroque church in northern Germany – despite the fact that construction began after the Reformation. 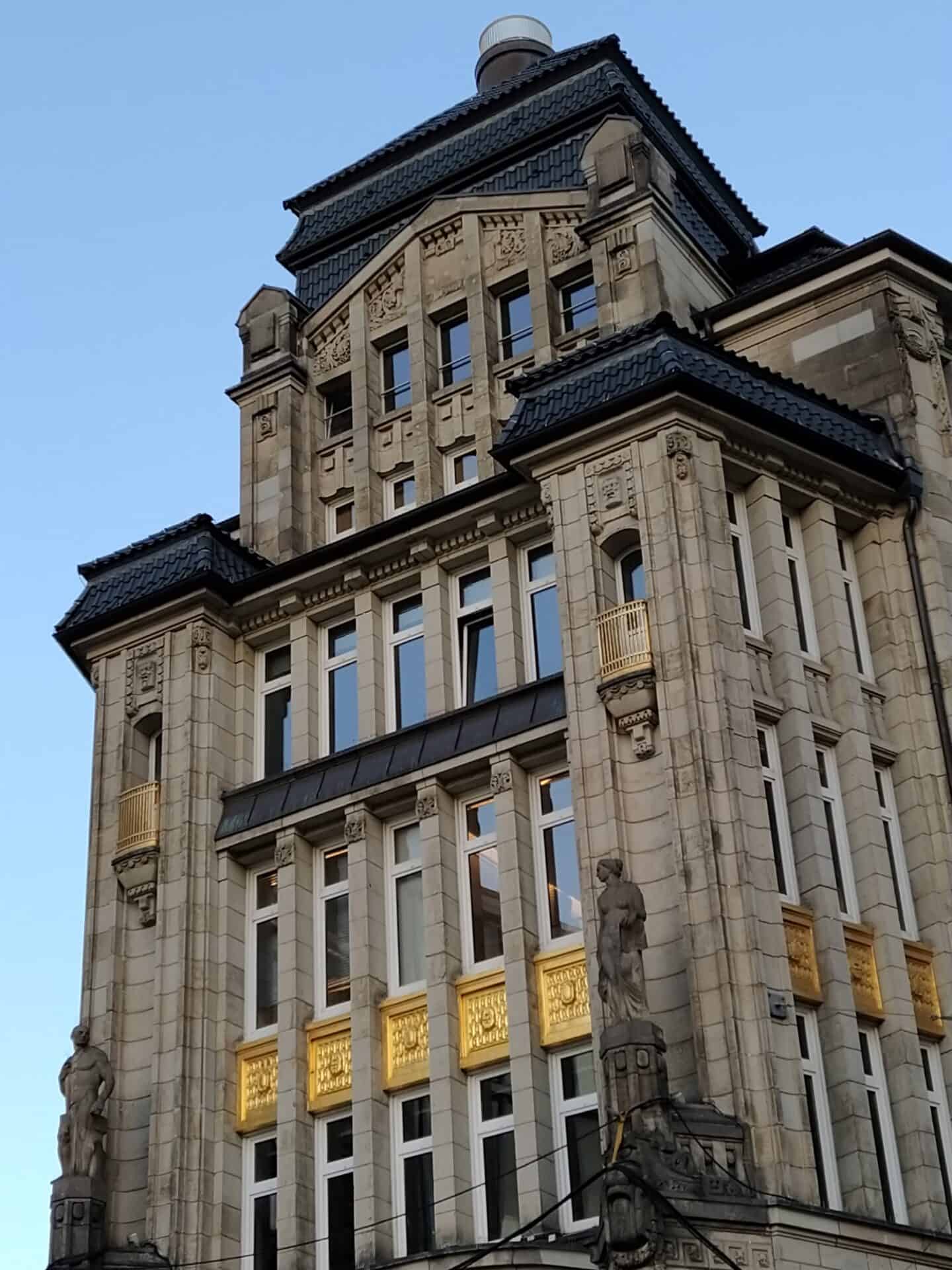 Interstadtumgestaltung und Warehouse district (Um 1900)
The inner city of Hamburg is predominantly characterized by commercial buildings, and less by residential buildings. This is nothing unusual, in Hamburg, however, this focus is particularly clearly implemented – and already from about 1900!
In 1842, there had been a devastating city fire, which destroyed more than a quarter of the city area; later, a cholera epidemic raged in the Gängevierteln. One decided to take both as a reason for an extensive transformation of the city center.
Today’s main shopping street Mönckebergstraße was literally broken through old building quarters – or their remains. Subsequently, this was built with commercial buildings (Kontorhäuser) in the style of the time. Of these, very many are still preserved or were rebuilt after 1945. Although the Hamburg merchants undoubtedly had a lot of money at their disposal, most of the buildings are rather to be judged as simple-elegant – quite in the sense of “Hanseatic restraint”.
A great feature of the city center is our town hall (in the style of neo-Gothic). Also in this period was built in the immediate vicinity of the city center the Warehouse district – at the time the most modern warehouse complex in the world and today rightly a UNESCO World Heritage Site! Despite the technical and economic purpose of the facility, much emphasis was placed here on design. 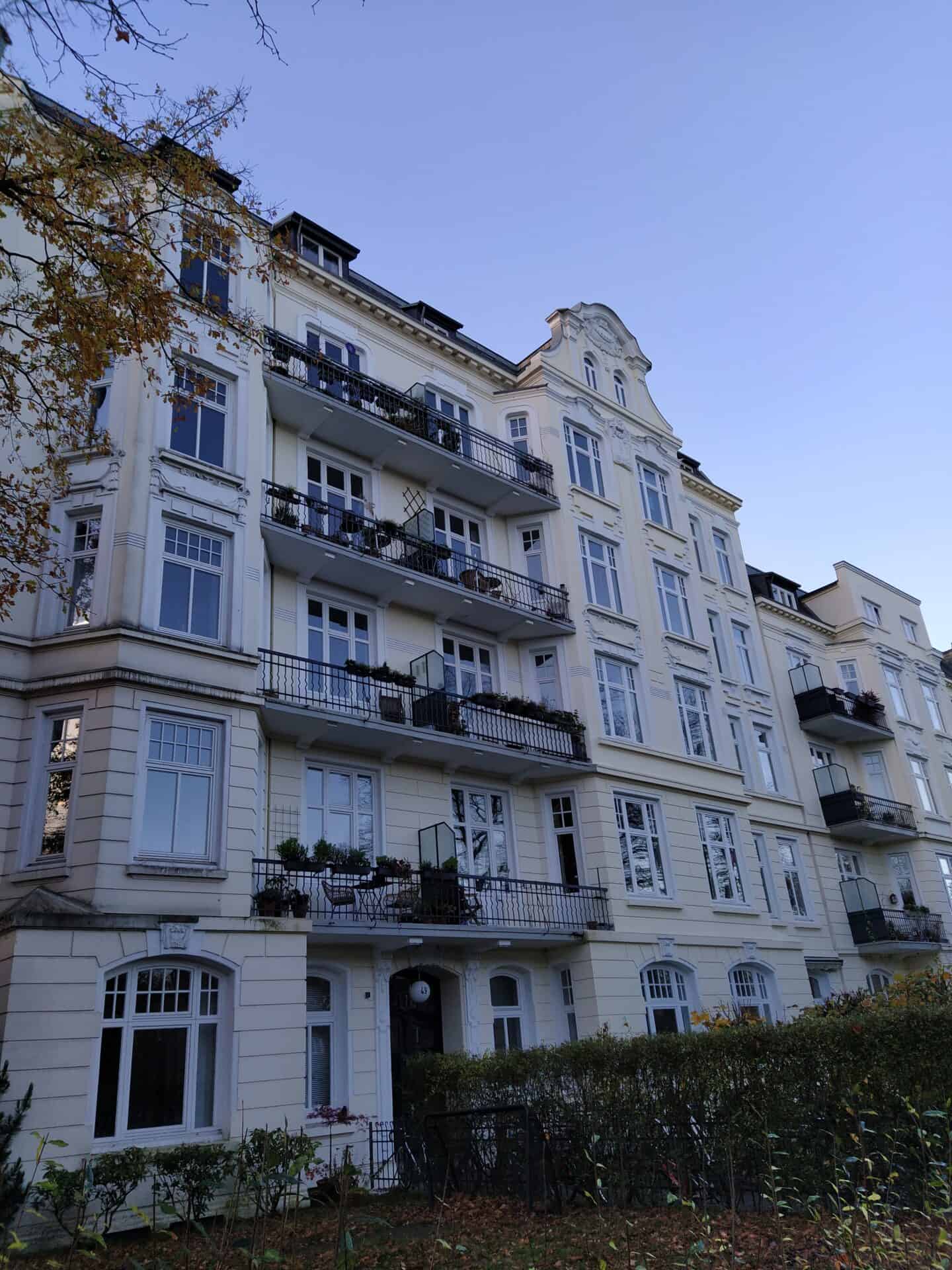 1850 until the beginning of the Second World War

In 1860, the gate barrier in Hamburg was lifted. Richer citizens took the opportunity to move to larger apartments in the suburbs. This gave rise to Wilhelminian quarters, most of which survived the Second World War – especially around the Outer Alster. The (upper) middle-class old buildings were usually built of brick, but the facade was kept in white with ornaments.
But more and more working-class neighborhoods were also created in the suburbs – the transformation of the city center and the construction of the Warehouse district required this. Although here, of course, the focus was on low-cost construction: New slum quarters like the Gängeviertel were not allowed to be built. From around 1910, the building director Fritz Schumacher put his stamp on the construction of housing for the “common people” (and also erected an extraordinary number of public buildings!). In addition to a focus on red brick – which is still characteristic of Hamburg – Schumacher emphasized appropriate apartment sizes. The buildings are still valued today as comparatively affordable alternatives to “classic” old buildings.
However, the (upper) middle-class apartment buildings and the working-class neighborhoods usually have in common the block-shaped structure with only one inner courtyard – the Berlin design with several backyards is rare. The inner courtyard served as a garden or recreational area – in the working-class neighborhoods before the Schumacher era for commerce. 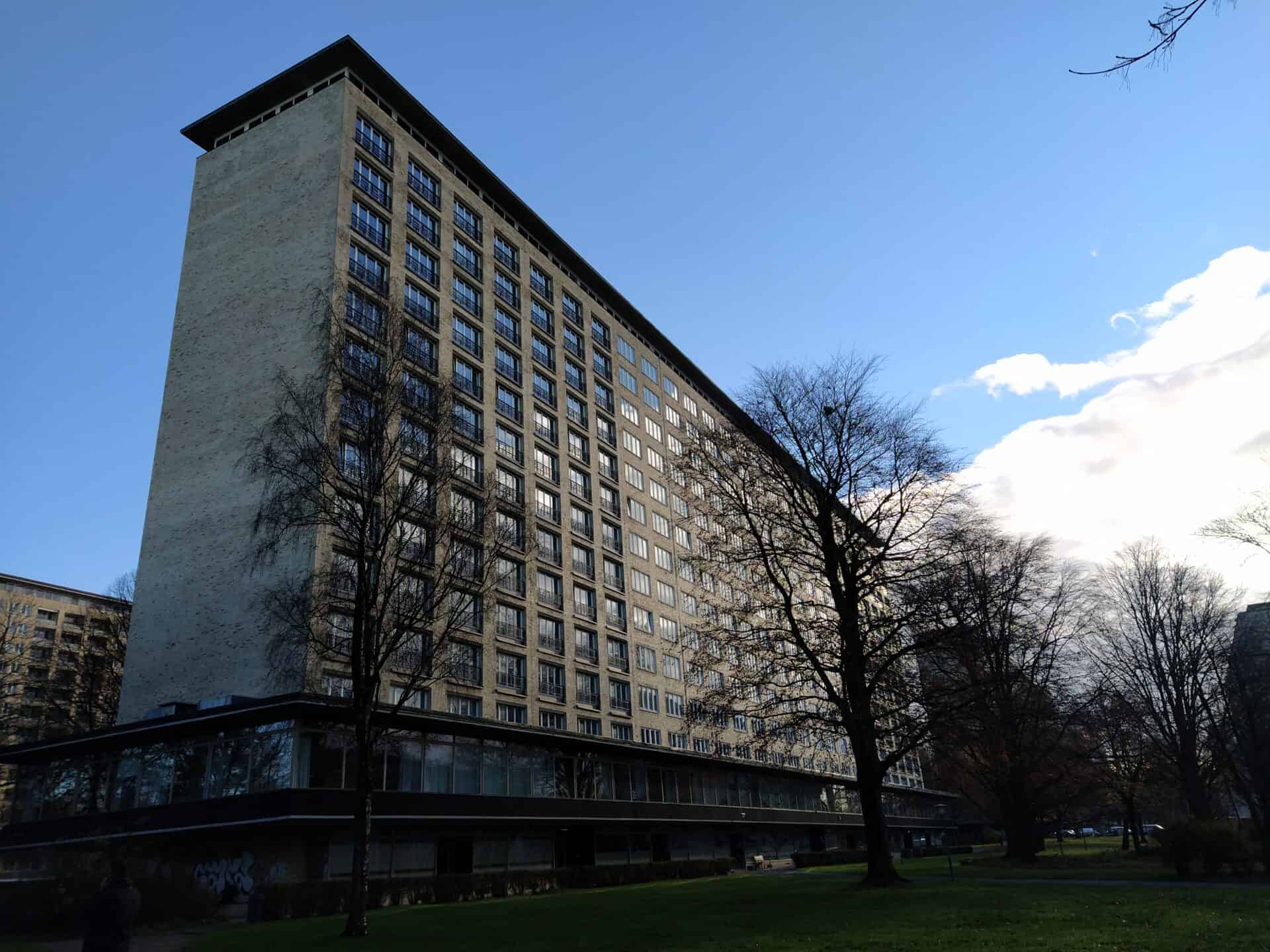 Postwar
Hamburg faced the problem of reconstruction after World War II. Destruction largely affected working-class neighborhoods and parts of the city center – rather than middle-class districts.
Unlike other cities, a faithful restoration of the cityscape rarely took place. On the contrary, some destroyed residential neighborhoods were cleared to become office districts (Neustadt) or reserve areas for commercial development (Hammerbrook). Instead, only a few distinctive, identity-forming buildings (e.g., the Michel) were reconstructed. Other buildings were rebuilt, but in the spirit of modernity (e.g., the State Opera House).
Space was again provided for new office buildings in the city center, and fewer apartments were built on the same area than before. In addition, many new Hamburgers from the “eastern territories” had to be accommodated: Large new housing developments were built in previously rural districts – mostly the typical row houses of the 1950s (“garden city idea”), but also the first high-rise residential buildings (Grindel high-rises) as well as the first ever office city (City Nord) in Germany! Later followed large housing estates.
Overall, Hamburg changed its face significantly and the populated urban area exploded. Even if some would like to build many things from this time again: Just the diversity thus created also makes the charm of Hamburg! 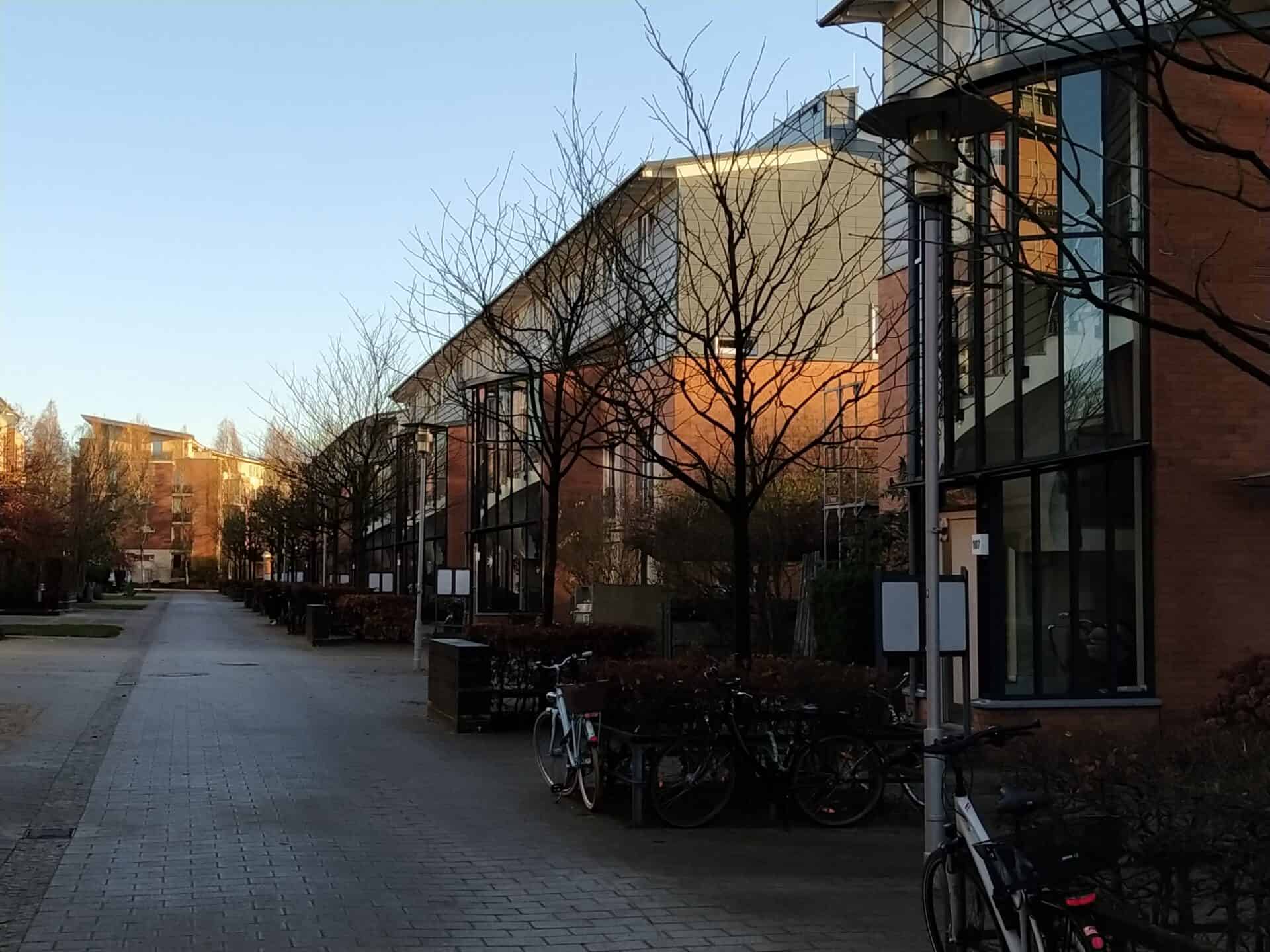 From the 1990s onward, the new political situation led to a lively influx of people to Hamburg. In addition to the increase in demand for housing, however – due to demilitarization and structural change – opportunities arose to redevelop areas that were no longer in use (e.g. HafenCity). The residential areas from that time again bear an astonishing resemblance to those from the turn of the century! The architecture of the office buildings and the public buildings became more “international” – much was kept in steel and glass, for example the northern bank of the Elbe in Altona (“Perlenkette”), the Berliner Bogen or the western part of HafenCity. However, this was often criticized and in the course of time a building style was created that represents a symbiosis of traditional Hamburg building style and modern elements. By far the most famous example of this is the Elbphilharmonie! Due to the current high demand for new housing, a tendency towards “construction on the assembly line” can be observed lately. Nonetheless: Most new development districts and projects have been successful. Today, renowned architectural firms are based or have their roots in Hamburg (e.g. gmp Gerkan, Marg & Partner or BRT – Bothe Richter Teherani) and continue to help shape the city.