Tour of St. Georg with the Hamburg Greeters 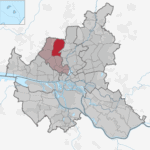 Our two Hamburg Greeterinnen Marie-Luise and Karin are completely in love with St. Georg, each in her own way. Why this is so quickly becomes clear on a tour of St. Georg, which offers diversity, secret corners, culinary experiences, traditional arts and crafts and a lively district in a very small area. Join them on a tour of St. Georg, the lively trendy district between the Alster lake and the main train station.

St. Georg, the Lange Reihe and the Alster beach

My friend Christine had never been to Hamburg before, and I had been there dozens of times, but only on business. It was high time we took a look at Germany's second largest city.... On the first...

Great variety in the smallest space 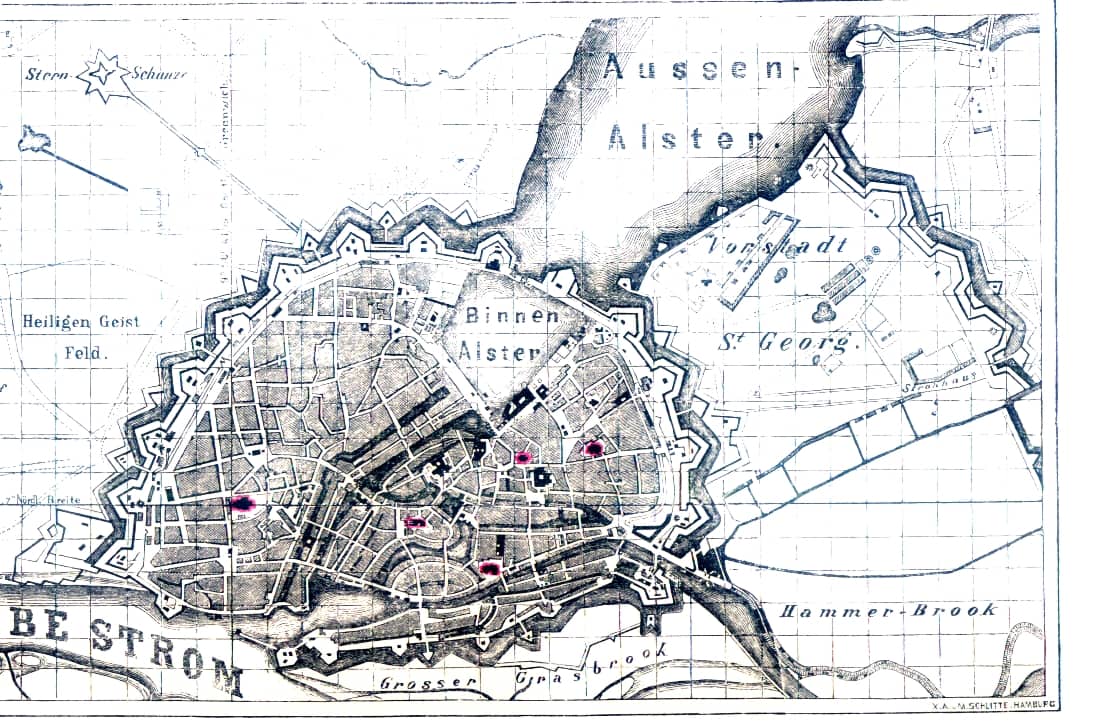 In the more than 800 years of its history, St. Georg has transformed itself from the site of a leper asylum into a trendy district with cultural diversity. With 11,000 inhabitants, this rather small district of Hamburg was named after the knight St. George, the patron saint of the sick. He can be found everywhere in the district, in the garden and on the tower of the Dreieinigkeitskirche (Church of the Holy Trinity) or on the only Kontorhaus (office building) in St. Georg. A pharmacy on Lange Reihe is named after him, as is the district newspaper ‘The Laughing Dragon’. For a long time, everything that was not wanted within the city was located here, such as the gallows, the witch burning place, the tan and powder mill and the plague cemetery. None of this can be seen today. Only after the Great Fire broke out in Hamburg in 1842 was the area used to house the homeless. But not only that, the wealthy people of Hamburg discovered the meadows along the Alster as excellent locations for their summer homes. As industrialization took its course, the main train station was built and with it came the hotels and theaters to the district. But later also the drug scene and prostitution. In the 1960s, St. Georg was so run-down that all the houses except for the two churches were to be torn down and the so-called Alster-Manhattan was to be built. Residential towers with 62 stories right up to the Alster, with underground pedestrian conveyor belts all the way into the city. The fact that it didn’t come to that is solely thanks to the bankruptcy of Neue Heimat, because the permit already existed. St. Georg was then redeveloped and is now a multicultural and cosmopolitan neighborhood with many stores, restaurants and cafés. 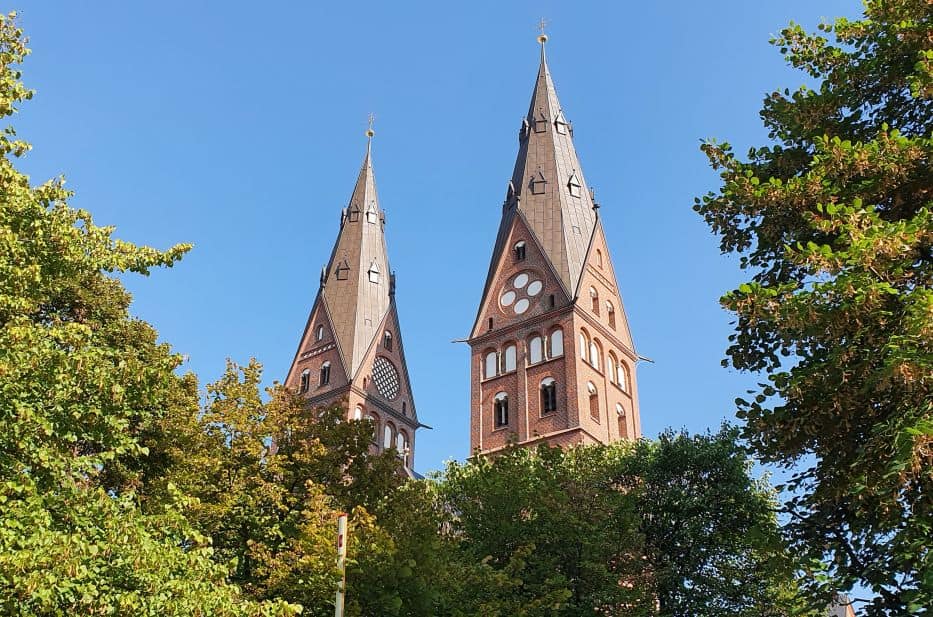 The Protestant Church of the Holy Trinity is the oldest here and also reminds in details a little of the St. Michaeliskirche. If you’re lucky, it’s open and you can admire one of the oldest works of art in Hamburg, a well-preserved crucifixion group from 1450. The church has long been closely associated with AIDS-Hilfe, which has to do with the many homosexual residents. It is also engaged in an exemplary way for the homeless and thus represents an important institution. Around the church much can be discovered, so for example Freddy Mercury is immortalized here or the place of residence of the boxer Max Schmeling can be found.

Hamburg also has a Catholic cathedral, the Mariendom, and not as usual in the city center, but in St. George. With its twin towers, it looks very similar to Bremen Cathedral. However, it is not really old, because since the Reformation, no Catholic churches were allowed to be built in Hamburg for a long time. It was not until 1893 that the time had come. Right next door is Pope John Paul II, who was responsible for Hamburg being an archdiocese today. The parish is a focal point for the Catholic population from the surrounding area, and there are even church services in Portuguese and Croatian. Not to be missed is a visit to the columbarium, a wonderful place of silence.

Very close to the Steindamm amidst many small Turkish stores there are a handful of mosques, of which the large Centrum Mosque is very impressive. It was only built in 1977 from former public swimming pool “Hammoniabad”. Two minarets with green and white hexagons adorn it, a work of art by Boran Burchardt. You can visit it if you ask the gatekeeper. Otherwise, a tea in the attached restaurant is also worthwhile. 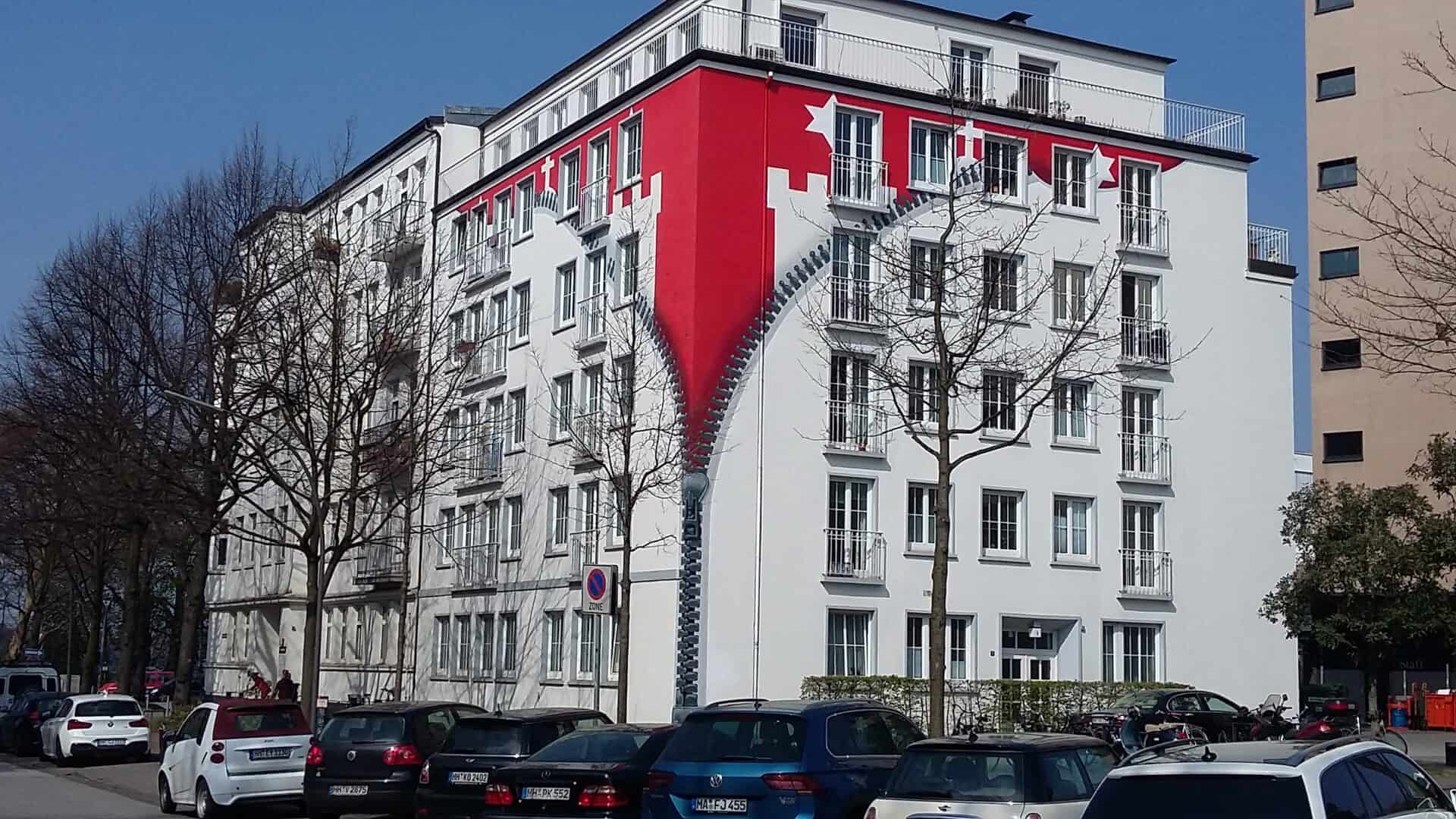 From Central Station to the Alster

We start at the Deutsches Schauspielhaus, with 1,200 seats one of the largest German spoken theater. Opened in September 1900, it was the most modern theater in the German-speaking world by the technical standards of the time. And constructed along the lines of the Volkstheater in Vienna. In 2013 it was renovated from top to bottom including the old ceiling painting in the auditorium. If you are hungry, the ‘canteen’ located in the basement, which was originally intended for the actors, is recommended.

Almost next door is the hotel ‘Reichshof’. Emil Langer opened it in 1910 in honor of Kaiser Wilhelm II shortly after the main station was completed. A look inside is worthwhile: the ‘Bar 1910’ in Art Deco style, the reception hall with Italian marble columns and the restaurant are absolutely worth seeing.

Further in the direction of the Alster we meet the 5-star superior hotel ,Atlantic’. It was opened after the plans of the architects F. Wellermann and P. Fröhlich 1909. The shipowner Albert Ballin was involved in the development in order to create suitable accommodation for the 1st class passengers of Hapag. With up to 1,200 possible guests, Udo Lindenberg has been considered the most prominent permanent guest since 1995. The restaurant and a gallery are hung with his so-called ‘liqueur paintings’. The hotel has received further notoriety from the James Bond film ‘The Morning Never Dies’, which was shot here.

From here it is only a jump to the Außenalster. There you have a beautiful view over the water with passenger ships, sailboats and rowboats and can also turn in nice cafes and watch the hustle and bustle. 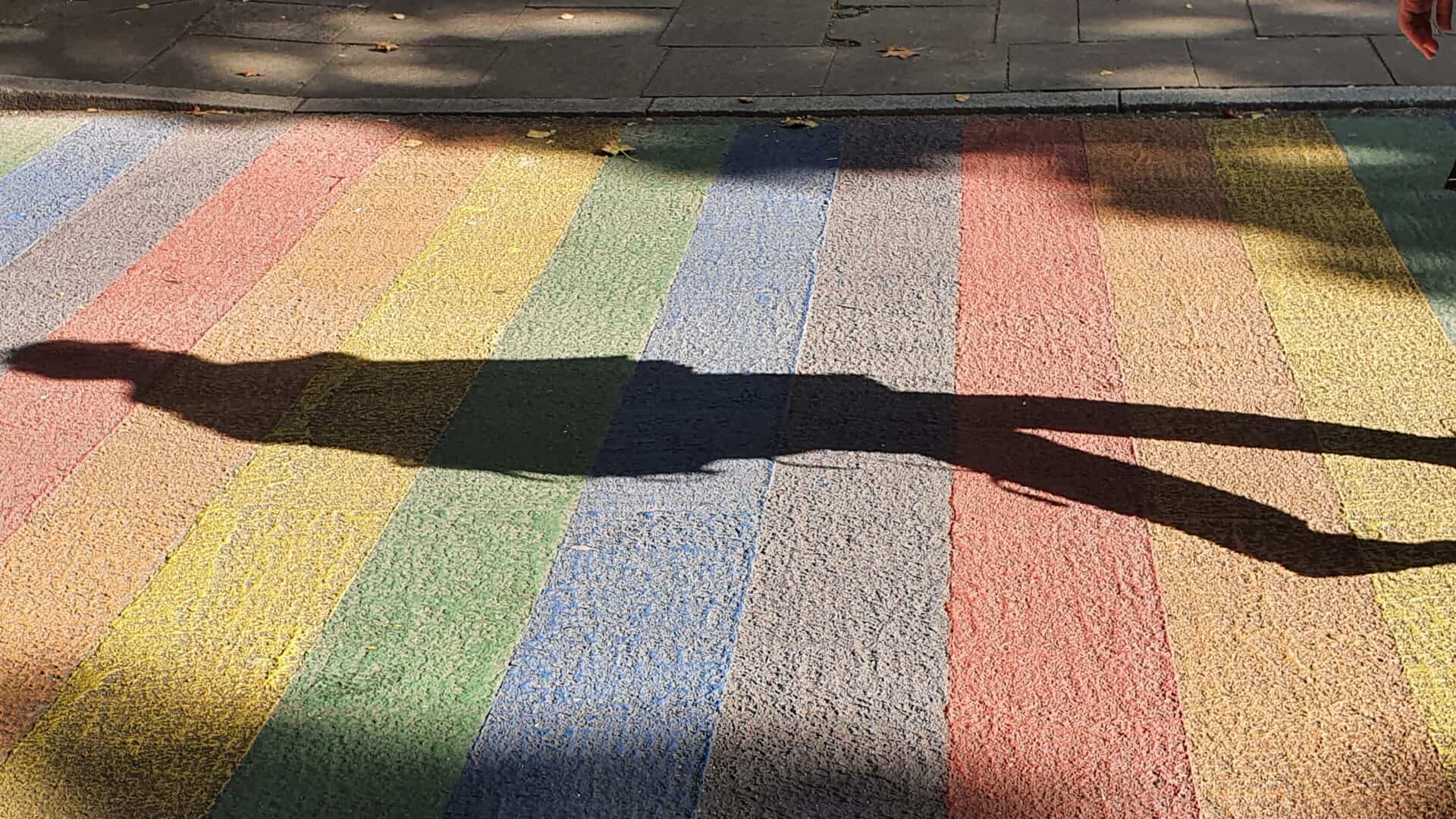 A few steps from the main station we reach Hansaplatz with the Hansa fountain from 1878, decorated on top by the Hansa, an allegory of the strength and power of the Hanseatic League. After the destruction of some surrounding apartment buildings in WW2, the square was populated by drug dealers, the drinking scene and prostitutes. Since then, the square has been thoroughly redeveloped and is now home to numerous cafes and restaurants. Along the Steindamm, one of the oldest and most lively streets in the district, we come across the variété theater ‘Hansa-Theater’, the Savoy cinema with its red plush armchairs and, opposite, the ‘Politt-Büro’ (cabaret). All this in the midst of a colorful hustle and bustle and predominantly oriental stores for the predominantly Turkish population living here. In the ‘Lindenbasar’ you dive into a completely different world with a great presentation and a huge spice and nut selection. And if you like it sweet, you should definitely try the bakhlava at Oriental Sweets very close by. The second important street in St. George is the 730-meter-long Lange Reihe with a collection of restaurants, bars, cafes, boutiques and small stores. Between the oldest half-timbered house in the city, the birthplace of Hans Albers and the home of the poet Hans Leip, you can find here In the warm season, numerous tables and chairs in front of the pubs on the sidewalks. Recommended here is the old coffee house ‘Café Gnosa, since 1939, with delicious cakes from the in-house pastry shop and meeting place of the gay scene and numerous tourists. For shopping, there is the ‘Koppel 66’, a former machine factory that has been converted into an artisan house. Here, in addition to a café, there are open studios of 18 artists and craftsmen in 12 studios on 3 floors.