Tour of the Port of Hamburg

The port is a highlight not only for tourists, but also for many Hamburg residents. The Elbe, Fleete, harbor basins, ships of all sizes, cranes, terminals and much more inspire again and again. A Greet at the port is a guided tour of a special kind.
For centuries, Hamburg has been Germany’s largest seaport and thus its gateway to the world. In Europe, it ranks third after Rotterdam and Antwerp. After Duisburg, it is also the second largest inland port in Germany. Without the port, Hamburg’s rise to become a major global trading city would not have been possible. Just about every cell phone or piece of clothing purchased in Germany has come into the country by container ship. 75% of all bananas eaten in Germany have been imported via the Port of Hamburg. Three-quarters of the green coffee imported into Germany is also landed at the Hamburg port.
The port is to thank for Hamburg’s transformation from a pure trading city to Germany’s largest industrial location, because the short route from the port to the factory eliminates expensive land transport.
Talking about cheap sea transport: the shipping costs of a cell phone from China to Hamburg amount to about one eurocent.

Five of us went on a great tour with our two greeters Silke and Ulli from our hotel in St. Pauli across the harbour and through the Warehouse district. The two of them took a lot of time for us and...

A great experience – Hamburg and its port

We had a great time cycling with our Greeter Thomas. He gave us great tips on renting city bikes and lots of insider information about the port of Hamburg. It was a very nice cycling trip across...

Through the Old Elbe Tunnel into the Port of Hamburg

Our greeter Peter met us on time at the agreed meeting point. We had already received the first tip to park free of charge near the harbour. By bike we explored Hamburg's Hafencity, the Warehouse...

Totally personal voyage of discovery with the Hamburg Greeters 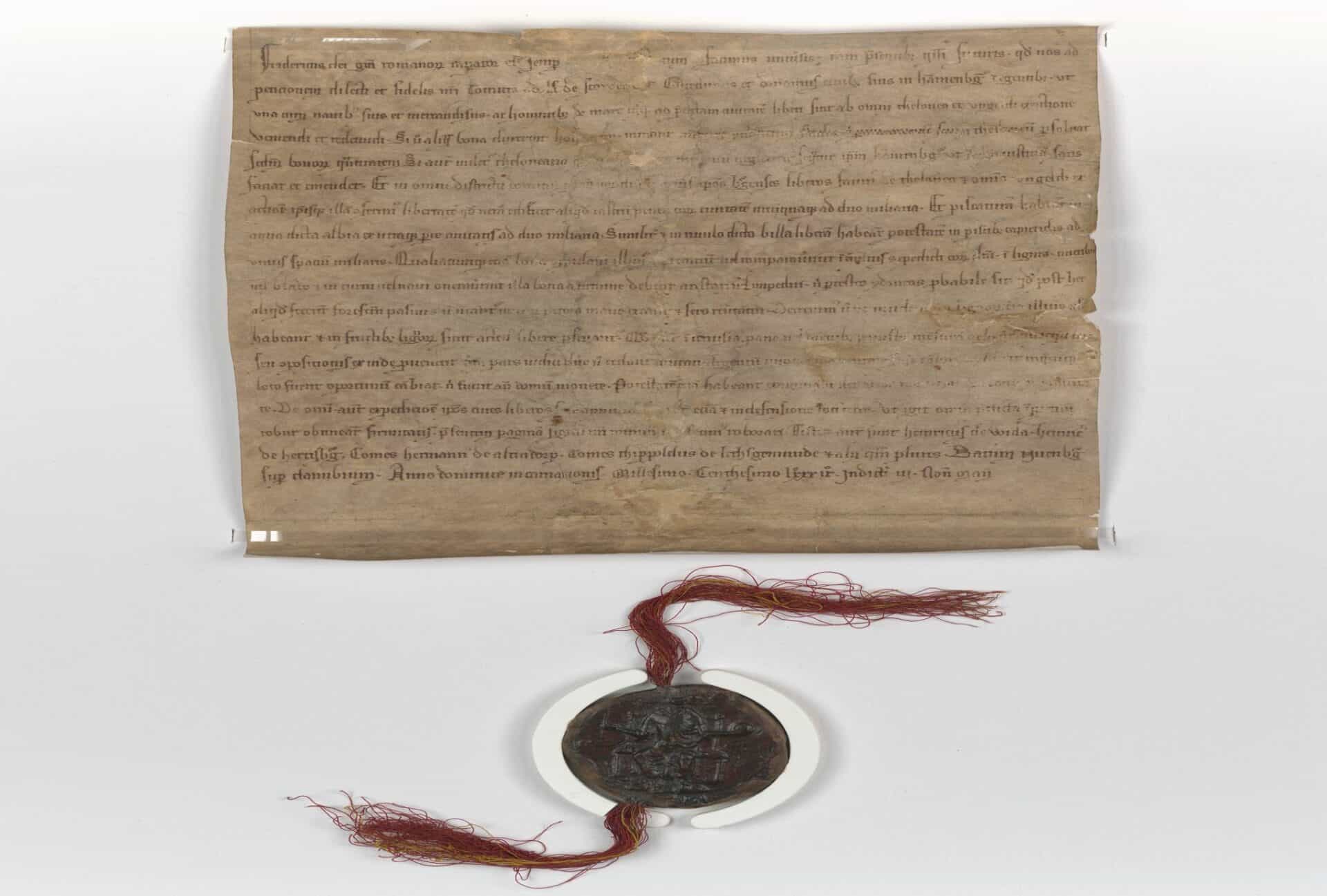 The first port of Hamburg was not located on the Elbe River, but at the confluence of the Alster and Bille rivers, two tributaries of the Elbe. The settlement there was called “Hammaburg”.

When exactly Hamburg was founded is not known to this day. We therefore do not celebrate a city anniversary, but the “Hafengeburtstag”: always on May 7 (because of Corona unfortunately not in 2020 and 2021). The basis is a document, dated May 7, 1189 in Neuburg on the Danube.

In it, Emperor Frederick Barbarossa assures the Hamburgers, represented by their then sovereign Count Adolf III of Schauenburg and Holstein, several privileges in a “charter”, such as freedom of customs on the Elbe down to the North Sea. No castles were allowed to be built within a radius of 2 miles (about 15 kilometers), fishing rights in the Elbe were assured and so-called “stacking rights” were granted. And the people of Hamburg were exempted from military service for the emperor.

The only stupid thing about it was that the document got lost by the count on his way back from the meeting with the emperor. But of course, the people of Hamburg believed the information of their sovereign … but to be on the safe side, they allegedly issued the charter to themselves again about 60 years later. It is possible that some of the privileges were accidentally added to the document. Who wants to prove the opposite?

Why was this so important? Between the mouth of the Elbe in the North Sea and the port of Hamburg lies the city of Stade. Stade of course also had a port at that time and in 1259(!!!) received the so important “Stapelrecht” from the archbishop of Bremen.

This allowed Stade to intercept all ships sailing on the Elbe. The captains had to unload their ships and offer them for sale “stacked up” in the port of Stade (the “stacking right” so important for a port at that time). In addition, Stade was allowed to demand customs – everything that Hamburg also wanted and with which it got the “right” through the forged and pre-dated(!) deed. Without this well-organized document forgery, not only the “Lion King” would probably sound his roar today in the “Hanseatic City of Stade” …

For the port of Hamburg, of course, this was threatening its existence. So we celebrate the port’s birthday because of a forged document, which is kept in the Hamburg state archives … 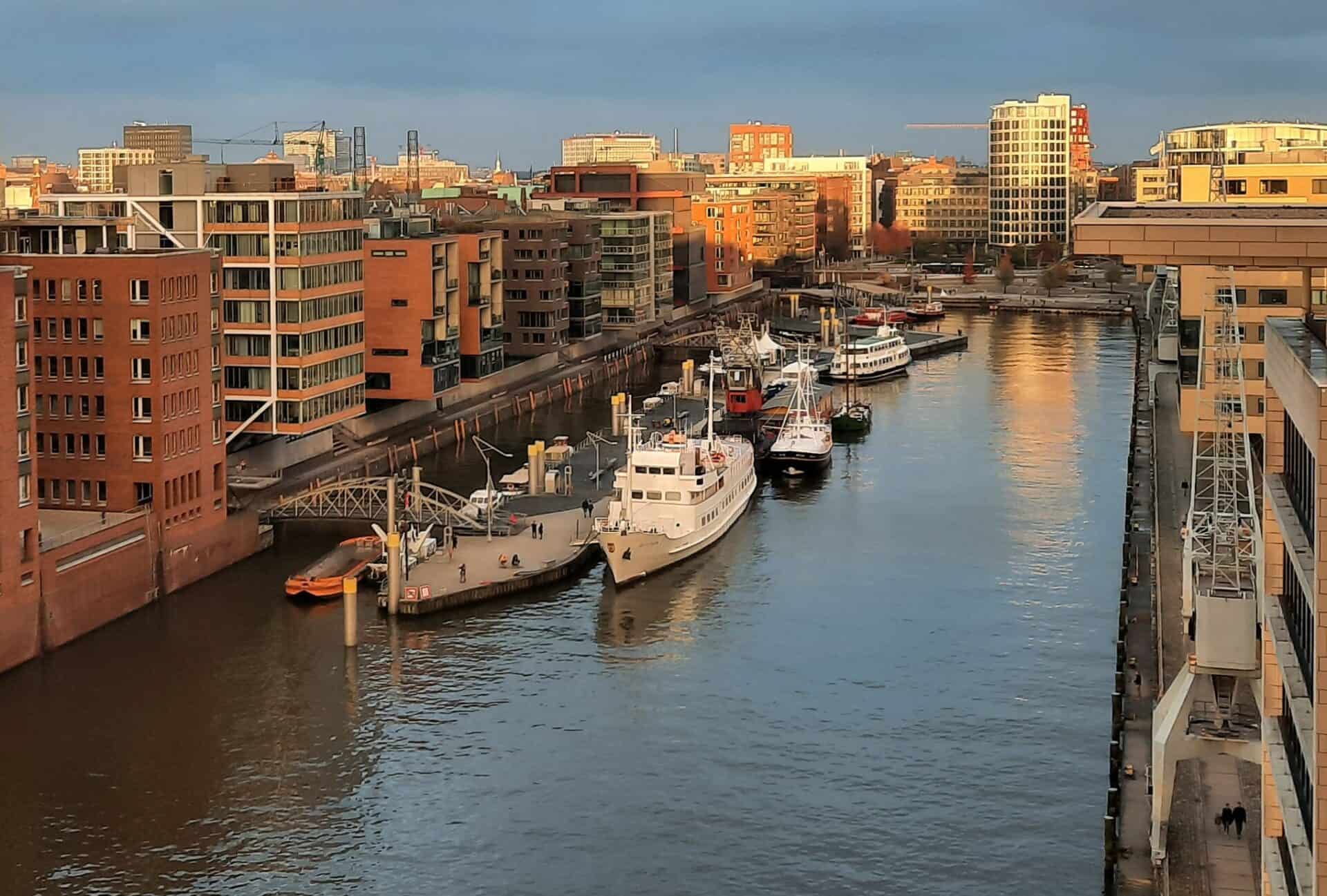 From sailing ship to steamship

The larger the sailing ships became, the more the port shifted towards the Elbe. While the Hanseatic League, as a powerful association of cities, was initially more focused on the Baltic Sea and Lübeck was the most important Hanseatic city, trade across the North Sea, especially to Bergen, London and Bruges, became increasingly important, and especially with the discovery of America, overseas trade.

Tightly packed, the sailing ships lay at anchor or at duckdalben where the inland port is located, and in the Elbe between Elbphilharmonie and Baumwall subway station. They were unloaded with their own loading gear into small barges, which then brought the goods ashore. There, cranes were used to unload the barges. A crane from this time still stands at the customs canal there, where the Nikolaifleet enters.

As more and more steamships competed with sailing ships in the 19th century and these ships could also take on more cargo, five harbor basins were built in the area of today’s HafenCity. The first proper quay harbor was Sandtorhafen, completed in 1866. Large cranes now unloaded the ships, which moored directly at the quay.

At the quay there were rail and road connections for onward transport and sheds for storing the goods. Until the eighties of the twentieth century, the Sandtorhafen was still used, until it had become too small for most ships. Now it has become a museum port.

The sheds and railroad tracks are gone, the old quay walls and some restored cranes are preserved. Sights worth seeing include the “Seute Deern,” a passenger ship that used to sail from Cuxhaven to Helgoland, and a former floating crane that now houses Hamburg’s smallest hotel. From the Elbphilharmonie you have a good view of this harbor basin. 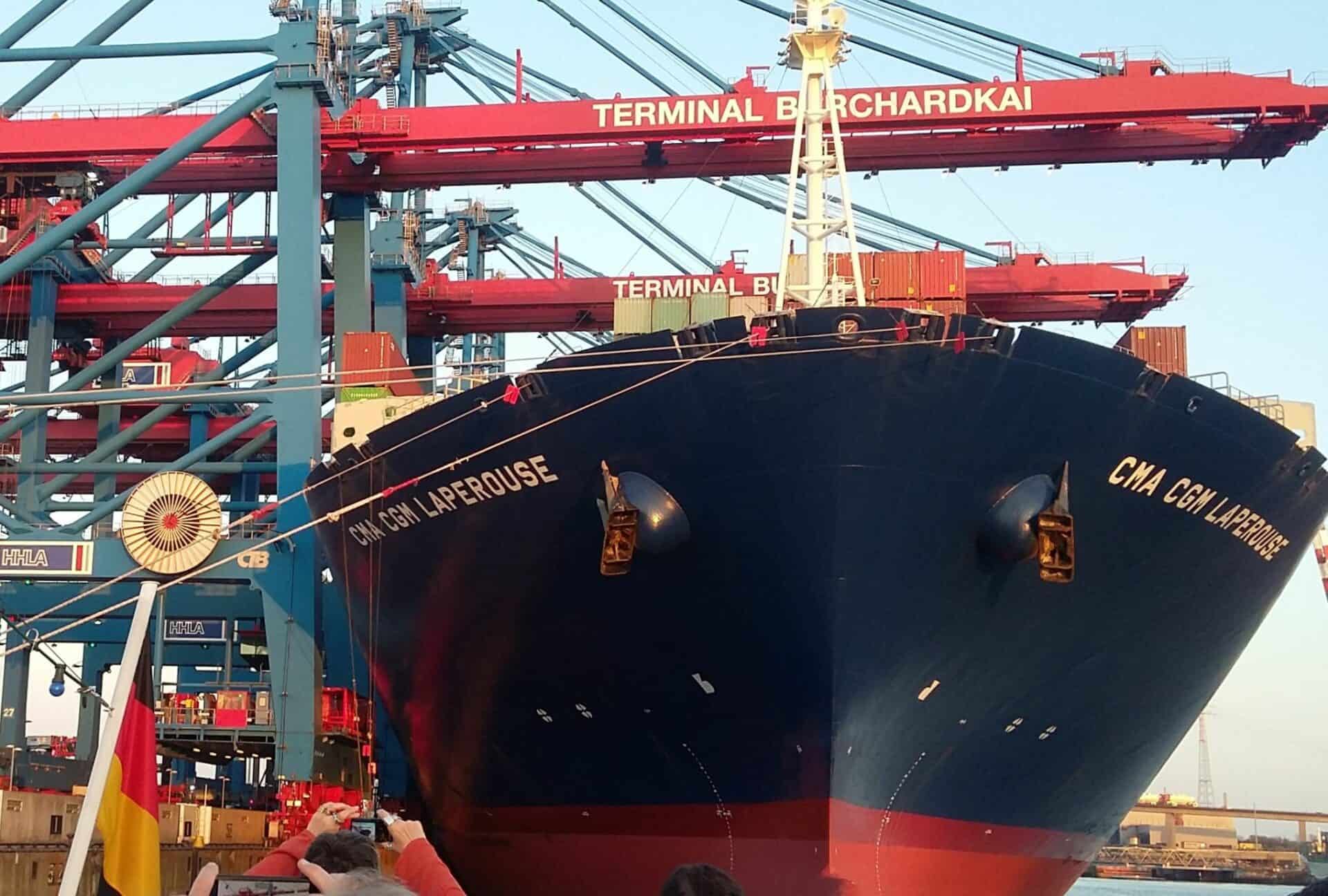 On a par with the big boats

You can discover the harbor on foot or by bike on land and even more so by boat on the water. In addition to the old harbor basins in the HafenCity area, the Warehouse district (link) is a must.

Further down the Elbe follows the City-Sportboothafen with sailing and motor yachts of all kinds. To turn in there is also the old English lightship LV13. Further it goes past the Landungsbrücken (Link) and the St. Pauli fish market (Link) to the Elbwanderweg (Link).

Exploring the harbor by boat takes you even closer to the many different ships and port facilities. For the Warehouse district, which is illuminated at night, a launch trip at dark is a good idea. Line 72 of the HADAG runs from the Elbphilharmonie to the Landungsbrücken. From Landungsbrücken, line 62 travels to Finkenwerder, and from there you can take line 64 to Teufelsbrück.

All ferries of the HADAG are to be used with the tickets of the HVV! On these ferry trips, you pass harbor basins with huge container ships, museum harbors, the berths of the harbor tugs, the “old Sweden” (a 218-ton boulder from the Ice Age), the Nautical Headquarters, the pilot station and the Elbe beaches. Numerous villas can be seen on the northern slope of the Elbe.

A very special encounter occasionally occurs on the Elbe near Finkenwerder. There is the factory airport of Airbus. Coming from the northeast, one or two “Belugas,” the world’s largest transport aircraft, land daily from Toulouse. In the cargo hold are French aircraft parts of the Airbus A318, A319, A321 series and also parts of the A320, which are final assembled in Hamburg and delivered to customers.

However, if a large container ship is about to pass through the entry lane, an accident could occur. In fact, the ships have priority and the planes then have to take off through. 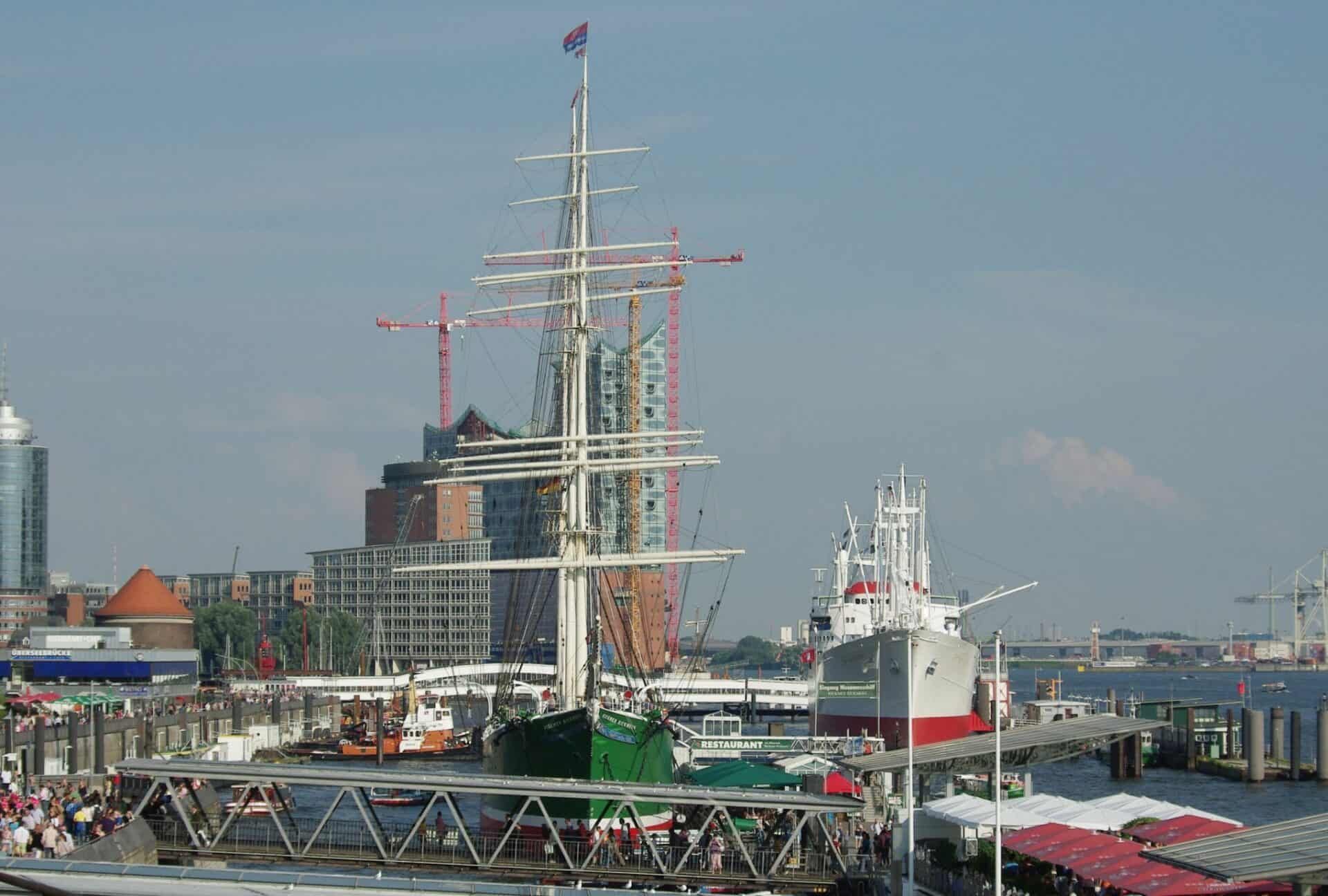 Not only in the Sandtorhafen at the Elbphilharmonie there are numerous museum ships to discover: