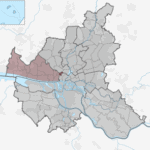 The Schanzenviertel, affectionately also called Schanze is the smallest district of Hamburg, belongs to the district Altona and is officially called Sternschanze.
The “Schanze” is a very popular neighborhood and a colorful multicultural scene district. A Greet – the guidance of the special kind – shows traditional and trendy stores, a variety of gastronomic offers and cultural institutions.

We were out and about in the Schanzenviertel with Dieter and were thrilled to get so much information. On my next visit, I will walk the paths again, especially I am happy about the sneaky paths I...

From workers’ quarter to trendy district 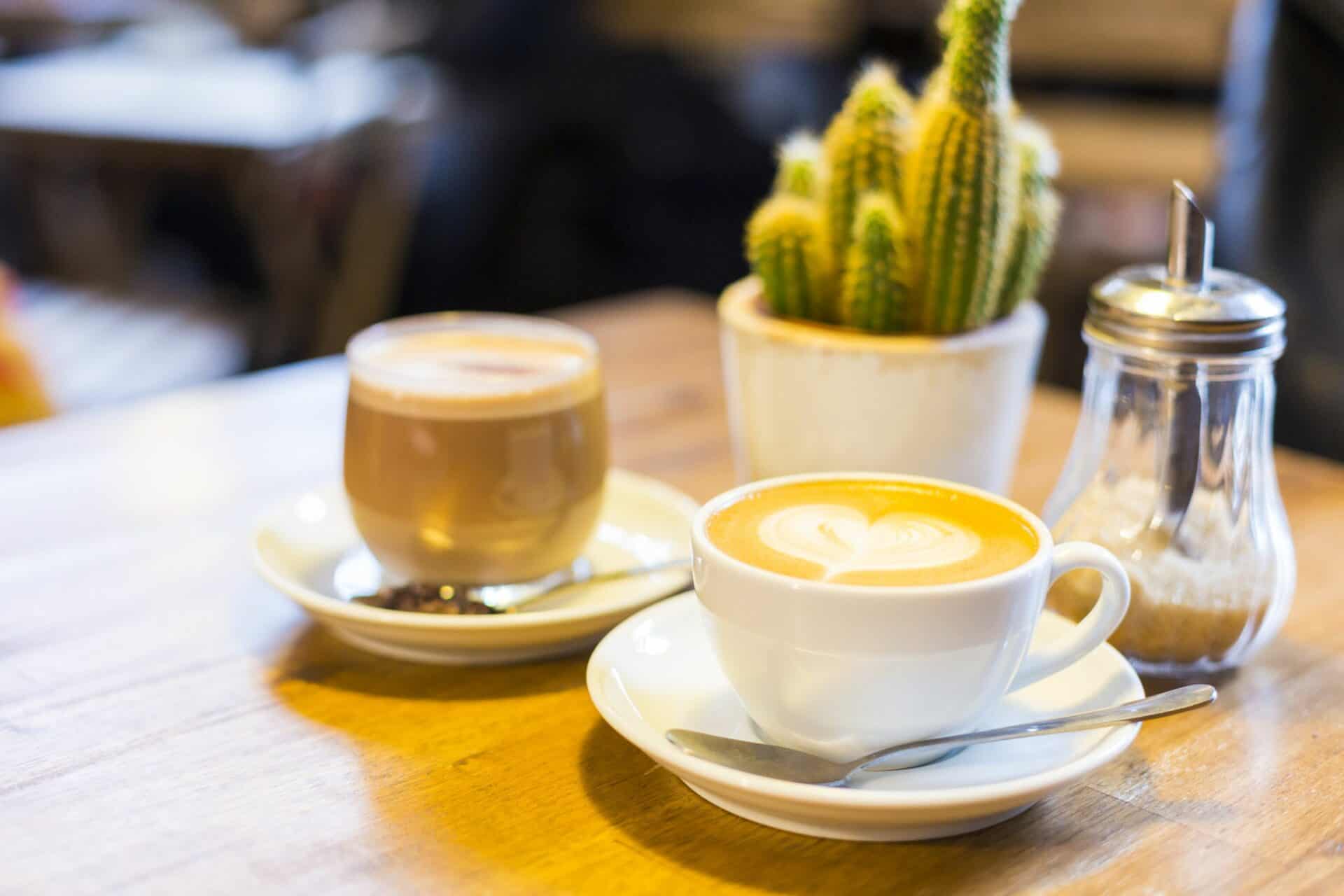 The Schanze, formerly Germany’s largest redevelopment area, is today affected by rapid gentrification.
Until the 80-ies, the Schanze was a neighborhood with houses in need of renovation, dirt and neglect.
The transformation of the neighborhood began with the influx of students and artists.
At the same time, the extensive redevelopment projects began.
In the 90-ies, small start-ups moved into renovated former factory buildings and the Schanze became a cult neighborhood for the creative scene….
The neighborhood became hipper and more expensive for Hamburgers and tourists.
Today we have a counterpart of spruced up old buildings and others with graffiti-oversäen
walls and crumbling facades, a juxtaposition of kiosks and chic cafes.
This is what makes the Schanze so attractive to outsiders, but for the long-established becomes a problem.
Still you can find long-established traditional stores and small trendy design stores, but due to the rising rents, the displacement process is progressing rapidly. 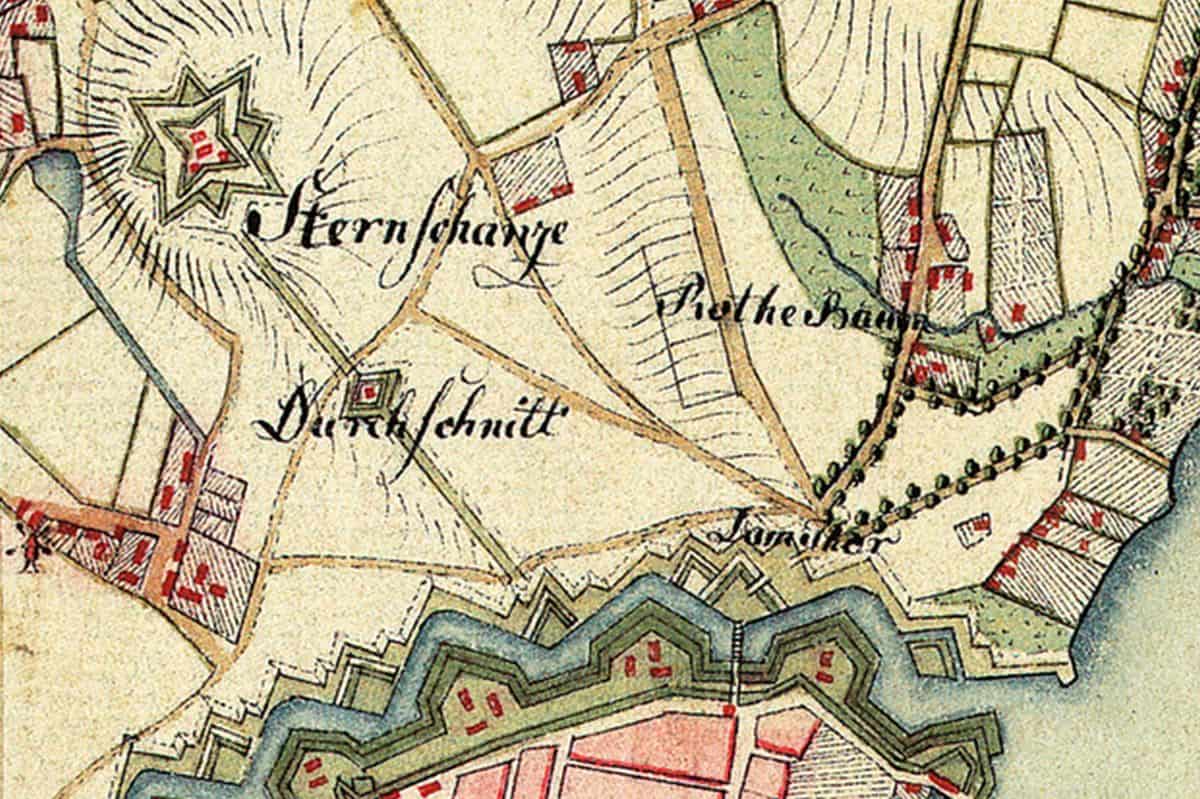 The name Sternschanze is derived from the star-shaped defensive fortification built in 1682, which was located in front of the bastion ring and connected to it via a running ditch. It served as a warning post and first line of defense and was able to successfully resist Danish attacks.
After the removal of the fortifications at the beginning of the 19th century, a water tower was built on this site in 1910.
Today this  water tower, already visible from afar, houses the hotel Möwenpick.
It is surrounded by Schanzenpark, strongly frequented due to its large offer of playgrounds, sports fields in the summer.
(Source: Wikipedia; Sternschanze) 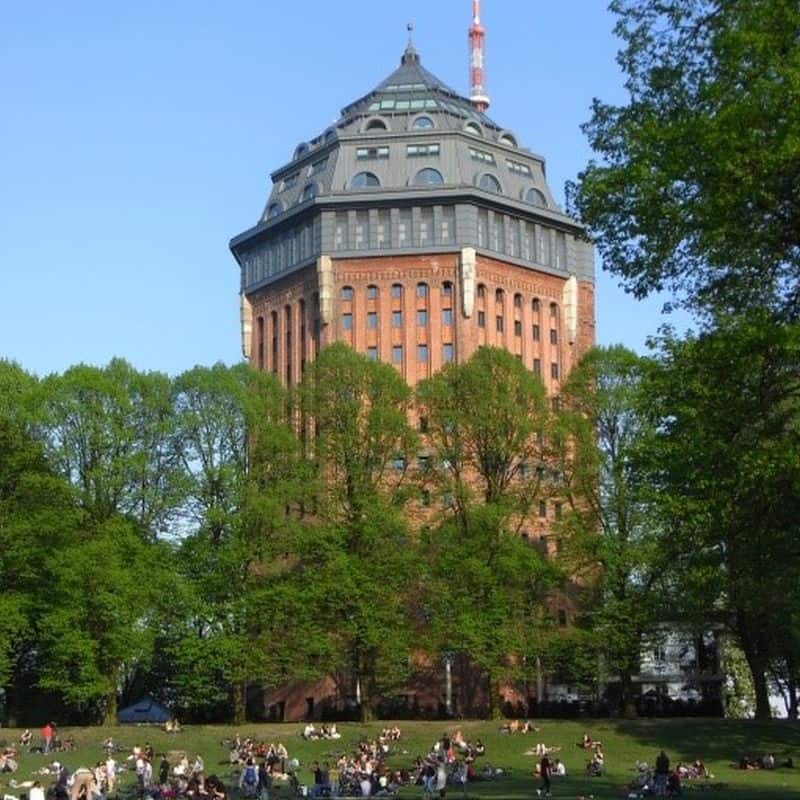 A hotel in the water tower

Due to its exposed location, the water tower can be seen from far away.
The water tower, which was built in the early 1910s, served as a reservoir for the city water supply until the 1950s and was decommissioned in 1961.
After various plans for a change of use, the tower was finally leased to Mövenpick Hotel& Resort under protest from local residents who feared losing the adjacent park as a meeting place.
In 2007, the 4-star trade fair hotel was opened and in its foyer, remnants of the tower’s interior can still be found, creating an interesting atmosphere.
The adjacent Schanzenpark is used as a green space, playground and sports field and is a popular meeting place beyond the neighborhood. 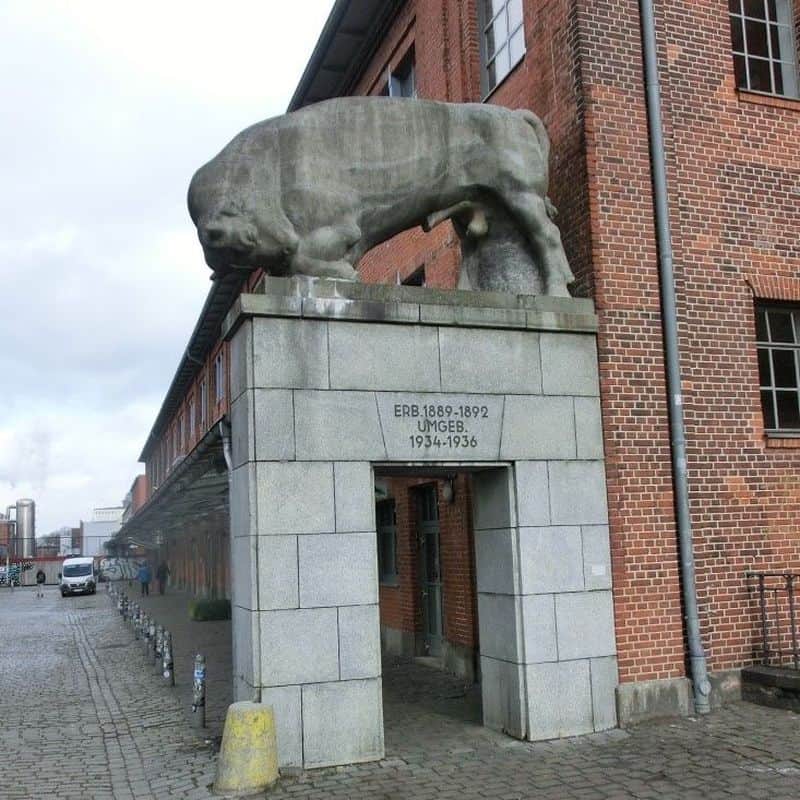 The bull bows his head

Until the 1980s, the Schanzenviertel was a residential and industrial district that was hardly noticed.
Looking at the hustle and bustle on the streets, the chic stores, cafes and pubs, one can hardly imagine the stench and noise that prevailed here 100 years ago.
Sternschanze and the adjacent Karoviertel district were shaped by the Central Slaughterhouse, which was built here around 1892. The slaughterhouse included several buildings for slaughtering, meat processing, spice factories, etc.
The location on the outskirts of what was then Hamburg was an obvious choice, as the Hamburg-Altona connecting railroad was built in 1864-1866. Sternschanze station was developed into a cattle station, providing work for many people and leading to the development of new workers’ quarters.
The slaughterhouse ended its work in 1996, leaving only meat processing plants.
Some of the former buildings have been converted into cultural and event spaces and gastronomy.
It is worth taking a walk, as the transformation is considered an example of a successful transformation of an industrial area.
An attraction at the transition to the Karolinenviertel is the flea market “die Flohschanze”, which invites visitors every Saturday to rummage for quirky things and bargains of all kinds.
In summer there are numerous city festivals with artistic performances of all kinds. 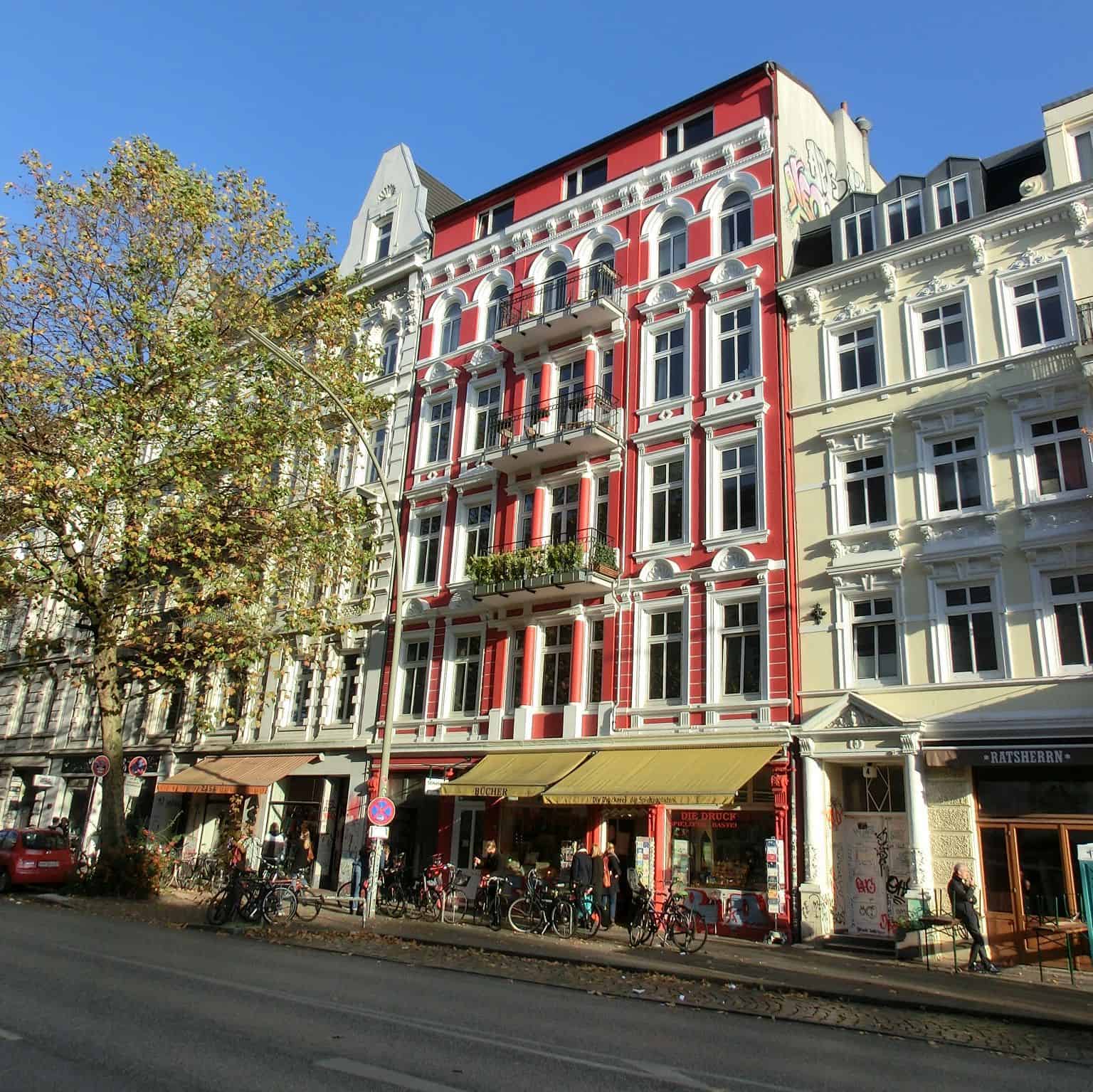 Why actually Schulterblatt?
The street probably got its name from an inn sign as early as the end of the 17th century. The innkeeper used the painted shoulder blade bone of a whale as a sign for his establishment.
Whaling ships of the Altona Greenland Company brought back killed whales and seals, which were processed mainly into tran.
The Schulterblatt, once an important shopping street in the district has now become a party mile late into the night, much to the chagrin of local residents.
The tourist occupation has led to an extensive and varied gastronomic offer and on the so-called Piazza, which has become a foam mile, numerous restaurants with their furniture take over the sidewalk.
This is where the border between Hamburg and Altona once ran, and if you look down carefully, you can spot the boundary stone embedded in the ground.
There are still some traditional stores that try to resist the change.
However, with this change of the neighborhood also came a politicization, especially from the left-autonomous circle.
The symbol of resistance is the Rote Flora, located opposite the piazza. 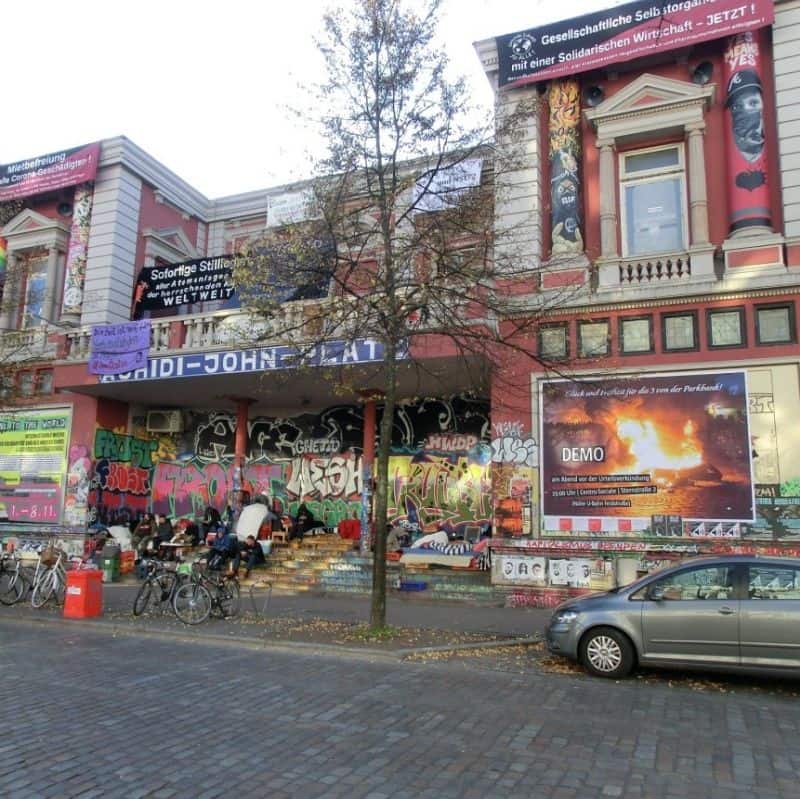 Known far beyond the neighborhood and Hamburg, the Rote Flora is still an occupation today.
In the 19th century, the Flora was a popular dance and revue theater with an extensive garden restaurant.
Although the building was badly damaged in World War II, it continued to serve as an operetta house until the 1950s, later as a cinema and finally as a depot for furniture.
The rear part of the former ballroom was converted into a garage hall before the Second World War and later into a bunker.
Today, the walls of the high bunker (also called “Kilimanschanzo”) are used as a climbing wall and for street artists.
When the city wanted to sell the property in the 1980s to an investor who intended to build a musical theater, large-scale protests and squats ensued, which caused the construction project to be stopped.
In 1988, the city dropped the new building plans at this location and a new musical building, the “Neue Flora”, was built on Holstenstraße instead. The “Flora” was occupied in 1989 and converted into a left-wing autonomous district center of the “Rote Flora”.
It is still a symbol of left-wing autonomous resistance today.