Blankenese, downstream from the Elbe, is definitely worth a visit. The Treppenviertel (staircase district), which lives up to its name, is particularly interesting. If you want to explore the Treppenviertel on foot, you should have healthy knees and good shoes, because countless narrow and often steep staircases lead up and down. However, pretty old fishermen’s houses with their colourful gardens and, time and again, magnificent views of the Elbe are more than worth making this special excursion. There are no benches to rest on; you will only find them if you hike the stairs all the way down to the Elbe beach, where nice restaurants invite you to eat.

Our greeter Sören picked us up at the Blankenese train station and walked with us through Blankenese, across the weekly market, through a park past the rear light and into the staircase district. On... 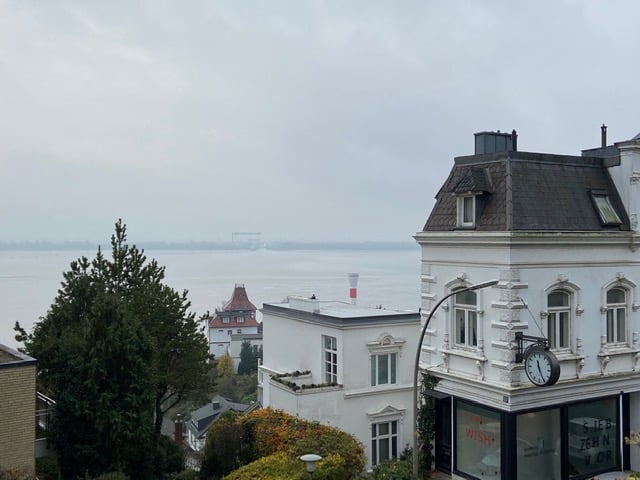 Blankenese can be reached from the main station with the S-Bahn S1. The name Blankenese comes from the Low German “blanke Ness”, which means as much as white headland. Today Blankenese has 13400 inhabitants and consists of a town center with a marketplace and a shopping street with many small stores, cafes and restaurants. A large Protestant church, built at the end of the penultimate century right next to the marketplace, with a very active congregation. The village is surrounded by numerous parks and stately country houses. In the “village,” as the people of Blankenes call their town, there are an unusually large number of banks, pharmacies, doctors’ offices and real estate offices, which says a lot about the age and wealth of the residents. The people of Blankenes look carefully at what they spend their money on; this is probably still in their genes from their descent from hard-working fishermen. Thus, it is far from them to spend a lot of money on a good meal, except for family celebrations in the star restaurant “Süllberg”. People like to live in nice big houses, but do not show their wealth to the outside world. A typical Blankenese resident can still be recognized by his ocher yellow corduroy trousers and green quilted jacket. Blankenese has many facets, and you should definitely explore them. 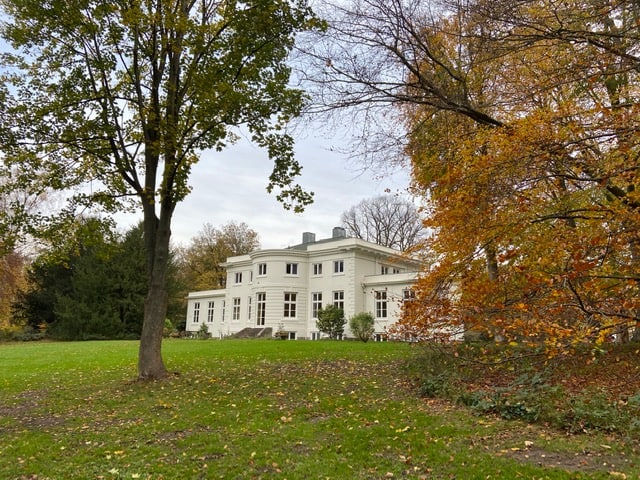 If you drive along the Elbchaussee in the direction of Blankenese, the first place you pass is Hirschpark. A park between the Elbchaussee and the Elbe with a centuries-old linden avenue, huge rhododendron plants and a large fallow deer enclosure. There is also a 250-year-old healthy, beautiful sycamore to admire, which can also grow twice as old. At the end of the 18th century, shipowners and merchants had already come to great prosperity through flourishing overseas trade and could now afford to escape the confines of their apartments above the counting houses in Hamburg’s old town to the Elbe. For example, the Hamburg shipowner J.C. Godeffroy commissioned the Danish architect Christian F. Hansen to build him a country house in Hirschpark. Hansen became famous for his white country houses with the typical columns on the facade, which he had copied from the Italian architect Palladio. At that time, such a journey by carriage to Blankenese was still very tedious and took many hours, so people only set out to spend the summer months in the stately homes. There is a little sister of the old linden avenue in Hirschpark in Baurs Park. If you are interested in contemporary architecture, you will find three architect’s houses there, among others, the English architect David Chipperfield has immortalized himself there with an interesting residential house. Chipperfield is the architect who was awarded the contract for the “Elbtower” at the end of the “HafenCity”. Other parks like the Goßlers Park with the Goßler House, the Hesse and Wilmans Park, all in English style, with huge old trees, are worth hiking. There is a lot of nature and wonderful views of the Elbe to enjoy. 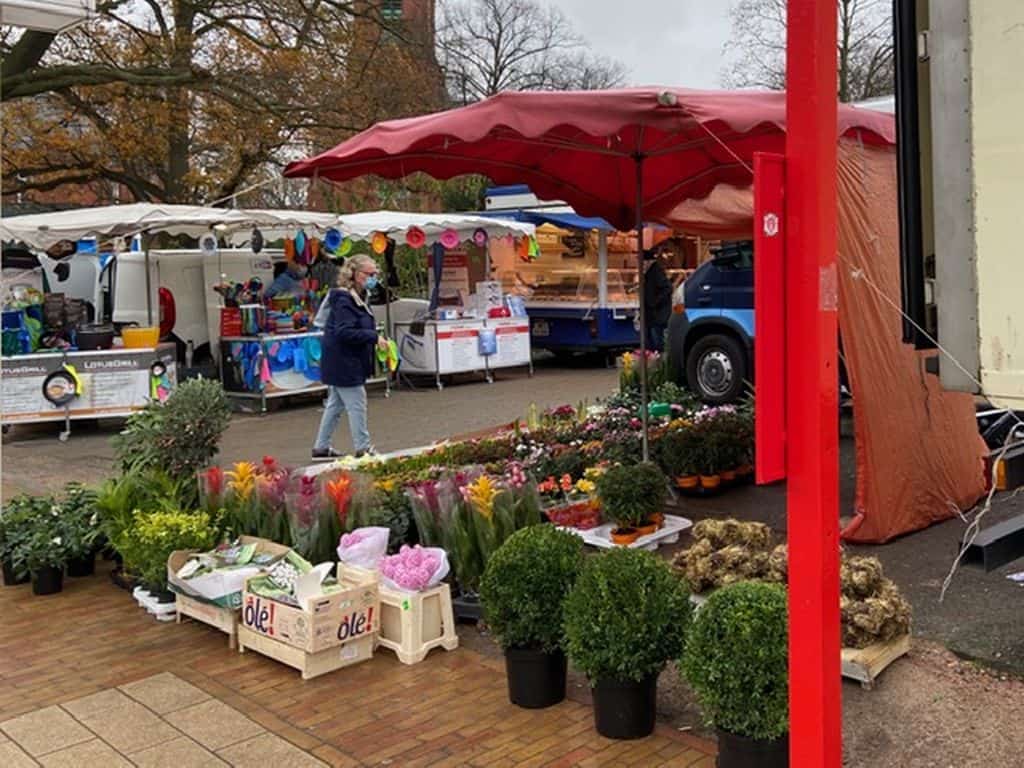 Hamburg shipowners and merchants who had become very wealthy bought plots of land in Blankenese at the end of the 19th century and built noble villas there in the Gründerzeit style. This was also the case with the shipowner J.P. Witt, who divided the large plot of land he acquired into parcels and sold them. A whole street was created, Witt’s Allee, named after him. Today, a special kind of flea market takes place here once a year, the owners of the stately villas open their front gardens and sell the most beautiful things. Popular is the weekly market in the center of the “village” Blankenese. The people of Blankenese say they go to the “village” and mean the place, they also say they go to “Hamburg” when they go to the city center. The market is held 4 times a week, on Tuesdays, Fridays even until 5 pm, and Saturdays, there is also an organic market on Wednesdays. Sold there is of course fruit from the “Alte Land”, from the other side of the Elbe and vegetables and flowers from the “Vier- und Marschlande”, in the Hamburg district of Bergedorf. Next to the market, several cafés, bakers, bistros and an ice cream parlor invite you to linger, and when the weather is nice, people like to sit outside for a coffee and meet friends or acquaintances. In the “Blankeneser Bahnhofstraße” there is still a post office and a large variety of smaller stores. You can also park there, and as far as we know, no driver has ever confused the gas pedal with the brake, as has happened 23 times so far in one of the other Elbe suburbs. So you can stroll and shop here relaxed. 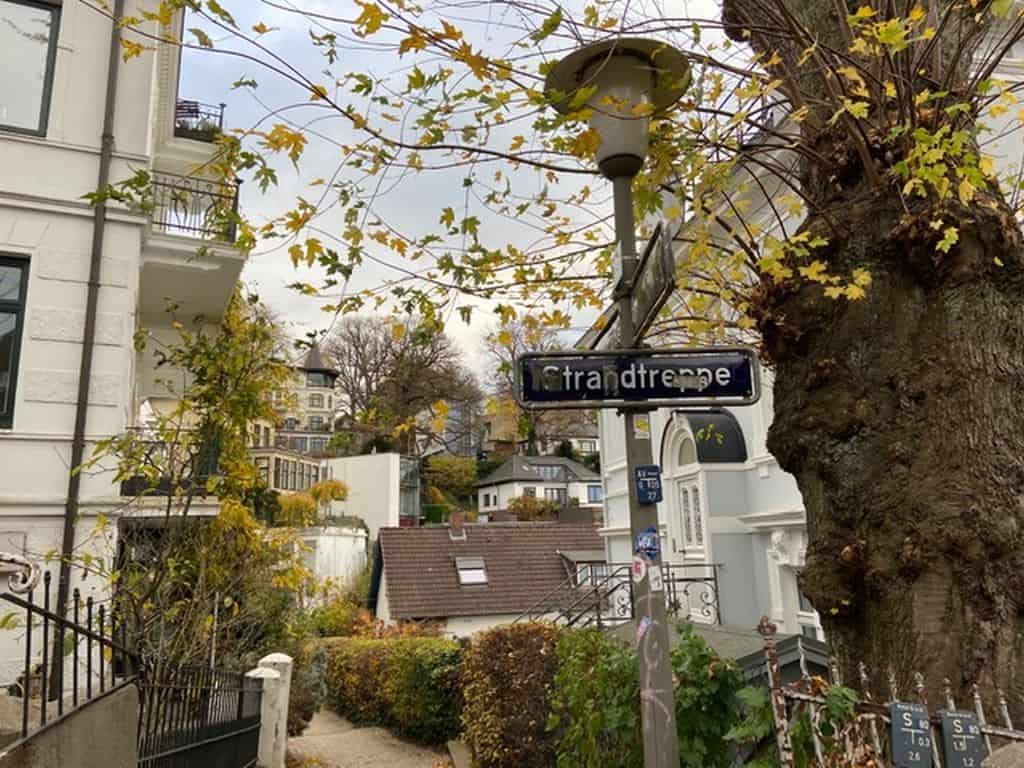 The picturesque stair quarter of Blankenese can look back on 700 years of history, and the mix of old and new houses can be reached on 58 stairs with almost 5000 steps. One can imagine what a high-performance sport this is for the letter carrier in wind and weather. Even the small bus of the HVV, the “Bergziege”, which runs every ten minutes, in a round trip, from the Blankeneser station through the narrow streets of the Treppenviertel via Strandweg and Waseberg back, often faces great challenges in winter. The oldest existing house is the Schubacks Haus from 1698. The fishermen who built their little houses there on the hillside had to work hard to feed their families. For the original fishing they built the “Ewer”, a sailing boat with a particularly flat bottom, later it developed into large cargo ships and in the end the container ships. In December you can find the “Ewer” as a shining official Christmas decoration in the streets and especially in a big tree in front of the church at the market place. Down at the Elbe, at the Strandweg, a lighthouse had to give way now, which belonged to the picture of the stair quarter since eternal times. For many Blankeneser a sad event. A second one is being dismantled in Baurs Park. New locations became necessary because the shipping channel from Mühlenberger Loch is being widened by more than 150 meters, thus changing the directional light line. A new lighthouse in bright red and white was installed next to the jetty “Op’n Bulln” and the second one in Hirschpark. One could write a thick book about the history and today’s Stair Quarter, there is so much to tell about this special place. You just have to take a look at it yourself.